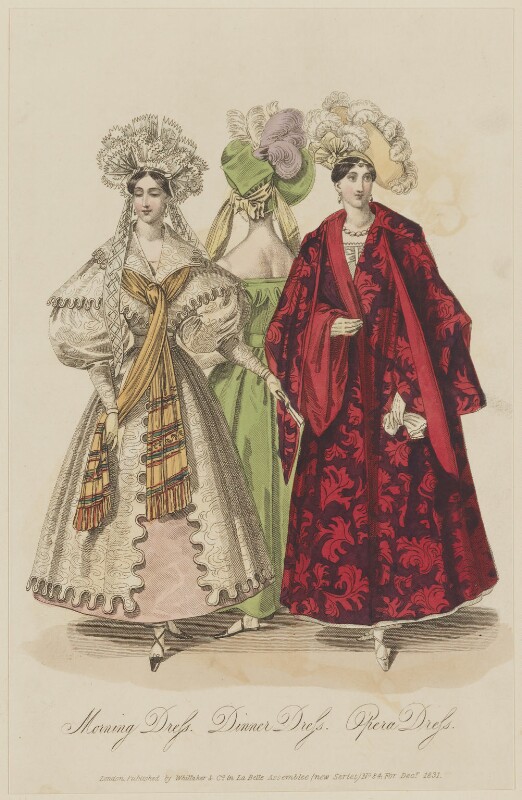 Described in the magazine:
Morning dress. An open dress, composed of white watered gros de Naples, over a pale rosecoloured slip. Corsage, of a novel form: the collar high, and sitting close to the neck behind, forms a lappel on the upper part of the bust; the corsage sits close to the shape, and is partially covered by a very large pelerine, rounded behind, but forming a coeur in front. The back of the collar, the whole of the pelerine, and the tour of the dress, are cut in dents de Liontine. The sleeves are à l’Amadis. The skirt is very ample; it falls in folds behind; is very open in front, and a little shorter than the under dress. The headdress is a blond lace cap, made very short at the ears; the trimming, which turns back, is a triple row of blond lace: it is sustained by a band of blue figured gauze ribbon, which terminates over each temple by a small knot formed of ends of ribbon. A wreath of ribbon surmounts the trimming on the summit of the head. The brides hang loose. The scarf is of gold-coloured gaze Algèrienne, with very rich ends.
Dinner Dress. A dress composed of emerald-green gros d'Orient. The corsage, cut very low round the bust, is finished by a lappel of the same material, cut round the border in a wreath of leaves, which are corded with satin to correspond. The lappel is square on the back and front of the bust, but becomes much deeper, and almost pointed, in the centre of each shoulder, where it forms a jockey. Short sleeves of the material of the dress, over which are long ones, à la Venitiènne, of blond lace. The head-dress is a chapeau à la Plater, of green velvet: the crown is in the form of a Polish lancer's cap; the brim is of moderate size, short and close at the ears, but wide over the forehead, and of a round shape: it is trimmed on the inside with a wreath en coquille, of blond lace. A bouquet of white and lilac ostrich feathers, with noeuds and brides of canary gauze ribbon, adorn the crown. The jewellery worn with this dress should be of gold and emeralds.
Opera Dress. A white crape dress over white satin. The corsage, cut very low, and dressed before in the Grecian style, is trimmed en mantilla, with blond lace round the back and shoulders. The sleeves are of the double beret form; the upper part excessively full, the lower much smaller. Manteau à la Polonaise, composed of a new and very rich material, a black gros des Indes ground, figured in crimson satin, very highly raised: it is made very ample, lined with crimson gros de Naples; has a large square collar, and an excessively large pelerine, pointed before, and in the centre of the back, and has large Turkish sleeves, sustained at the top by whalebone, so that they do not fall over those of the dress. The head-dress is a very pale amber crape beret, trimmed under the brim, on the left side, by a bouquet of short white ostrich feathers, which droop to the right: they are attached by a knot of canary gauze ribbon. A larger bouquet adorns the crown: the feathers fall in contrary directions over the brim. Ear-rings, &c. pearl.

Parliamentary Reform Bill is rejected by the House of Lords prompting riots in Nottingham, Derby and Bristol.

Michael Faraday demonstrates electromagnetic induction.
Death of Lady Sarah Ponsonby, last of the famous Ladies of Llangollen who attracted many of the leading names in art and literature to visit them at their home in Plas Newydd, Wales.
Opening of New London Bridge, designed by John Rennie.

Violinist Niccolo Paganini arrives in England from Italy and embarks on a six month tour of the country after astonishing London audiences with his virtuoso performances.
Revolutionary outbreaks in Modena, Parma and the Papal States influenced by the July Revolution in France the previous year.