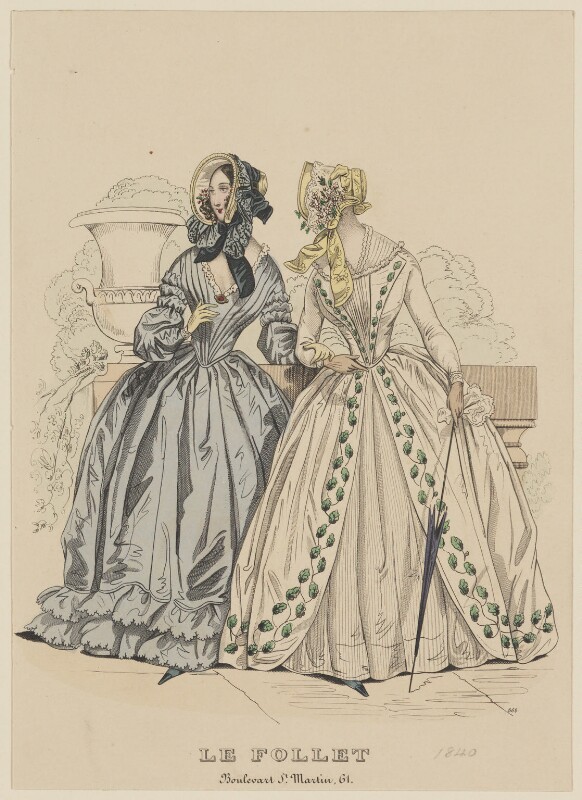 The plate was originally published in Paris in 'Le Follet' on 1 September. Described in the Court Magazine:
1st. Figure - Dress of pale lavender satin, corsage demi-décolletée (half high) made en coeur, with plaits or folds from the shoulder to the centre of the waist. The corsage is made without a point, but being cut full two inches longer in the centre of the front, than at the sides or back, it has the appearance of a slight one. The sleeves are plain at the top of the shoulder, with three bouillons, the remainder tolerably full, but much sloped away towards the wrist, where they are finished by a small poignet. The skirt is trimmed with two flounces découpé (cut out) at the edges in scollops, several small ones forming each large one. A small rouleau forms a heading to the upper flounce. Straw bonnet trimmed with black lace and velvet. This bonnet is very small and simple in its form, it will be perceived that it sits more closely to the face, particularly at the sides, than the bonnets have done for some time; and the crown, it may be observed, sits rather lower than on a level with the front, and is also small at top. A broad piece of black velvet, trimmed on one side with deep black lace encircles the crown, being fastened at the left side with a gold buckle, the ends being spread en eventail (like a fan); the bonnet is lined with white poux de soie. Hair in long ringlets, intermixed with flowers. Guipure cuffs, pale straw-colour gloves, green brodequins, the fronts kid and the backs satin. The dress is without a ceinture, the corsage being finished at the waist by a liseré.
2nd. Figure - Dress of white India muslin. The corsage of this dress is low, and perfectly tight at back, the fronts are also tight, and made en Amazone (like the fronts of a riding habit) that is the points turned back (see plate); the sleeves are perfectly tight to the arm, cut like those of a man's coat, with two seams, and put in without either gathers or plaits. The skirt is open in front, the lower corners rounded, and a light pretty trimming of green leaves stamped out in velvet and the little branch worked in flos silk, goes entirely round; this dress is worn over one of white gros d'Afrique (a ribbed silk) with a corsage à l'enfant, the chemisette, as well as the top of the corsage, has a ruche of tulle. Hat of jonquil poux de soie, made to sit as close as possible to the sides of the face, a deep fall of white blonde nearly covers the front of the bonnet, and a full bouquet is placed at one side. Embroidered handkerchief, parasol, gloves, couleur noisette, grey brodequins.
These dresses worn with light scarves are admirably calculated for wearing at races, &c.

Victoria marries her cousin, Prince Albert of Saxe-Coburg and Gotha; he is given the title of Prince Consort.
The Penny Black stamp is introduced by Rowland Hill; the first pre-paid, self-adhesive stamp, it marks the start of the modern postal system.
The start of the Irish potato famine, which by the time of its peak in 1851, had caused the deaths of one million, and contributed to the sharp rise of emigration from Ireland to England and America.

Beau Brummel, the fashion leader responsible for sparking the culture of 'Dandyism', dies of syphilis.
The first stone is laid on the new Houses of Parliament, based on the gothic designs by the architects Charles Barry and Augustus Pugin. The old buildings had burned down in 1834, following a blaze caused by burning wooden tallies used by the Exchequer to calculate tax.

The Afghans surrender to Britain during the Afghan-British war (1839-42). The war was sparked by British fear over Russian influence in Afghanistan, with the British East India Company resolving to depose the Afghan leader, Dost Muhammad, who was insistent on Afghan independence, and restore the former leader Shoja Shah.
The Maoris yield sovereignty of New Zealand under the Treaty of Waitangi. 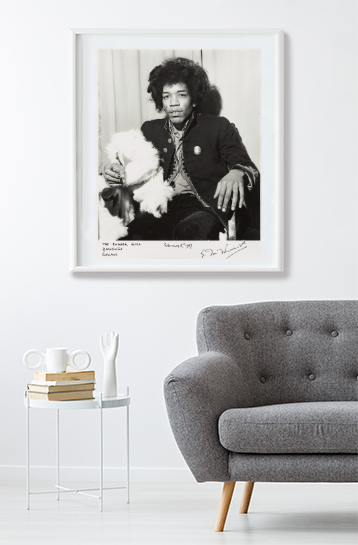