'The Fashions'. Walking dress for November 1860 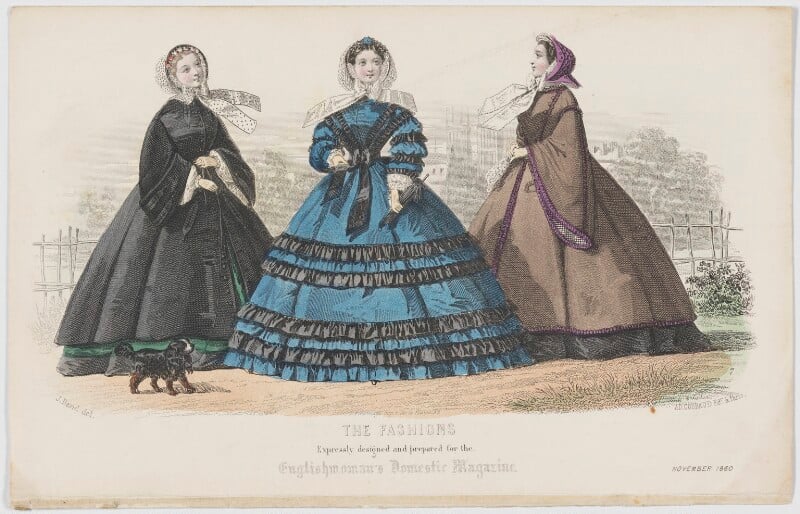 'The Fashions'. Walking dress for November 1860

Described in the magazine:
Fig. 1. - Walking Dress. - The bonnet is of black velvet, trimmed on each side with a long white feather, spotted with black; the bandeau is composed of red carnations, with a ruching of white blonde, which is continued on each side of the bonnet. The strings are of white silk, spotted with black. The mantle is in black velvet, trimmed with black watered ribbon, and buttons from the top to the bottom with large buttons and button-holes. The sleeves are large, with a deep, turned-back cuff; straps of ribbon, finished off in a point and button, are placed round the top of the body. On each side there is a pocket, trimmed with ribbon, put on in a point, and at each point a small button. Straps to match those on the body trim the cuff of the sleeve, and two of these are placed behind, at the bend of the waist. The dress is of green silk, with a piece of black moire antique at the bottom, six inches in depth.
Fig. 2. - The bonnet is composed of blue silk and black velvet; the foundation is of plain blue silk, and the crown in black velvet. A white blonde lappet is arranged on the front of the bonnet, and is fastened by a bouquet of blue flowers; the ends of this lappet fall down on each side of the bonnet. The bandeau inside is composed of ruched black lace, with a large bunch of blue flowers quite in the centre. The cap at the sides is of white blonde, and blue ribbon strings. The dress is of blue silk, trimmed with black and blue silk flounces. On the body are placed three small frills - one blue between two black - which increase in width towards the shoulders, and diminish towards the waist. The sleeve is composed of three blue puffings; the two top ones are divided by a black frill, and the cuff, which is very large, is trimmed with the same material. At the bottom of the skirt there are four flounces, three inches in depth, two blue and two black ones; then a space of twelve inches, and three more flounces, two and a half inches in depth. Puffed under-sleeves, with lace cuffs, and lace collar.
Fig. 3. - The bonnet is of violet-coloured silk, with narrow velvet, run on in squares. The front and curtain are faced with silk, and the facings on the front of the bonnet are fastened by three buttons; those on the curtain by one. These facings are finished off at the edge by a small chain-stitch. The bandeau inside is composed of ruched silk, the same colour as the outside, and the cap is of white blonde. Pardessus Medicis in cloth, lined with black and white checked silk, and trimmed with ruchings of violet-coloured silk. This garment fits tightly to the waist, and crosses on the chest from right to left. The sleeves are very wide, and very long, and are edged with gauffered ruches, put between the stuff and the lining; this ruche is an inch wide.

An early feminist movement, The Society for Promoting the Employment of Women is founded by Adelaide Anne Proctor, Emily Faithfull, Helen Blackburn, Bessie Parks, Emily Davies, Barbara Bodichon, and Jessie Boucherett.
The Florence Nightingale Training School for Nurses opens at St Thomas's Hospital, in London, funded from the testimonial fund collected for Nightingale following her war services, and helping to establish nursing as a profession.

William Morris and new wife Jane Burden move into the Red House, near Bexleyheath, Kent. The house, designed by Philip Webb, represents Morris's principle in interior design, that no object should be in a house that is not beautiful.
Ford Madox Brown paints The Last of England, showing a boat of emigrants leaving England under desperate circumstances, inspired by the emigration of the Pre-Raphaelite Thomas Woolner to Australia in 1852.

Italian unification continues as the Treaty of Turin brings much of Northern Italy under nationalist leader Cavour's control, who cedes Savoy and Nice to France. Garibaldi siezes the opportunity to invade Marsala in Sicily with his army of 1,000 redshirts, proclaiming himself dictator in the name of Victor Emmanuel II.
Republican Abraham Lincoln becomes President of the US, with only 39% of the popular vote.