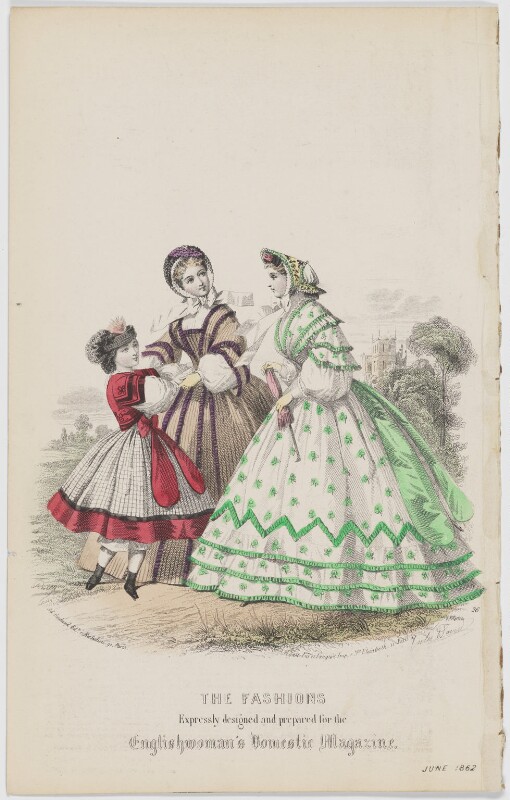 Described in the magazine:
Summer Toilet. - The bonnet is made of straw, embroidered in black, with a soft white silk crown, and is trimmed with tiny green silk ruches. The curtain is of embroidered straw, edged with green ruches; and the bandeau consists of a large rose, bordered on each side by a bow of velvet. The dress is made of the fashionable material called mousseline-de-soie, in white, with tiny green sprigs. It is arranged with a low body, cut square, over which a pelerine is worn, crossing in front, the ends being hidden under the band of the sash. The skirt is very much gored, and is ornamented at the bottom with three flounces, put on almost plain, edged with green ruches, whilst a vandyke of green ruching is laid on just above the flounces, which gives a pretty finish to them. The sleeve is very simple, and consists of two frills, one rather deeper than the other, trimmed to correspond with the rest of the dress. The sash, which is of plain green sarsnet ribbon, is cut with two rounded ends, each of the ends measuring a yard in length. This dress has the advantage of being useful for a morning or evening toilette. For the former, a muslin chemisette, full under-sleeves, and the pelerine should be worn; for the latter, a ruche round the low body, edged with lace, and a deep piece of lace in the sleeves, would make a simple evening costume for demi-toilette.
2nd Figure. - Morning Dress. - The bonnet is made of grey crin, trimmed with violets and black lace. The dress is of striped mohair, ornamented with pleated violet ribbon of a very bright shade. The body is cut square, behind and before, and is made with a band - the quilled ribbon being carried up the skirt, on the body, forming braces, and descending to the waist behind. The sleeve is open, pleated in to the armhole, and is trimmed with two rows of quilling. The chemisette worn with this dress is of fine French cambric, nicely pleated, and the under-sleeves are puffed, and confined to the wrist by a narrow insertion.
3rd Figure. - Little Girl's Costume. - The hat is of fine black straw, ornamented with a black feather, and Magenta tuft in front. The Veste Turco, which is now a very fashionable style of body both for ladies and children, is made of Magenta silk, trimmed with black silk, and braided in black. This veste is made very short in front, with the corners sharply rounded off, something like a Zouave jacket, and is worn over a white muslin chemisette and puffed under-sleeve. The sleeve is also very short, and consists of two pointed epaulettes. The sash of Magenta silk, bound with black, ornaments the chemisette in front. The skirt is composed of checked black and white silk, with a broad piece of Magenta at the bottom, headed by a narrower row of black. Dresses that children have grown out of may, with a little ingenuity, be made like our illustration, as, by ornamenting the bottom of the skirt with a different coloured silk, and by making a little veste, the old material would cut to advantage.