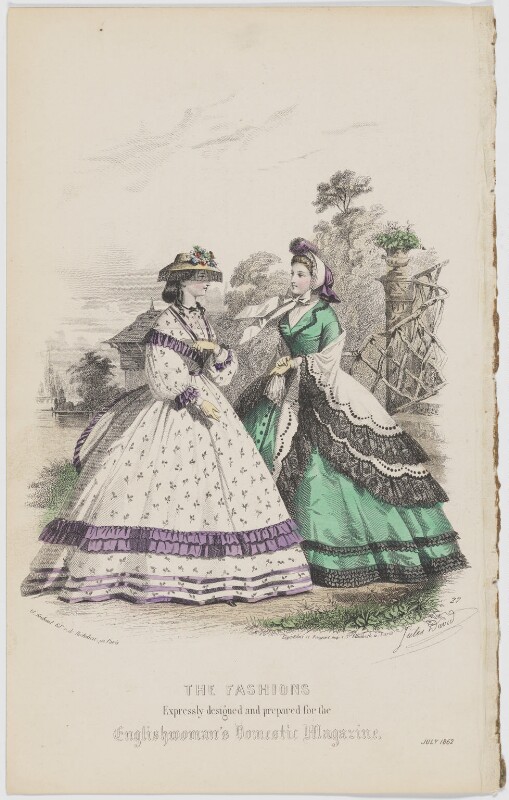 Described in the magazine:
Exhibition Toilet. - The bonnet is composed of white chip, with a soft mauve silk crown, and curtain of the same material. A plume of mauve feathers ornaments the top of the chapeau, and is arranged to curl over the front, and to form a portion of the bandeau. A quilled blonde cap and white strings complete the bonnet inside. The dress is of glacé silk, of a pretty shade of green, trimmed with black silk ruchings. The body and skirt are made in one, the former being cut high behind, and open in front, with revers which cross one another slightly, something like a double-breasted coat. The revers are trimmed with ruching, which is carried to the waist, and then again to the bottom of the skirt. The body is fastened by means of black silk buttons, these being also carried down the front of the skirt. Four tiny black frills, each one about one and a-half to two inches in width, are placed closely together at the bottom of the dress, then a space of green, and again two ruches of the same width as those at the bottom, the whole forming a new and not expensive trimming. The shawl is made of double muslin with rounded ends, and is trimmed with lace and black silk ruching, and embroidered in black in graduated dots. The edge of the shawl is scalloped, and the lace is slightly fulled on. Care must be taken not to put the lace on with too much fulness, as then the beauty of the pattern cannot be seen; but, on the other hand, sufficient fulness must be allowed to prevent the lace from being drawn and puckered. A square of white llama or grenadine would have an equally pretty effect as the muslin, and would be more durable. These shawls are very expensive articles to purchase ready made, but if a lady will take the trouble to embroider and trim one herself, she may arrange it for about half the sum she would have to give for it complete, and a better lace could be obtained. The embroidered dots may be easily accomplished by working them over and over in medium-sized purse silk. We may here mention that the green dress illustrated in this figure may be made with a body and pleated skirt, like an ordinary dress, when the mode we have just described is not liked. Arranged in this manner, the body would still have a very stylish appearance.
Country or Sea-Side Toilet. - The hat is composed of Leghorn, with a flat crown trimmed in front with a handsome bunch of artificial wild flowers, terminating in sprays on each side. The brim is edged with lace, which serves as a protection to the face, besides being very becoming. The dress is made of a material that is now extremely fashionable, and very elegant - white grenadine, sprigged with mauve. It is made with a low lining and high body, buttoned to the throat, over which a fichu is worn, crossed in front, and terminating in two long rounded cords behind, forming a kind of sash. The body is plain, and the sleeves are very full, confined at the bottom by a band just large enough for the hand to slip through, and trimmed with two mauve silk frills. The top edge of the fichu is ornamented with a cross-way band of silk, and the bottom by a frill to correspond with the rest of the dress. The bottom of the skirt is finished off by three bands of mauve silk, placed at intervals, and headed by two silk frills, laid slightly over one another. The width of the bands of silk at the bottom is one inch, the distance between the bands and frills four to five inches, and the width of each frill is two and a-half inches. A small turned-down collar and black cravat are worn with this toilet.