19 of 3329 portraits matching these criteria: 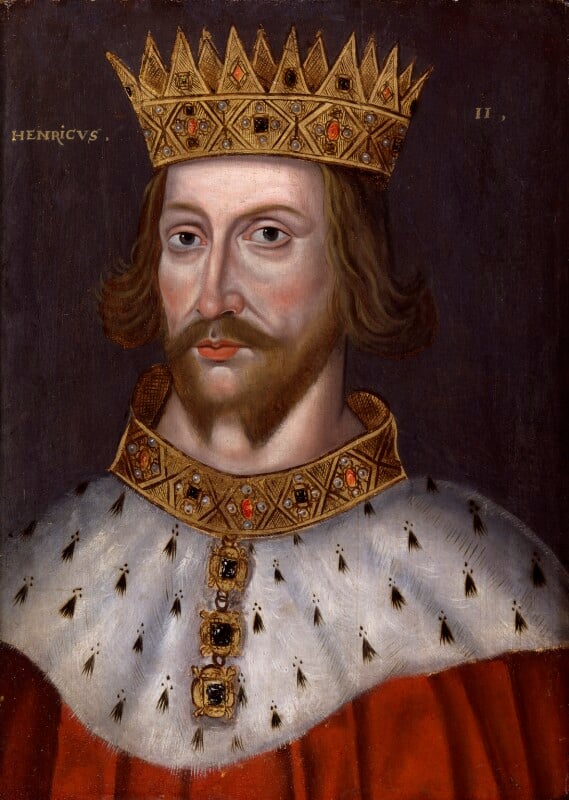 Summary
The portrait set is the product of a number of workshops; within this set, this portrait is linked to the portrait of William I.

Provenance
This portrait is part of a set of sixteen portraits of English kings and queens. The set was previously at Hornby Castle near Bedale, the North Yorkshire seat of the Duke of Leeds, where it was recorded hanging in a corridor gallery in catalogues of 1898 and 1902. Its previous history is unknown but it was possibly acquired for Hornby Castle by the Darcy family. The set was on loan to the Gallery from 1930, following the death of the 10th Duke of Leeds in 1927, and was purchased in 1974 from the 10th Duke of Leeds Will Trust.

Historical context
This portrait relates to the woodcut of Henry II in Thomas Talbot’s A Booke Containing the True Portraiture of the Kings of England (London, 1597) and may have been based on this image or a common source. It is possible that the woodcut was based on the king’s thirteenth-century effigy at Fonteuvrault Abbey in France.

Notes on attribution
This portrait is the product of an English workshop. The sixteen portraits in the set appear to have been sourced from several different workshops. Stylistic similarities to the portrait of William I (NPG 4980(1)) indicate that these two paintings may have come from the same source; this is supported by the fact that both panels contain wood from a common tree.

Justification for dating
Some of the paintings in the set are directly based on woodcuts from Talbot’s 1597 publication so it is likely that the set was produced after this date. Unlike the majority of sets of English kings and queens made after 1618, none of the portraits are based on engravings from Henry Holland’s Baziliologia, which was published in that year. It is likely, therefore, that this set was produced before the Baziliologia was published. The materials and methods used to produce this portrait are entirely consistent with paintings from this period; dendrochronology has indicated that the tree used for the panel was felled between 1592 and 1608.

Condition
There is some woodworm damage in the panel. The paint is in good condition, with some filling down the panel join.

Painting technique
Stylistically the painting is very similar to the portrait of William I, but the handling is softer, with more blending. The detail on the gilding is defined with brown lines in a comparable manner and the style of the inscriptions can also be compared closely. The technique is simple and straightforward: underlayers for the flesh and the background were applied first, followed by the gilding. The modelling and detail in the flesh and hair were applied over the underlayers, with soft blending wet-in-wet in the flesh. The black detail on the white fur was also applied wet-in-wet with a fine brush. The brown outlines on the hands were applied last, at the same time as the brown detail on the gilding on the crown and armour.

Drawing and transfer technique
Black underdrawing can be seen in the face and fur. The features, the beard and moustache and the gold collar are defined with strong outlines, often with a second line. The line of the chin, lines in the cheeks, temples and the hair were applied more freely and fine hatched lines were used for the shadows in the fur.

Other known versions
A portrait in the collection of Dulwich Picture Gallery, which was based on the engraving of Henry II in the Baziliologia is similar. It is probable that the Talbot woodcut was used as a source for the engraving. The Dulwich painting was produced in 1620 as part of a set.

© National Portrait Gallery, London
Reverse 01. Back of the panel in raking light…

The panel appears stable. There is wood loss at the upper-left corner and the right side has been weakened by woodworm damage. Some of the filling down the panel join is a little uneven. Several areas of restoration have darkened; these include restoration on a diagonal scratch in the centre right and some parts of the background at the top and on the left. The varnish is even and semi-glossy.

The panel is reasonably flat and appears stable. Old woodworm damage is visible alongside the left-hand join (from the back). A number of worm holes have protruded through the paint surface. The upper right-hand corner of the panel (from the back) has been weakened by worm damage in the past, and some wood has been lost at the corner.

For analysis the boards were labelled A and B from the left (from the front). Both boards retain sapwood at their outermost edges and the presence of sapwood means that a felling date range can be applied to the panel. The sequence of tree rings obtained from the two boards did not cross-match, but the sequence on board A matched very strongly with board A on the portrait of William I (NPG 4980(1)), which indicates that they derive from the same tree. The date of the last measured ring on board A of the Henry II panel is 1585. Adding the minimum and maximum expected number of sapwood rings suggests that the two board A's were felled between 1592 and 1608, and that the tree for board B was felled between 1592 and 1602. The two linked panels are narrower than the others in the set.

The panel join and wood grain can be seen in x-ray (see x-ray mosaic 01). The brushwork is clearly visible, particularly the paint applied wet-in-wet in the fur. It is clear where the paint for each area is painted to the edge of the reserves and the hair was evidently applied before the background.

Black underdrawing can be seen in the face, and fur using infrared reflectography (see DIRR01). The features, the beard, moustache and the gold collar are defined with strong outlines, often with a second line reinforcing the marks. The line of the chin, the lines in the cheeks, temples and the hair were applied more freely and fine hatched lines were applied for the shadows in the fur.

Paint samples were taken for analysis in April 2011.

The panel is prepared with a chalk ground. There may be a warm grey priming but this was not obvious in the paint samples.

Paint
Red robe
Sample 1: Cross-section shows a chalk ground with three layers over it. There is a dark red underlayer, or possibly priming, which contains fine black and red and occasional large particles of white. A bright layer of opaque red containing good quality vermilion, lies over this layer. There are traces of a possible glaze on top.

Letter C
Sample 2: Dispersion contains classic lead-tin yellow with some kind of silicaceous filler and a little white; this is possibly lead white, but rod shaped.

Background
Sample 3: Cross-section shows a chalk ground with two layers above it. There is a little red lead in the ground which might indicate traces of the priming. Over the ground lies a thin layer, which is possibly the priming layer. This contains earth pigments, creating a warm grey. The layer above this is restoration.

Gold collar
Sample 4: Dispersion contains gold leaf and red and yellow earth pigments, which are probably part of the underlying mordant for the gold. There is also a trace of red lead that appears to be in the mixed brown used for the decoration on the collar.

Painting style and method
Dendrochronology has linked this painting with the portrait of William I (NPG 4980(1)) from the same set, and stylistically they are very similar. However, although the painting method is very similar, the handling is softer and less crisp, with more blending. Detail on the gilding is defined with brown lines in a similar manner.

Preparation layers
The panel was prepared with a chalk ground. The colour of the priming may vary in different areas: dark red was visible beneath the cloak and a grey was found in a sample taken from the background. The underdrawing was carried out in a carbon containing medium.

Eyes
There is some slight wet-in wet blending in the lower edge of the eyelid, which might indicate eyelashes. This does not compare with the treatment of the lashes in the portrait of William I (see micro 01 and micro 02).

Beard, eyebrows and hair
The paint mixture for the brown underlayer was clearly medium-rich and has a fine drying craquelure that has exposed the white priming. Detail on the hair was applied over the underlayer. The details on the beard were painted relatively thinly with soft blending. The modelling for the flesh was applied before the final hairs on the beard and hair (see micro 05).

Costume and crown
The gilding was applied over a warm light brown mordant, applied before the flesh paint (see micro 06). A thin grey layer was applied over the priming before the white ermine was applied. The paint for the red robe was applied before the white fur. The red paint is medium-rich and there is a fine drying craquelure and consists of good quality vermilion with a thin red glaze applied over it. The brushstrokes were brought up to the edge of the reserve, where the priming and the grey underlayer for the ermine can be seen. The black detail of hairs in the fur was applied last, painted wet-in-wet with a fine brush (see micro 07). Fine white hairs were applied to the edge of the ermine to overlap the red costume. The details on the gilding are drawn in paint with brown lines.

Background and inscription
The first layer for the background was applied at an early stage. The final layer for the background was applied thinly with a broad brush at the end of the painting process, leaving a strong streaky texture in the paint surface. The paint mixture appears to be a reasonably dark brown containing earth pigments, opaque red and black, but the surface is grey where there seems to be some deterioration. Abrasion has exposed the dark brown beneath the grey on the surface. The inscription was applied last, painted with a mixture containing lead-tin yellow and some orange particles (see micro 04). The style of the inscription is close to that seen in the portrait of William I (NPG 4980 (1)).

A thin opaque varnish layer is visible in ultra violet light, and restoration at the top edge appears dark (see UV 01). There are a few other scattered areas of restoration.

Carved and ebonised frame with Egg and Dart motifs.