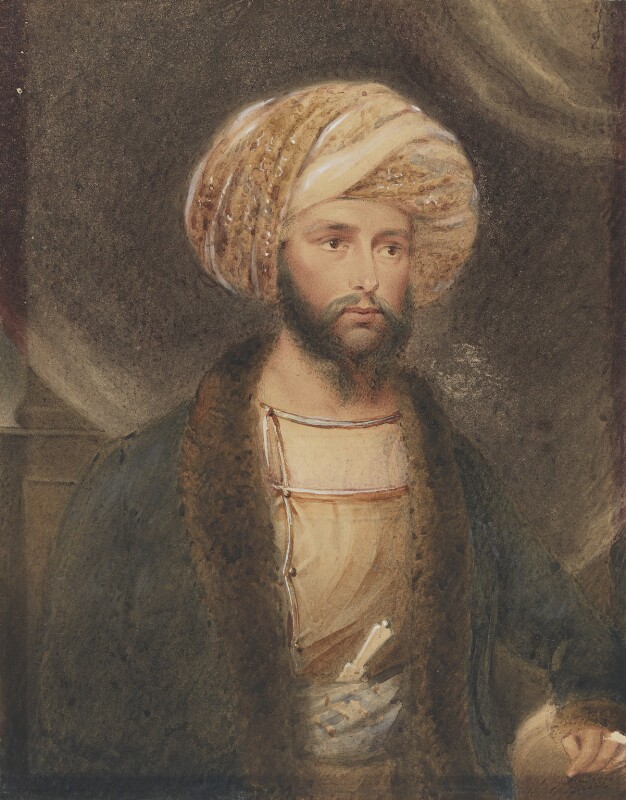 Inscribed in ink on an old label (formerly mounted behind the water-colour): Painted/by/B. Baldwin/London 1841

This water-colour shows Abbott in the Afghan costume in which he made his hazardous journey from Herat to Khiva to Russia, bearing the offer of the khan, Hazrat of Khiva, for the release of Russian captives detained in slavery by him. He set out in December 1839, and, after various adventures during which he was wounded, reached Russia in May 1840. He then proceeded to St Petersburg to complete the negotiations, and on his return to England received the thanks of Lord Palmerston, then foreign secretary. The water-colour was evidently painted to commemorate his famous journey. A companion water-colour of an Afghan whom Abbott brought back to Europe with him is still in the collection of Miss Werge Thomas, together with most of Abbott's papers. The water-colour of Abbott has clearly faded; Miss Werge Thomas remembered that the 'Afghan turban had once many colours' (letter of 28 April 1967). She also recalled that Abbott used to stand before the painting, when he was old, and say, 'Is that me?'. B. Baldwin exhibited three portraits at the RA, 1842-5, but is otherwise unrecorded. A coloured photograph of Abbott, showing him as a general in the Bengal Artillery, and other photographs of him are owned by Miss Werge Thomas. No other portraits are recorded.

Healthy complexion, brown eyes, dark brown beard. Dressed in a light brown under-garment, blue sash with a bone(?)-handled knife sticking out of it, dark brown over-garment with a fur(?) collar, and a brown and white turban. Pale brownish-grey curtain covering most of background, grey pillar and plinth at left.

By descent to the sitter's son, Raymond Abbott; Miss E. Werge Thomas, presented by her, 1967.