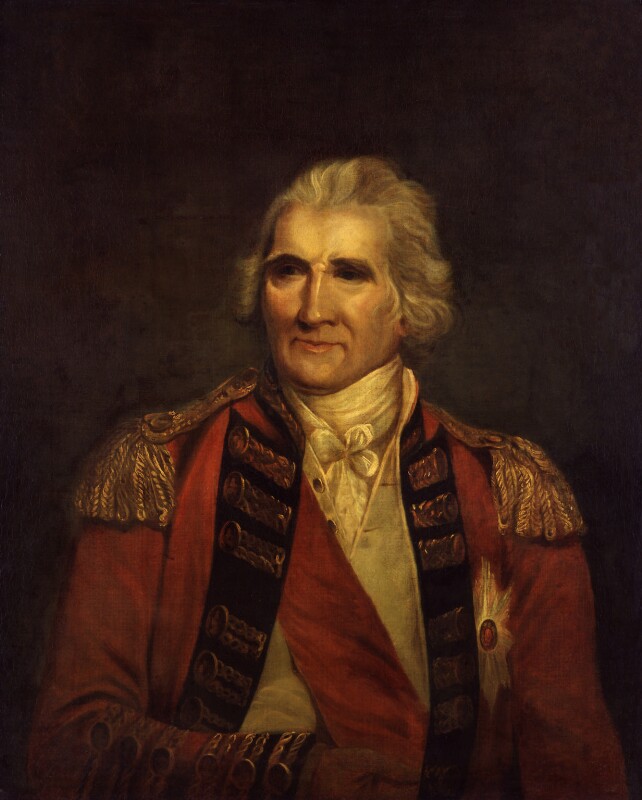 A paper label on the back, probably written by Alfred Jones, the donor, reads: General Sir Ralph Abercromby 1734-1801/His honour as a soldier was untarnished/Robert Edge Pine, Pinxit/Collection Alfred Jones of Bath.
Christie's stencil 885A or 855A (probably late 1873).

Hoppner's original portrait, then in possession of Henry Dundas, later Lord Melville, was engraved in mezzotint by S. W. Reynolds and then exhibited RA 1799 (63). Dundas's daughter married Abercromby's son and the portrait remained in the Abercromby family collection until the Abercromby sale at Christie's 14 July 1911 (94), bought Gooden & Fox; its present location is unknown. A replica, descending through Abercromby's grandson Lord Dunfermline, is in the Scottish NPG. A version at Luffness House (Major Hope) was exhibited at the Lyceum Club, Edinburgh, in 1951. Two whole length adaptations by Colvin Smith are in the Scottish NPG and the former United Service Club, London, 1836. W. McKay & W. Roberts, John Hoppner R.A., 1909, pp 1-2, list other versions or studio repetitions, and a slightly different type, three-quarter-length with a cannon.
The NPG copy, date uncertain but probably early or mid-nineteenth century, has a provenance at present untraced beyond 1909, the date of its acquisition. The contraction of the eyes caused by Abercromby's well-known myopia is particularly noticeable and the copyist could conceivably be W. Haines who painted a copy engraved by H. R. Cook for Gifford's History of the Wars, 1817. It is perhaps more likely to be one of the ten copies by Colvin Smith listed in R. C. M. Colvin-Smith, Life and Works of Colvin Smith, 1939, p 72. The label on the back attributing the portrait to Robert Edge Pine can be discounted; Pine is not known as a copyist.
A pencil drawing by Henry Bone dated 1808 for an enamel miniature copy is in the NPG library (Henry Bone’s annotated pencil drawings for miniatures and enamels, I, 85).

(of Hoppner's original)
Mezzotint by S. W. Reynolds published 1 February 1799 is lettered: Lieutenant General Sir Ralph Abercrombie K.B. (example in British Museum); mezzotint by S. W. Reynolds 4 June 1801 and stipple by F. Bartolozzi, 1 January 1802 are both lettered: SIR RALPH ABERCROMBIE/Knight of the Bath/From the original Picture in the Possession of the Right Honorable Henry Dundas, to whom this Plate is, by permission, respectfully Dedicated, by his obliged Servt John Jeffryes. Smaller prints of Hoppner's portrait were popular and appeared frequently as illustrations for example by W. Ridley in The European Magazine, June 1801, by H. Meyer published T. Egerton, Whitehall May 1803, by H. R. Cook (1815), for C. H. Gifford's History of the Wars, by W. Finden for Lodge's Portraits (1830) and by Cook for Jerdan's National Portrait Gallery (1832). Three-quarter-length variants leaning on a cannon were also produced.