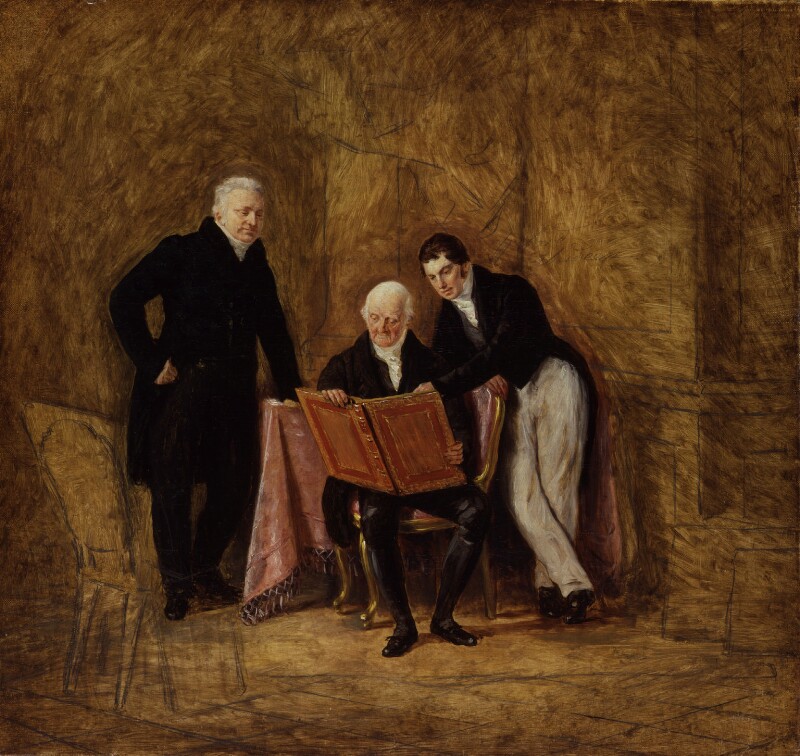 Inscribed in pencil above their respective heads: Lord Farnborough, Abraham Hume, Lord Aberdeen.
Old labels on the back indicate their relative positions.

The four groups (NPG 792-5) are preliminary studies for a large picture of an imaginary gallery hung with pictures from famous collections in England. The idea was conceived by General Sir John Murray who already owned a similar picture by Gonzalez Coques, probably a version of the famous Coques Picture Gallery in the Mauritshuis, of which a variant is at Windsor Castle and others were well-known at the time. Lord Egremont owned one by Teniers, of the Archduke Leopold's Gallery. Murray commissioned Pieter Wonder to paint its English companion with the collectors grouped in the foreground and about 40 well-known Old Masters hanging on the walls. Pieter Wonder came over from Holland in about 1822 under Murray's aegis and exhibited in London 1823-31, his last work being at the British Institution 1831 (345) - 'An Interior of a Picture Gallery with Portraits 5ft 7in x 7ft 4in', presumably the finished work for which the groups are studies.
Charles Long, Trustee of the British Museum since 1812 and an original Trustee of the National Gallery, known as 'the Vitruvius of the present age', owned a famous gallery of pictures and sculpture at Bromley Hill Place, Kent. He married Sir Abraham Hume's eldest daughter Amelia and bequeathed to the National Gallery an important group of Dutch and Flemish pictures, Reynolds's Infant Samuel and Canaletto's View of Venice. Abraham Hume's enormous collection of pictures, mainly Venetian, was sold with a Descriptive Catalogue in 1824. He owned Titian's Death of Actaeon, bought for the National Gallery in 1972, and was painted three times by Reynolds who bequeathed to him the choice of his Claudes.
Aberdeen qualifies for inclusion in the 'Imaginary Gallery' presumably for his position as President of the Society of Antiquaries 1812-46, for his authorship of seminal works on Greek and Roman architecture and, as Foreign Secretary in Wellington's Cabinet, for his close concern with the acquisition of the Elgin Marbles. He was also an original Trustee of the National Gallery and at that time owning Titian's Allegory of Prudence (NG 6376, acquired 1976).
William Seguier, if it is he holding a paper at the extreme right of the 'Imaginary Gallery', had been adviser on picture collecting to the Prince Regent, Peel, Holwell-Carr and others, appointed first Director of the National Gallery in 1824, and Director of the British Institution. He was possibly the owner of the Roubiliac bust of Pope. His portrait by Jackson, painted for Taylor in 1830, was presented to the National Gallery by his great-grandson in 1950 (NG 6022).

Farnborough, grey-haired in black suit, stands to the left. Hume, white-haired in a black suit, sits in the centre holding a red and gilt leather-bound book. Aberdeen, brown-haired in black coat, light grey trousers, grey waistcoat, white shirt and stock, stands to the right. Purple and gilt chair, purple table-cloth, unfinished brown background with architecture sketchily indicated in pencil, unfinished chair with pentimenti to left.
In the finished 'Imaginary Gallery', to the right of this group, stands William Seguier, the first Director of the National Gallery.