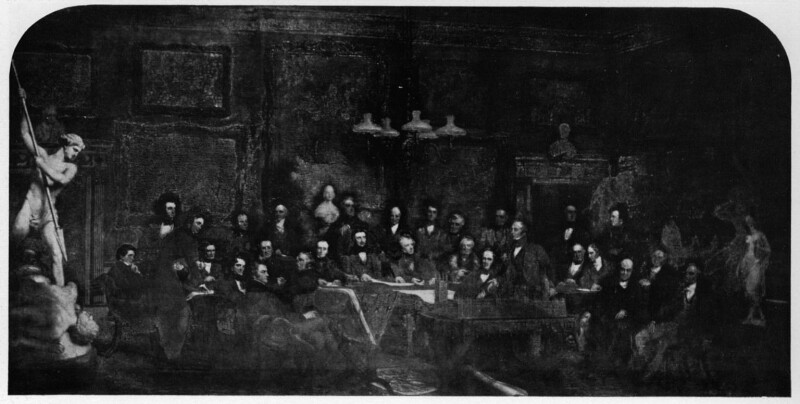 The Fine Arts Commission was appointed in November 1841 to consider the decoration of the newly rebuilt Houses of Parliament, with a view to 'promoting and encouraging the Fine Arts' in England. The Palace of Westminster had been burnt down in a spectacular fire in 1834, and had forced on the state a large measure of public patronage of the arts. In 1835 a Royal Commission had chosen Charles Barry as the architect of the new Palace, after a widely advertised competition, and by 1840 his building was far advanced enough to consider the question of suitable decoration. With the growth of interest in history painting, stimulated by the successes of the French and German schools, the time seemed ripe for an ambitious series of murals celebrating the nation's achievements. A select committee of 1841, called together to consider the whole issue, listened to a number of expert witnesses, and discussed a variety of questions, for instance, the most suitable technique for mural painting, the most appropriate subjects, and the best method of selecting artists. They recommended that a commission should be set up to deal with the whole question of decoration for the new building. Peel, the prime minister of the day, appointed Prince Albert as the president of the Commission (it was a suitably safe and unpolitical field of activity for the young and inexperienced Prince), and Charles Eastlake, probably the most knowledgeable art historian of his time, as secretary. The Commission included a number of figures who had already sat on the Committee, or had been called as witnesses: Sir Robert Peel; Sir Robert Inglis, a Tory MP and a vice-president of the Society of Antiquaries; Lord Francis Egerton, the great collector; Benjamin Hawes, an MP, on whose motion the Select Committee of 1841 had been set up; Thomas Wyse, a traveller, scholar and educational reformer; Henry Gaily Knight, a traveller and author of several architectural books; and George Vivian, who had been on the Commission of 1835 which selected Barry as the architect. The Commission included a number of statesmen and politicians: the Marquess of Lansdowne; the Duke of Sutherland; Viscount Morpeth (later Earl of Carlisle); Viscount Melbourne; Sir James Graham; the Earl of Aberdeen; Viscount Canning (later Earl Canning); Viscount Palmerston; Lord John Russell; Lord Lyndhurst; Charles Shaw-Lefevre (later Viscount Eversley); and the Earl of Lincoln (later Duke of Newcastle). Two military men were included, Lord Colborne and Lord Willoughby De Eresby; the financier, Lord Ashburton; the historians, Thomas Macaulay, Viscount Mahon (later Earl Stanhope), and Henry Hallam; the poet, Samuel Rogers; and the architect, Charles Barry.
The whole history of the Commission - the competitions it organized, the artists and subjects it selected, the frescoes and statues that were actually completed - is extremely complicated, and was attended with endless problems and controversies, not least the enormous volume of comment in the public press. It is discussed in great detail in T. S. R. Boase's excellent article, 'The Decoration of the New Palace of Westminster, 1841-1863', Journal of the Warburg and Courtauld Institutes, XVII (1954), 319-58, on which this short description is largely based. If, in the final analysis, the attempt to create a form of high art, in keeping with the spirit of the new Victorian Age, was, almost inevitably, a failure, and no more than an interesting incident in the history of English art, it was the most notable example of state patronage in England since the Middle Ages.
This picture is now a complete ruin through the effects of bitumen, and is only preserved as an interesting relic. It is discussed in detail in the Burlington Magazine article referred to above. Partridge, who was portrait painter extraordinary to the Queen, and a friend of the Prince Consort, was probably encouraged by the latter to undertake the group picture of the Commissioners, though he never received an official commission [1]; the artist presumably hoped that the picture would re-establish his reputation after his row with the Royal Academy. [2]
Partridge's picture represents the Commission as it was constituted in 1846, and includes twenty-eight figures. Prince Albert executed a drawing for him to show the position of members at a particular meeting (NPG 343b), but Partridge did not follow this seating plan, and his portrait is inevitably a more generalized statement. He chose an idealized setting for the picture, grouping a number of famous paintings and sculptures by English artists around the room:

'The two-fold object of the Picture is to commemorate the extension of Government Patronage to the Fine Arts, in the decoration of the New Houses of Parliament, and to present an assemblage of the eminent men appointed to carry this purpose into effect. The locale of the Meeting is Gwydir House [Whitehall]; and (with a view to illustrate the previous state of Art in England, as well as to relieve the monotonous effect of an unfurnished room, and a mass of sombre unpicturesque costume) an imaginary collection of the works of our principal deceased Artists, has been arranged on the walls, and throughout the apartment.' (pamphlet, p 1)
A list of the works of art depicted is given in the Burlington Magazine.
Partridge appears to have begun making studies for the picture as early as 1844 or 1845, and Macaulay's letter of 1853 (see footnote) makes it clear that the group was still unfinished in that year. A complete list of studies, together with various manuscript datings and letters from sitters, is given in the Burlington Magazine. The four studies in the NPG of Aberdeen, Macaulay, Melbourne and Palmerston are catalogued individually under each sitter's name. No description of the big picture is possible in its present condition. The people represented in the group are as follows (the list is alphabetically arranged):

1) This is borne out by two letters written by Macaulay. In the first, to an unidentified correspondent (30 May 1849, collection of Dr A. N. L. Munby, Cambridge), he writes: 'One of the pictures for which I am sitting contains numerous figures, and will, when it is finished, be the property of His Royal Highness Prince Albert'. In the second to J. E. Denison (25 April 1853, collection of Colonel W. M. E. Denison, on loan to the University of Nottingham), he writes: 'I am sitting to another artist for a group which Prince Albert has ordered'. That this was NPG 342 is proved by an entry in Macaulay's 'Journal' (26 April 5853, Trinity College, Cambridge): 'lost the morning in sitting to Partridge'. I am most grateful to Thomas Pinney of Pomona College, California, for pointing out these references. They are not included in the Burlington Magazine article.
2) See Partridge's pamphlet, 'On the Constitution and Management of the Royal Academy' [1864], in which he airs his grievances.