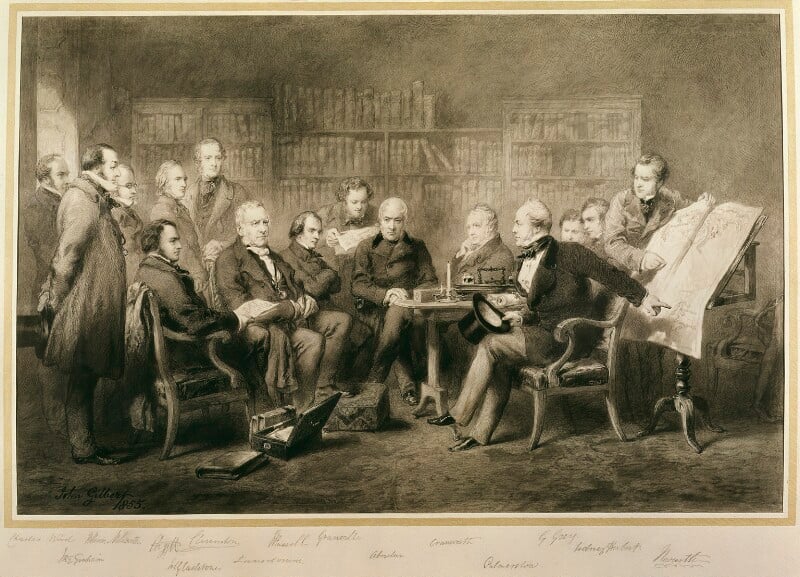 Signed and dated (bottom left): John Gilbert/1855.
Inscribed on the mount in pencil are copies(?) of the autographs of the sitters, as they appear on the engraving. Also on the back is a label relating to the 1897 exhibition.

The coalition ministry, under the leadership of the Earl of Aberdeen, came to power in 1852, following the short-lived tory administration under the Earl of Derby. It included the leading whig and Peelite statesmen of the period. The outbreak of the Crimean war in March 1854 found the army woefully unprepared, and the early set-backs and the controversies over the conduct of operations further undermined an already weak and divided cabinet. In January 1855, Aberdeen resigned, to be succeeded by Palmerston, who brought the war to a successful conclusion in 1856.
This grisaille drawing was specially executed for the engraving of the same subject by W. Walker (the vendor), published by him, 1857 (example in NPG). Both drawing and engraving are almost identical in size and general arrangement. There are several differences between the two, however, in the poses, features and costumes of the sitters, and in the accessories. Gilbert's likenesses, for which he does not appear to have received sittings, were altered and strengthened by Mrs Elizabeth Walker prior to the engraving, and his mannered and expressive draughtsmanship smoothed away.
NPG 1125 shows Aberdeen's cabinet deciding upon the expedition to the Crimea in the early months of 1854. Palmerston, on the right, is seen pointing at the town of Balaklava on a map of the region held open by the Duke of Newcastle. Gladstone, on the left, is holding a letter on his knee, and Lord Granville in the background is absorbed in reading a newspaper. These attempts to introduce drama and life into the composition are not successful, and the picture retains all the features of a rather stiff and self-conscious group photograph. Engravings of the successive cabinets of the day became popular from the mid-19th century onwards, and that of Aberdeen's is one of the earliest. Gilbert, a pioneer of pictorial journalism, later helped to prepare the design for Scott's engraving of Derby's third cabinet, after a painting by H. Gales, published Graves, 1870 (example in NPG).
The following list of people represented in NPG 1125 is arranged alphabetically. The office of each sitter is noted after his name. An asterisk denotes that other portraits of the sitter are included in this catalogue:

Commissioned by William Walker, the engraver, and purchased from him, 1898.