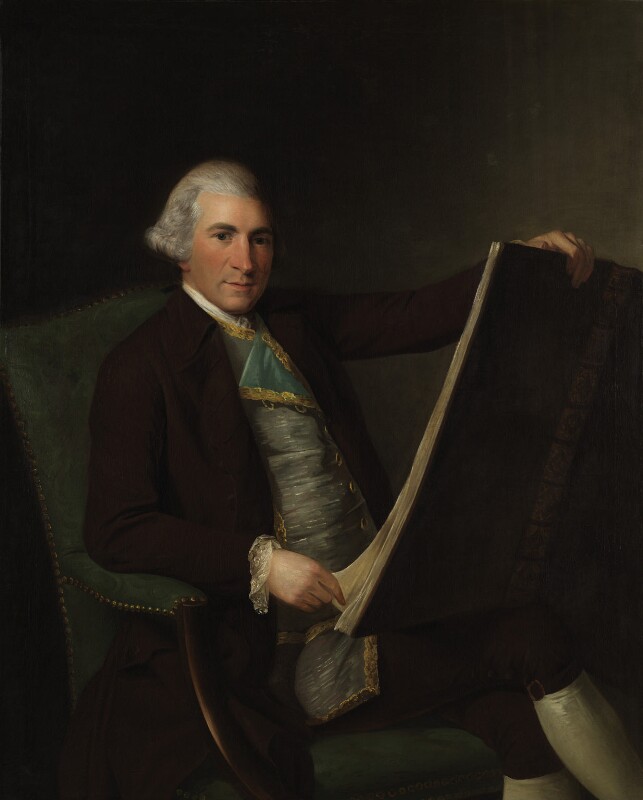 Although Adam was for a time the most fashionable architect in London, and by no means averse to self-advertisement, his portraiture presents a meagre study. Contemporary references are confined to portraits painted in Rome in 1756 by Allan Ramsay and Laurent Pêcheux, of which the first is untraced. When, after his death, James Tassie was commissioned to produce a medallion, he could find as a guide only the death mask taken by Nollekens (untraced) but, while the Adam family considered the result to show 'something of the general air of the face', the features were considered 'not like'. [1] In 1821 two unattributed portraits were offered for sale by the family, one showing him 'earlier in life', conceivably the Pêcheux, [2] the other conceivably NPG 2953.
NPG 2953 is generally considered to be the only life-size portrait of Robert Adam in existence but, owing to a lack of documentation and comparative material, the identification cannot be proved absolutely, as Kerslake first emphasised. [3] It depends largely on the provenance but, as Tait has argued, Robert Adam's niece Susannah Clerk and Admiral Sir Charles Adam, the grandson of his brother John, must have known ‘either what he looked like or what his appearance was supposed to be’. [4] Lt. Cdr. Adam, writing in 1932, said the portrait had always been known at Blair Adam as Robert Adam [5] and the features sufficiently agree with those shown by Pêcheux and Tassie (but do not include the wart on the right cheek). There is at least a strong family likeness in the two portraits of James Adam, by Allan Ramsay c.1754 and the so-called Batoni dated 1763 (once thought to show Robert Adam). [6]
NPG 2953 lacks the quality of both these James Adam portraits; the drawing is hard, the elegance rather forced - and the safety of the folio volume is disregarded. Costume suggests a date of c.1770, but an attribution has proved contentious. Sold in 1926 as English School, it was subsequently attributed to Zoffany in 1936, to an unknown artist in 1948, to Willison in 1971 and to David Martin in 1989. Of these names Zoffany may be discounted and Martin’s work provides no completely persuasive comparison, [7] although his studio chair has been provisionally identified in NPG 2953. [8] The attribution to Willison, first suggested (verbally) by Robin Hutchison, is supported by comparison with Willison’s Archibald Douglas of 1769; [9] since Willison was in India 1774-78, a date before 1774 would be implied.
The anonymous folio volume may refer to Robert Adam’s Ruins of the Palace of Diocletian at Spalatro, published in 1764 [10] or, less likely, to the first volume of Robert and James Adam’s Works in Architecture, published in 1773. [11] But if either of these celebrated volumes was intended, it is odd that they were not identified.
A 20th-century copy is at Blair Adam.