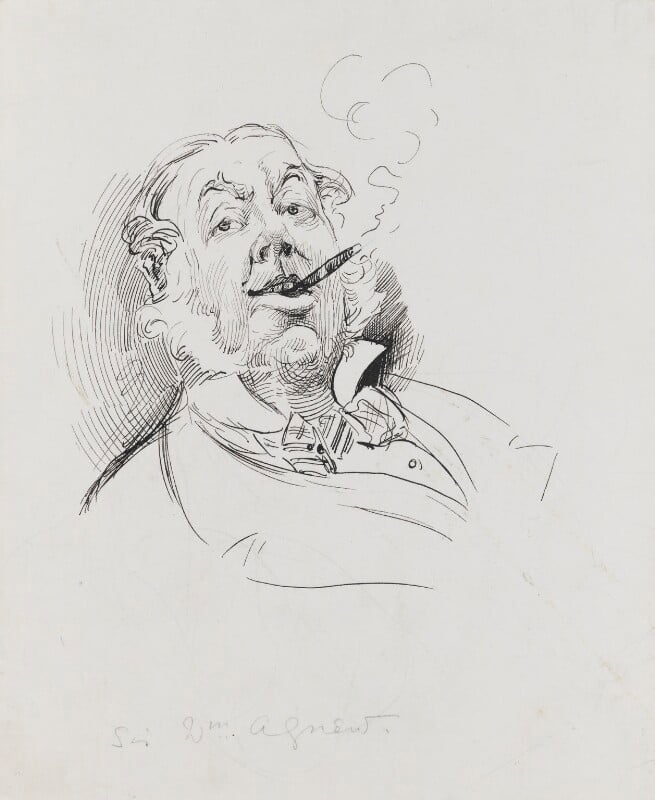 Sitter and artist probably met around 1880 when Furniss first contributed caricatures of MPs to Punch. These became the basis of his public slide show ‘The Humours of Parliament’, 180 images ‘satirically illustrative of all phases of parliamentary life’.[1] Another sketch by Furniss shows Agnew in his parliamentary role, lounging on a bench during a debate.[2]

Although Furniss referred to him as ‘my friend’,[3] as co-publisher of Punch Agnew was also his employer, a relationship that may have influenced this presentation of him as a genial old gentleman rather than a powerful business figure; Furniss’s depiction notably lacks the gravitas imparted by George Frederic Watts’s portrait, in point of comparison (see ‘All known portraits, before 1894’). The wreaths of cigar smoke in this drawing indicate a social occasion and may relate to a convivial Punch dinner, such as that recorded by Furniss in February 1883, when Agnew ‘waxed very loquacious’ on the subject of John Morley’s election to Parliament.[4]

Only the head and neck are worked up in ink, but pencil strokes extend the figure to waist length and indicate Agnew’s right sleeve. Despite the inscription on the reverse, the drawing does not appear in Furniss’s book The Two Pins Club (1925), nor is Agnew mentioned in the text.

Half-length to right, nearly full face, with sidewhiskers and cigar in mouth.