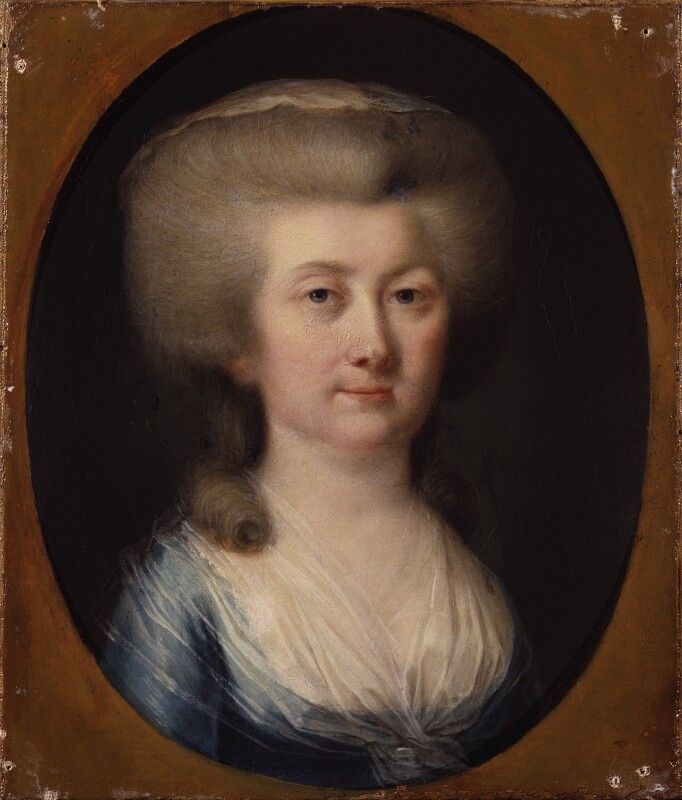 Inscribed on a label in the same hand as on NPG 376, removed to the picture dossier in 1873, reads: Duqueza d'Alban[i]l Pompeo Batoni Pinxet. DO/Espolio de S.M.J. a Snra. D. Carlota/Joaquina.

Although it entered the collection with Prince Charles (NPG 376, Charles, Prince) and Cardinal York (NPG 378, York, Cardinal) and remains associated with these two portraits, both rightly named, the identification of NPG 377 should be treated with caution. The label, which has proved incorrect as to attribution, remains the principal source but no other versions of the type are known and the features of the lady are not easily reconciled with authentic portraits of Louisa. The hair style and costume are of this date but the sitter looks distinctly old for c.1785.

Restored 1889; discoloured retouchings in the hair over left temple; some shrinkage (due to relining?) below right eye; slight losses in background; pin holes at corners.

Purchased, 1873, with NPG 376 and NPG 378 from R. Butterworth, a dealer; all were stated to have come from Monsieur Husson da Camera, formerly Minister of Portugal in Rome, then living (c.1873) at S. Benedetto, near Ancona; Stuart portraits, according to the vendor, formed part of the inheritance which fell to the Queen of Portugal as heiress of her father Charles IV of Spain (1748-1819). [1]

View all known portraits for Louisa, Countess of Albany