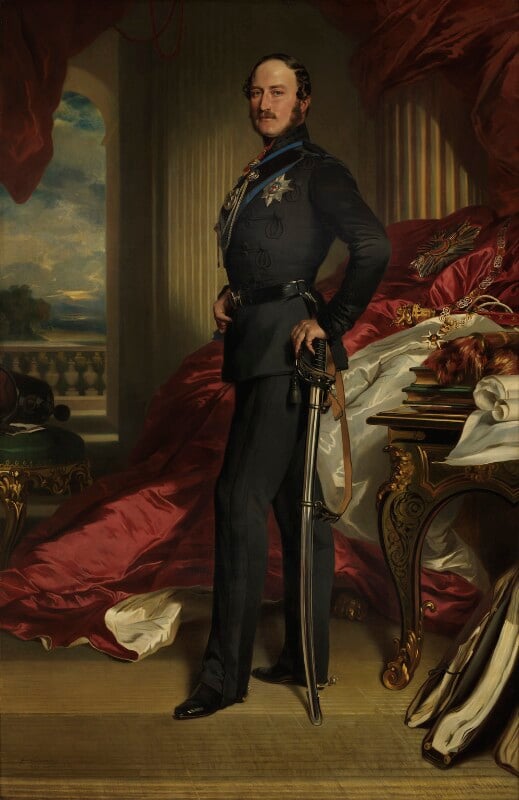 This is a full-size replica of Winterhalter's last portrait of Prince Albert, painted in 1859, and now in the Royal Collection; the latter was exhibited VE, 1892 (57), reproduced Marquis of Lorne, VRI: Her Life and Empire (1901), p 121, engraved by S. Bellin and lithographed by J. Vinter (examples in NPG). The Prince Consort is shown in the uniform of the Rifle Brigade, with the star and ribbon of the Garter; behind him are the robes of the Bath, and on the table the chain and star of the same order, with a field-marshal's baton.
Queen Victoria decided to commission the NPG replica after discreet enquiries from the NPG trustees, who were anxious to represent Prince Albert in the collection. In a letter of 6 July 1866, Queen Victoria's private secretary wrote (NPG archives): 'I have received the Queen's Commands to say that Mr Winterhalter has consented to produce a Replica of his last portrait of His Royal Highness'. He wrote again on 3 April 1867, forwarding the completed replica, 'and I am to signify that Her Majesty has great pleasure in presenting the Institution with a likeness, the accuracy and execution of which have given the Queen much satisfaction.'

Commissioned by Queen Victoria, and presented by her, 1867.