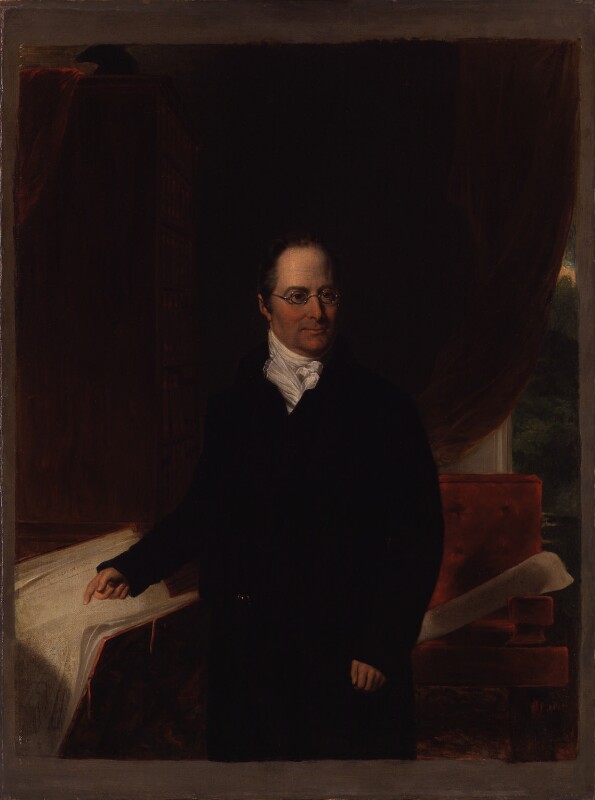 The identity of this portrait rests on the lighthouses and on a copy in the collection of the Port of London Authority (reproduced RIBA Journal, LVIII, November 1950, p 2). Both versions seem to have been painted c.1818-20 when the sitter was aged 50 and engaged on Lundy Lighthouse. Alexander's London Docks and Warehouses were built between 1796 and 1831 (Daniell's aquatint view of London Dock appeared in 1806), the Holyhead Lighthouse in 1808-9, Heligoland in 1811, and Lundy was finished in 1820 though the drawings were submitted to the PLA in 1818. The PLA copy is almost identical but without the LONDON DOCK inscription, without studs in the chair and unsigned. It was presented to the PLA by William Vaughan in 1845 together with a portrait of George Robinson, the first Secretary of the London Dock Company. The Robinson portrait is certainly by Partridge who repeats the curious trick of making the coat-sleeves too long. It was engraved by Henry Meyer in 1818 with Partridge's name. In view of the traditional attribution of the PLA copy (and of the Robinson portrait which is more characteristic) and of the initials J. P., there seems to be no reason to doubt the artist's name, though Partridge's usual style is rather less stilted than in the Alexander portraits. Unfortunately his sitter-books before 1827 are not in the NPG library.

Three-quarter-length standing to left, head turned to right, black suit, white lined cravat, small oval spectacles, pointing with his right hand to a red portfolio containing papers including A VIEW of the LONDON DOCKS; on a crimson leather chair is a paper inscribed: HOLYHEAD HELIGOLAND LUNDY/LIGHTS. Bookcase in left background, brown curtain behind and landscape right.

Early history unknown until Ian G. Appleby offered it to the NPG in 1967; Debenham Coe sale 10 November 1970 (54) catalogued as being by John Partridge signed and dated 1818, though this date is probably a misreading of Pinx; bought by Hugh Leggatt on behalf of the NPG 1970.