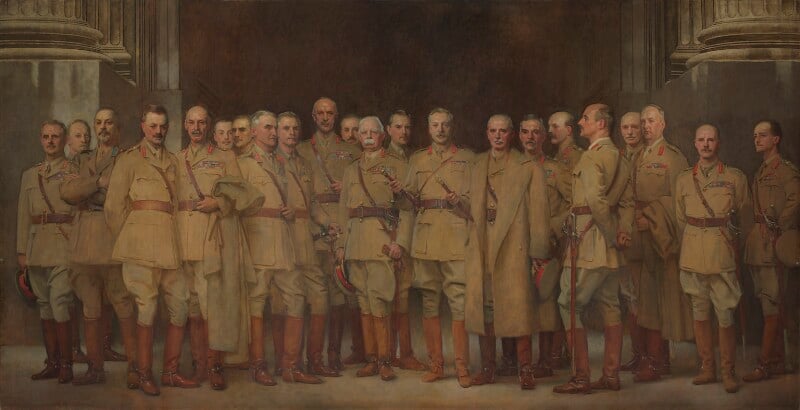 This work is one of three group portraits commissioned by the South African millionaire Sir Abraham ('Abe') Bailey and presented to the National Portrait Gallery, London. The works were conceived to commemorate the role of the army, the navy and politicians in bringing the First World War to a close and can still be found in the gallery today: General Officers of World War I by John Singer Sargent, Naval Officers of World War I by Sir Arthur Stockdale Cope and Statesmen of World War I by Sir James Guthrie. [1] Sargent was approached by the Trustees of the Gallery and asked if he would be willing to undertake one of these paintings, despite his well-known wish to retire from portraiture. The chairman of the Trustees, Lord Dillon, explained the circumstances of the commission in a letter to the artist on 17th December 1918:

'An offer has been made to have painted for presentation to the nation and as a gift to the National Portrait Gallery three groups of the most distinguished Naval Commanders, Military Commanders and Statesmen of the Empire as a commemoration of their services during the Great War. This offer the Trustees regard as the most important of its kind ever made to the Gallery and have, in its acceptance, waived their inflexible rule precluding the admission of portraits of living celebrities. The donor desires that three different artists should be invited to paint these groups and has left the nomination in the hands of our Trustees. As it is the unanimous opinion of our colleagues, the Trustees, that no artist is so pre-eminently qualified as yourself to ensure successful treatment of such a subject, we are requested to enquire on their behalf whether you would consent, notwithstanding your well-known reluctance to undertake further portrait painting, to reconsider your decision in this respect and render a national service by accepting their invitation to paint one of these groups. It is proposed that the naval and military groups should each contain about twenty and the statesmen's group about fifteen figures, portrayed without any head-dress so that their features may be fully revealed.' [2]
At first, Sargent was reluctant to accept the offer, replying to Lord Dillon a few days later expressing his sense of honour at being invited to complete the commission but also 'the greatest regret ... that I am so hampered by circumstances that I would not be justified in accepting a commission of this great and immediate importance.' [3] These 'circumstances' referred to the artist's existing work in America on the mural decorations of a public building for the Museum of Fine Arts, Boston, which would require him to spend the next two to three years overseas. After Lord Dillon wrote to Sargent again on the 30th December urging him to reconsider his decision, emphasising the historical importance of the group portraits and assuring him that '[t]he Trustees would be only too desirous of leaving you an absolutely free hand and choice, unfettered by any condition', Evan Charteris intervened. [4] Charteris, a Trustee but also a close friend and biographer of Sargent himself, wrote to both James Milner, the director of the gallery, and to Lord Dillon expressing his belief that Sargent might indeed be persuaded to consent. He thought that if Sargent were given the military picture without the pressure of time, the reassurance that he could fit the work in with his other commitments and receive some administrative help with the arrangements for the sittings, they could reach an agreement. [5] Charteris also indicated that the payment to the artist would be 'not less than £5,000' (perhaps £125,000 today). [6] Sargent finally succumbed to the pressure and accepted the commission in letters to Lord Dillon in early January 1919. He also wrote to Charteris confirming this decision: 'Yes, I have written to Lord Dillon and said that if the Trustees should ask me again, leaving me liberty of time, I would gladly do the Army group - gladly is polite.' [7] Although Sargent seemed to regard the commission as merely a duty and a chore, writing to Charteris on 12th May 1920 that '[t]he Generals loom before me like a nightmare ... I curse God and man for having weakly said I would do them, for I have no ideas about it and I foresee a horrible failure' [8], he threw himself into the task with his usual energy. [9]
A list of the officers to be painted was drawn up by Evan Charteris and Viscount Harcourt, another Trustee, and revised by Sir Abe Bailey. It initially comprised twenty-five names but Bailey rejected three of the sitters (General Ian Hamilton, whose role as commander-in-chief at Gallipoli associated him with military failure, Sir Jacob Louis van Deventer and Hugh Montague Trenchard), and added one (Sir Henry Lukin). [10] At a later stage, Sir Charles Munro and Sir Hubert Gough were also dropped. [11] This brought the final count to twenty-two.
Sargent contacted sitters through Milner and was able to begin preliminary work on the painting before returning to America to continue his murals in May 1919. He wrote to Milner on 8th September 1920: 'I have had sittings from four Generals already and have made appointments for several more. Before going away last year I got a sitting from Gen. Monash and Gen. Smuts.' [12] He started to work consistently on the painting when he returned to England in July 1920. In August of this year he wrote to Milner to inform him of his return, to ask whether the list of sitters was final, and to request details of the current military rank of each of the generals to save him from any mistakes whilst communicating with them. [13]
He apparently enjoyed painting the individual studies of the sitters, but was worried by the prospect and consequences of bringing the sitters together in one group, writing to a Mrs Gardner in September 1920: 'My generals are beginning to congregate, and I am making sketches and studies of them separately. Each is interesting in himself, but united we will fall.' [14] He also expressed this concern about the composition and setting to fellow artist Sir James Guthrie (painter of the 'Statesmen' picture):

'I have been back a couple of months and thanks to Mr Milner have put salt on the tails of a certain number of generals and I find each one of them individually very interesting to do and the tremendous variety of types seems to give a promise of some sort of interest. But I am still merely collecting material and have not yet evolved any scheme of the picture as a whole. I am handicapped by the idea that they never could have been altogether in any particular place - so I feel debarred from any sort of interesting background and reduced to painting them all standing up in a vacuum.' [15]
It is difficult to securely establish from surviving correspondence the dates and chronology of individual sittings but individual oil studies for a number of the generals were painted between 1919 and 1921. [16] Sargent also completed pencil studies of many of the figures, frequently annotating the works with the sitter's height and occasionally with additional notes, showing his attempt to work out the sitters' relative poses. [17] Oil studies of most of the generals survive in various collections and 17 of the drawings can be found in the National Portrait Gallery.
From January to October 1921 Sargent was working again in America. Although he attempted to complete the generals group in good time on his return to London, he was hampered by the poor winter light and persistent fogs: 'These dark days have retarded the progress of the picture ...' [18] Sargent encountered additional difficulties when he was unable to paint some of the sitters from life. For instance, he was forced to work from a newspaper cutting to achieve a likeness of Sir Andrew Russell, who was suffering from flu and about to sail to New Zealand when a sitting was requested. According to a letter from Russell, this is the reason his portrait is tucked in behind the other generals. [19] In addition to this, both General Maude and General Botha had died before Sargent began work on the painting. It is not known how Sargent went about painting Maude's posthumous portrait for the group, but for Botha he had recourse to Guthrie's head and shoulder oil study for the figure of Botha in the Statesmen portrait. [20] Sargent wrote to Milner: 'Evan Charteris has given me the photograph of Guthrie's head of Botha which is very fine ... The attitude of the head and the lighting are both totally different from mine - but I hope to get something out of it.' [21]
Unlike Cope and Guthrie, who arranged the figures in their portraits (the Admirals and Statesmen respectively) naturalistically and animatedly with the figures appearing at times to be in conversation with one another, Sargent decided not to introduce a similar narrative motif. [22] This is a fictitious grouping composed in the artist's studio and appears as such.
The generals are posed in an unbroken line, with their heads all on a relatively similar level, against a neutral, architectural background. This background, with its inclusion of large classical plinths and fluted columns, is almost certainly an invention of the artist. The Generals themselves are all uniformly shown in khaki service dress, with the Field Marshals carrying their batons and all shown with swords and wearing spurs. According to Ormond, the picture could be described as monotonous or unenterprising in terms of realistic composition, but realism is not a primary consideration for the artist. As a statement about military leadership, the picture is perhaps very effective. The generals appear like a set of puppets waiting for someone to pull the strings, or, as Charteris described them, like a chorus about to advance to the footlights. As would be expected, any unsuccessful officers are absent from the painting. The pecking order of those included is generally clear. At the centre are the two Commanders in Chief on the Western Front, John French on the right and his successor, Douglas Haig, on the left. On the right of the picture are the Army Commanders of the Western Front, with the addition of the tall figure of Sir Henry Wilson, who never actually achieved High Command in the field and instead conspired against those who did. He was eventually made Chief of the Imperial General Staff (CIGS) and so should actually be standing slightly behind and to the left of Haig because his predecessor as CIGS, Wully Robertson, is standing just behind French. To do so though, would have been to place him dead centre of the picture, where his height would have enabled him to dominate the whole, perhaps as he would have wished but also as his colleagues would have hated. [23]
The painting was eventually completed in 1922 and was exhibited at the Royal Academy in that year before moving to the National Portrait Gallery. At the exhibition, the portrait met with moderate acclaim, but Sargent's own reservations about the work were echoed by some of the critics. A. Clutton Brock wrote:

'Mr Sargent has merely given us a number of portraits in one frame; and we cannot but feel that these generals never were so gathered together, that they ought to be divided from each other and framed separately. There are, of course, heads finely painted; and the great fluted pillars at the side, with their bases, are impressive; the artist seems to have been more interested in them than in his generals; but the red tabs and the ribbons and the two batons seem to have troubled him; they are mere specks in the picture and not a means of pulling it together. It is, of course, an interesting collection of paintings, free from all vulgarity and pretence; but it is, unfortunately, not a picture.' [24]