9 of 122 portraits of Sir Henry Irving 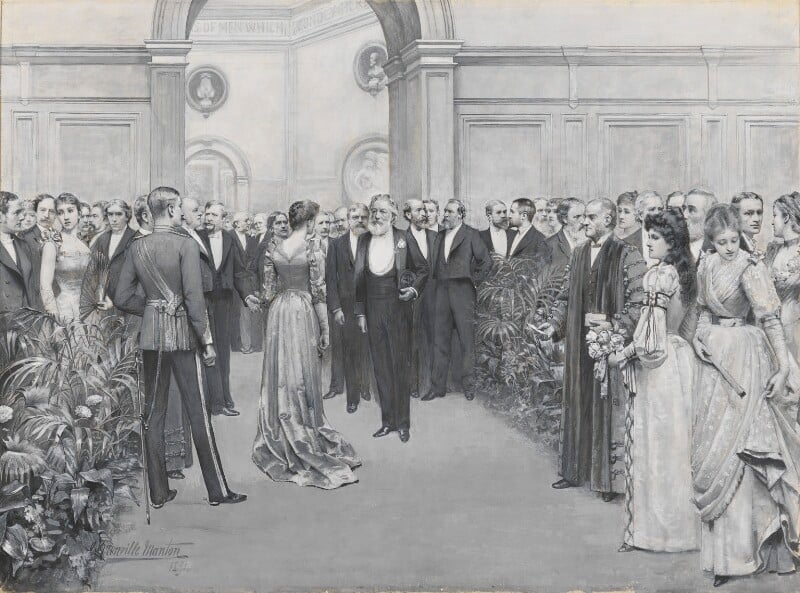 G. Grenville Manton (1855-1932) was a portrait painter and illustrator; he was a staff artist on the illustrated magazine Black & White from the 1890s. [1] This is a large watercolour drawing for a double-spread engraving in the publication, dated 27 June 1891 and entitled The Royal Academy Conversazione - The President and Council Receiving the Guests. [2]

From the foundation of the Royal Academy in 1768, it had been the custom to hold an annual dinner to mark the birthday of the Sovereign. In 1851 this was abolished in favour of the yearly ‘soirée’, which allowed the participation of a greater number of guests, at a more economical rate per head. [3] The loss of the former tradition was not an entirely popular alteration. In his parody of the institution written in 1890, Harry Furniss records his perspective of the event:

Watch the crowd, as I have, going down, anticipating refreshments worthy of their host, the Royal Academy of England! And watch them coming up! the victims of bitter disappointment … exasperated with the niggardly provision made for the guests and hungry and affronted. The only way to make an Englishman pleased is to satisfy his stomach … I firmly believe this refreshment antic of the Royal Academy does more to injure the reputation of that mean society than any starving of Art in the eyes of the great British public. [4]

In contrast, the text accompanying the published engraving in Black & White describes a more elegant and orderly spectacle, which in 1891 took place on Wednesday 24 June:

A continuous stream of carriages block the way of Piccadilly for hours, depositing the occupants at the door of Burlington House. Up the broad flower-lined stairway flocks the cream of London’s fashion and beauty – and the Art, Literature and Science, the Services and the Law, Connoisseurship and the Aristocracy, all are worthily represented in this great annual Academy festival … the crowded rooms afford plenty of amusement in the meeting of one’s friends, in listening to the fine military band in the sculpture room, and, for many, in looking out for ‘who’s who’, or in the refreshment room downstairs. And so the brilliant throng passed the pleasant hours, and not until midnight has sounded does the rumble of the last carriage awaken the echoes of Piccadilly, and the tired porter swings to the massive gates that close in the sacred precincts of Burlington House. [5]

Manton effectively captures the grandeur and formality of this event and provides a fitting illustration to the accompanying text:

At the vestibule the guests are announced by the gorgeously-attired porters to the President, who, surrounded by his Council, receives them with the graciousness and amiable courtesy for which he is renowned: with a smile and a handshake for his friends, or a dignified bow for those outside his immediate circle of acquaintanceship. It is a favourite custom of guests who have already passed the President to stand behind the banks of flowers and watch the charming way in which Sir Frederic Leighton discharges his tedious function. [6]

Indeed, there is a narrative element to the artist’s composition: on the right-hand side, guests wait to be announced beside one of the two porters, who will call their name from a card, presumably provided by them upon arrival at the head of the queue. In the centre of the composition Frederic Leighton – president of the institution since 1878 – is solemnly engaged in this ritual, the couple before him poised at the moment of greeting after advancing towards him from their place in the line. Amongst the watching figures grouped behind the foliage are portraits of the leading artistic figures of the day, the majority of whom were Royal Academicians.

The image includes thirty-eight heads. Twenty-three were identified in the published caption in 1891; in 1936 Marion Harry Spielmann listed twenty-eight names. [7] In 2004 the NPG Complete Illustrated Catalogue confirmed twenty-six identifications, and this figure has now been expanded to twenty-seven, with the inclusion of John Calcott Horsley. This artist was a prominent member of the Academy and likely to be present at such an event; he can be partly seen behind the left shoulder of the Hall Porter to the right-hand side of the room, and in front of Mary Anderson. [8]

Four full-length figures in the foreground remain unidentified, which is surprising, considering the prominence of their position and their size within the composition. The two individuals engaged in greeting Leighton have their backs to the viewer so that their features are obscured. They are perhaps more representative of a type, the typical attendees of the soirée. In contrast, the features of the two young women standing at the front of the queue – one with a mass of dark hair and the other holding a fan – are so detailed and distinct that they were undoubtedly intended as specific likenesses. Between the heads of the two women is Henry Tanworth Wells. It is possible that these figures are his two daughters, and that he is standing beside them in line, waiting to introduce them to the president. Alice Joanna Street and Joanna Margaret Hadley would have been in their early thirties in 1891. [9] Moreover, the woman holding the fan bears a strong resemblance to Alice, who was represented next to her father by Henry Jamyn Brooks in his group portrait, Private View at the Old Master’s Exhibition, 1888 (NPG 1833). The same delicate nose, distinctive eyebrows and rounded chin, are evident in each depiction.

NPG 2820 is the only work by Manton in the collection at the National Portrait Gallery. It was purchased from M.H. Spielmann in 1936, when he initially attempted to sell his entire collection of about eighty portrait drawings of artists to the Gallery. In 1935, Henry Hake – director from 1927 to 1951 – visited his home in Folkstone, Kent to view and discuss the works. [10] Ultimately, the Gallery acquired eleven drawings for the sum of £100. [11] Spielmann was an important art and literary critic. He wrote for numerous publications including the Pall Mall Gazette, and was editor of the Magazine of Art from 1886 to 1904. He was also a friend of many leading artists of the late nineteenth and early twentieth centuries. In a letter to Hake detailing the sitters identified by him in Manton’s watercolour, Spielmann explains: ‘As to the list – all of them except four were friends of mine – and now all are gone! – except the modest survivor.’ [12] Before the drawing was engraved on wood for publication Spielmann, whose portrait was included by the artist without his prior knowledge, requested that the likeness be changed to represent the actor and theatre manager Sir John Hare. [13]

Like Brooks before him, Manton ambitiously tackled the problem of including multiple group portraits within a single composition, whilst presenting the illusion that the scene was observed in its entirety rather than constructed in a piecemeal fashion. Unfortunately, there is little documentary evidence to describe the artist’s working process. Considering the small scale of the image and its essentially descriptive purpose in a prominent publication, it is likely that Manton relied on photographic likenesses to represent each sitter as an alternative to live sittings. The head of John Pettie for example, between Briton Riviere and Lawrence Alma-Tadema, bears resemblance to a photograph of the artist published in 1888 in The Year’s Art, [14] a publication that would have been easily accessible to Manton. It was published annually and included numerous photographic portraits of RAs and ARAs. Even the angle of the head, inclined slightly to the left, is the same. In another example, the profile pose of John Seymour Lucas, to the extreme left, is almost identical to the familiar Van der Weyde photograph of the 1880s. This image was also published in The Year’s Art in 1899, and as wood-engravings in the Graphic and the Art Journal, in 1886 and 1887 respectively. [15]

Half length,slightly to left, facing, hair greying and parted at centre

Marion Harry Spielmann, from whom purchased in 1936.