10 of 2370 portraits matching these criteria: 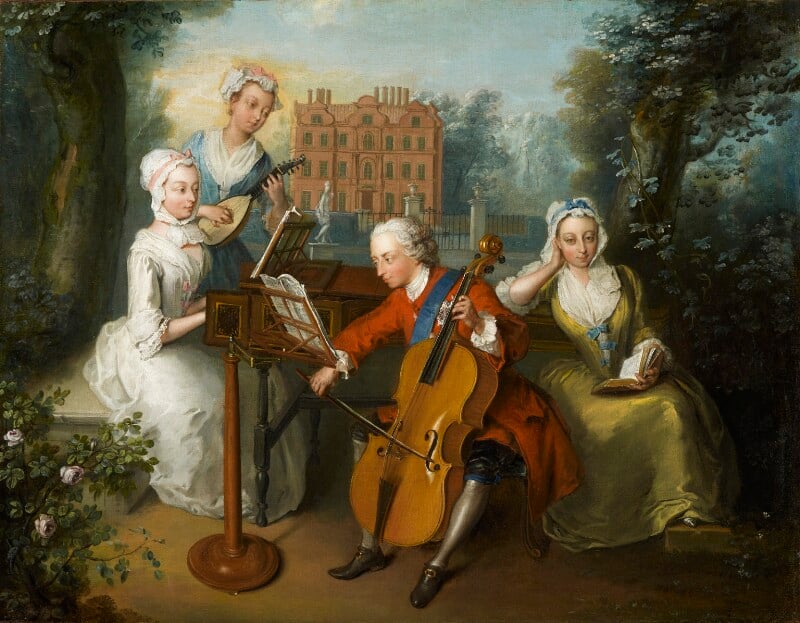 Signed and dated bottom right: Ph. Mercier fecit/1733.
An old manuscript label on the stretcher reads: Prince of [? Wales]/Frederick Lewis & his 3 Sisters/Grandfather to his present Majesty 1733/Ph Mercier/portrait painter to H.R.H. George 2nd [struck through from the 'H' of H.R.H.]

Two other versions of this painting survive. One at Windsor, in better condition, is not signed or dated (Sir Oliver Millar, The Tudor Stuart and Early Georgian Pictures in the collection of Her Majesty The Queen, 1963, 522). The same figures are set in the Banqueting House at Hampton Court; on the walls are two gilt mirrors, probably among those supplied in 1733 by Benjamin Goodison. Removed to Windsor in 1829, it was at Kensington in 1818 and is recorded in store in the Pall Mall Apartments in 1767 as ‘... His late Royal Highness Prince of Wales, & 3 Sisters in a Concerto'. [1] Another version, approximately the same size as the Windsor picture, has a background identical with NPG 1556, showing the Dutch House, Kew, and is at Frederick's one-time residence, Cliveden. [2] The position of the sitters and their activities are the same in all three pictures. This leads to the supposition that NPG 1556 may have been nearly identical in size. Two related drawings in the library at Windsor, which bear the initials of Thomas Worlidge, show a slightly different pose for the Prince, while Anne is drawing at a table. [3] Previously accepted as altered copies by Oppé and Edwards, these might conceivably record a lost variant design. Another drawing in the British Museum, depicting a terrace concert with the musicians grouped similarly, is attributed to Mercier. [4]
While it is reasonable to suppose that on apparent age the Prince's three elder sisters are represented, [5] and indeed they are so named (but not identified) in the Shotover sale, 1855 (see Provenance), there is no firm evidence for saying which sitter is which. The grounds for identifying the Windsor drawing as Anne are not apparent; there is no contemporary inscription. Anne seems to have been identified on the strength of Egmont's comment on her prowess on the harpsichord. Worlidge's drawing, for what it is worth, shows a different activity - sketching. It would be relevant to ascertain, if possible, the musical accomplishments of the other sisters, and the significance of the volume of Milton. In the absence of such information, it seems a little fanciful to attribute particular accomplishments exclusively to specific individuals.
The present identifications seem to date only from Edwards' article. Drawing and the harpsichord were common eighteenth-century accomplishments. In the absence of evidence to the contrary, it is at least arguable, as suggested by John Ingamells, that in view of the well-known antipathy between the Prince and the Princess Royal at this date, Anne may be the figure, previously called Amelia, who holds the book, somewhat apart from the others, her hand almost covering her ear.
The circumstances surrounding the creation of three versions are unknown. Presumably the subject was commissioned by Frederick who employed Mercier, 1729-36. The Windsor portrait, in store in Pall Mall in 1767, might well have come from nearby Norfolk House, home of Frederick's widow, and thus may be the version ordered by the Prince. Any explanation must take into account the Prince's bad relations with his sisters, especially Princess Anne, with whom, according to Egmont, a more impartial observer than Hervey, he had not been on speaking terms almost throughout 1733. [6] If the type were just prior to 1733 some of these difficulties might be avoided. Princess Anne's home prior to her marriage in 1734 was the Dutch House at Kew. Mercier taught her painting, and a version might have been made for her. [7] Because of its ownership by the Schütz family (see Provenance), the Cliveden version may have been painted for Johann Schütz, brother of Augustus Schütz and Master of the Robes to Frederick from November 1734, who may have introduced Mercier to Frederick. [8]
Frederick learned to play the bass-viol in 1732-33, [9] but another source has the cello [10] (here clearly depicted), he must have advanced sufficiently to cope with an independent part in chamber music. He is not playing a solo but is perhaps amplifying the bass of the harpsichord with figuring. 'Concerto' in reference to this group is not to be confused with modern usage. At this date it implies simply a work for several instruments, and is best rendered by the term 'chamber music'. Egmont reports both Frederick's enthusiasm for the bass-viol and Anne's competence at the harpsichord.

Some retouchings, but difficult to assess as the varnish is very discoloured; perhaps once a picture of about 30 x 22 in., and cut down.

Bought 1909 from Sabin, previous history unknown. The assumption that NPG 1556 is the Shotover sale picture, first made by Edwards [1] and followed in the 1969 Mercier exhibition catalogue, needs revision. Ingamells has shown that the Shotover version, sold 26 October 1855, lot 632, was owned by Biscoe and is thus the Cliveden picture. [2]