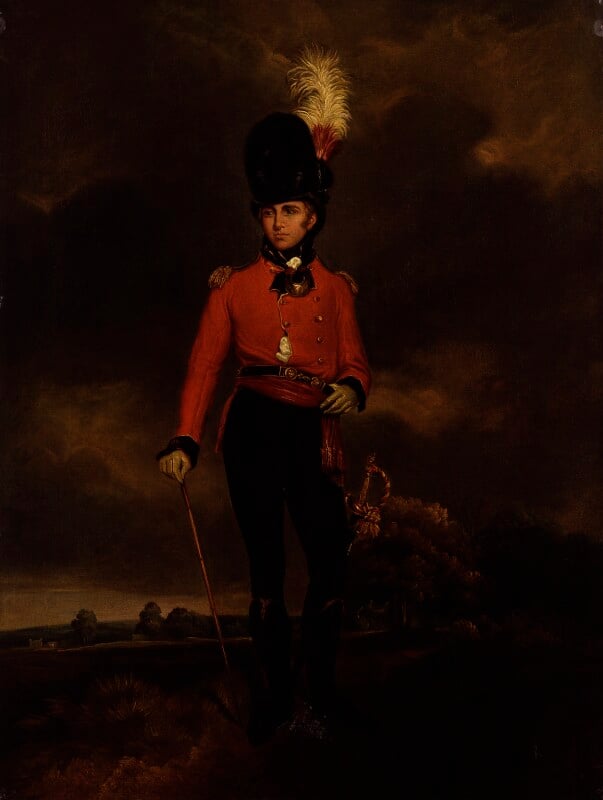 NPG 1546 is a small copy of a full-sized whole-length by A. W. Devis showing Amherst in the uniform of the St James's Volunteers of which he was gazetted Colonel 31 May 1798. According to Dunkarton's mezzotint the original was painted in 1803 for the St James's Loyal Volunteer Regiment 'pursuant to a Resolution passed at a General Meeting the 9th of December 1802'. The St James's Loyal Volunteers were raised in June 1797 to assist the Civil Powers in case of riot or invasion. Lord Amherst was their Colonel and the Colours were presented by the Duchess of York in July 1798. They were disbanded after the Peace of Amiens and revived in June 1803 as the St James's Westminster Volunteers with Amherst still as Colonel. Devis's original portrait, commissioned by the Regiment during the peace negotiations, was acquired by Lord Amherst after the War, lent by his descendant to the War Office in 1926, sold at Sotheby's (Amherst sale) 29 January 1964 (6) and again at Christie's 23 November 1973 (28), the buyer wishing to remain anonymous. The NPG copy, probably contemporary, is an anaemic affair compared to the swarthy swashbuckler of the original.

Family possession and descending to his granddaughter, Mary Sarah, who married the 2nd Earl Egerton in 1857; bequeathed to the NPG by Lord Egerton in 1909 - '... my Picture of the 1st Earl Amherst in the uniform of the Westminster Volunteers' (from Lord Egerton's will 1909).

(of the original)
Mezzotint by R. Dunkarton published 12 September 1805.