7 of 1569 portraits matching these criteria: 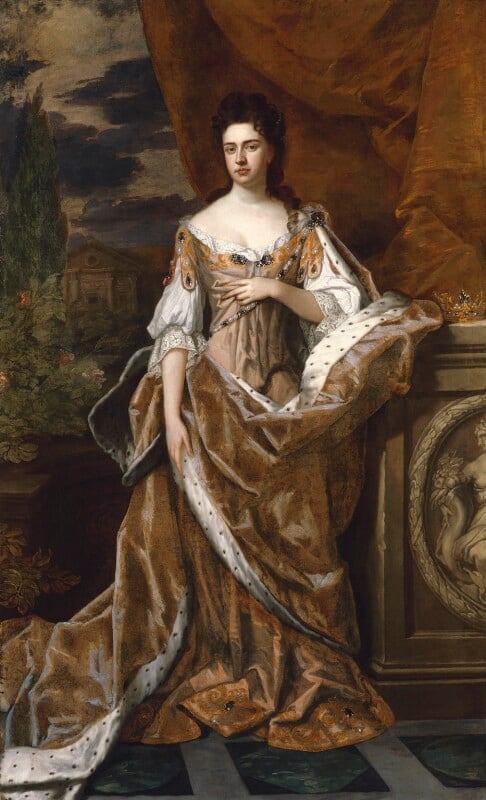 1 Recorded by D. Piper, Catalogue of the Seventeenth Century Portraits in the National Portrait Gallery 1625-1714, 1963, p 7. A second more recent inscription was recorded on 10 July 1911 by the restorer F. Haines: Sir Godfrey Kneller./Portrait.of.Queen Anne/age.34.ans - apparently derived from the much older French inscription.

Sold in 1911 as by Kneller, emphatically attributed to Dahl by Collins Baker, but again given to Kneller by Stewart in 1983. [1] The composition closely follows Kneller’s Lady Wentworth engraved by R. Williams c.1685, [2] and the head much resembles that of his 1689 Blenheim whole-length of Queen Anne. The elaborate plinth bears a figure of Ceres. [3]
A copy made in 1982 is in the Royal Free School, Windsor.

1) Who also suggested comparisons with Kneller’s portraits of Lady Dorset and Lady Middleton in the Royal Collection (O. Millar, The Tudor, Stuart and Early Georgian Pictures in the Collection of Her Majesty The Queen, 1963, nos.154, 158), see Old Master Drawings, XI, 1973, p 44n10.
2) See J. D. Stewart, Godfrey Kneller, 1983, p 160, pl.82h.
3) Interpreted by Stewart as emblematic of Abundance, Good Government and Public Felicity; the distant temple he suggests is a reference to the Princess’s strong allegiance to the Church of England (J. D. Stewart, ‘Pin-ups or Virtues? The Concept of the ‘Beauties’ in Late Stuart Portraiture’, English Portraits of the Seventeenth and Eighteenth Centuries, William Andrews Clark Memorial Library, Los Angeles, 1974, pp 24-25 n30).