54 of 3330 portraits matching these criteria: 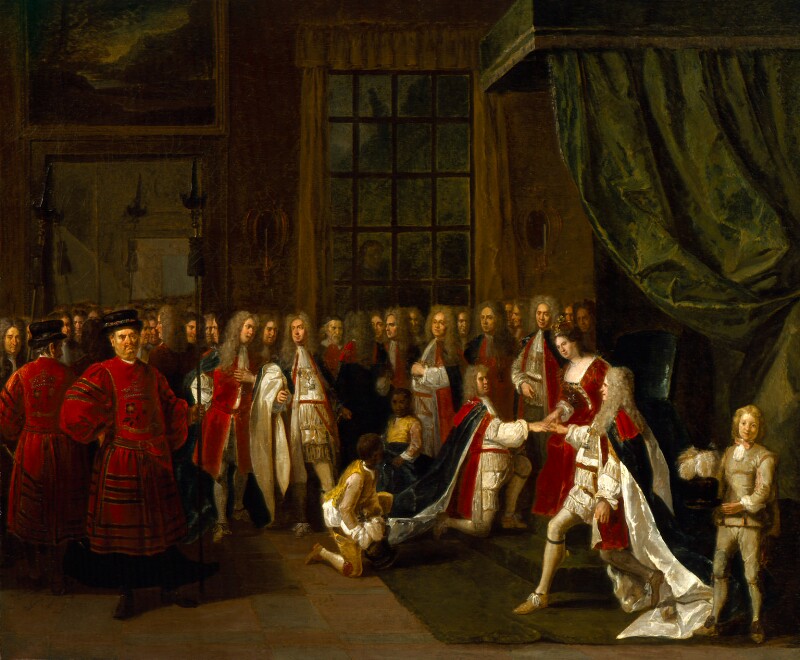 NPG 624 may show the installation of a Knight of the Garter, probably at Kensington Palace. [1] The heads are very generalised. [2] Angelis had arrived in London in 1712 and between then and the Queen’s death in 1714 there was a single installation ceremony, on 4 August 1713 at Kensington Palace [3] (rather than Windsor, due to the Queen’s poor health).
Robert Raines first suggested [4] that the subject was intended to be part of a general history of Queen Anne, painted retrospectively and specifically for engraving. The prominence of the foreground page and Yeomen of the Guard, and the curious, outsized, head looking in through the far window, encourage the supposition. NPG 624 is the same size and is stylistically allied to the three interior scenes Angelis painted c.1722 as part of a History of Charles I - a series of paintings by French and Flemish painters engraved in 1727-28 (the first painted and engraved historical sequence to be made in England). [5] But the Anne sequence, if such was intended, appears not to have progressed; her life lacked the drama and anecdote of Charles’s.