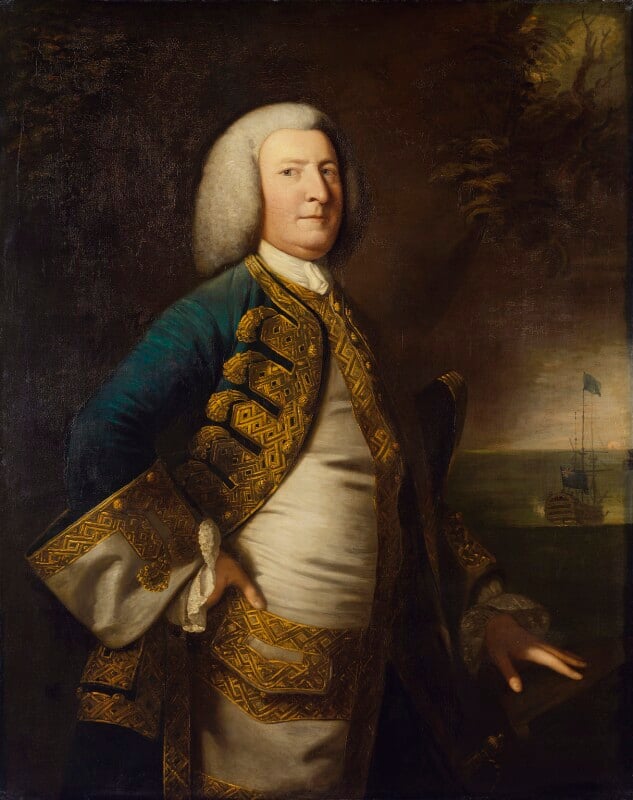 NPG 518 was received via the British Museum as a copy after Reynolds from a picture at Wimpole. Although it follows his design, Reynolds' hand is nowhere apparent, and the canvas may not be quite contemporary. It is first documented in 1810 (see Provenance). Records of Wimpole are not extensive and indicate only one portrait in 1798, listed by Musgrave next to a portrait of the sitter's wife, eldest daughter of the 1st Earl of Hardwicke. [1] In neither case is an artist named. A portrait by Hoare was sold from the house in 1924 and verified in the sale room as signed and dated 1753.
The original of NPG 518, according to Waterhouse, was painted mainly in 1754 with further sittings on 21 and 23 February 1755, and apparently finished that June. [2] It seems to have been painted for, or presented to, Admiral Sir Peircy Brett, lieutenant of the 'Centurion' at Payta, great-grandfather of Sir George Bowyer from whose sale, Christie's, 6 May 1871, lot 122, it was purchased by the Earl of Lichfield. It would thus never have gone to Wimpole. Graves and Cronin note a portrait in the collection of Sir William Reynell Anson, Bart, and two others of Anson and Saunders which were burnt at Flixton Hall, collection Sir Shafto Adair, 12 December 1846. Sir Charles Saunders (1713?-75) paid Reynolds for 'Lord Ansons Picture' a second payment, in November 1764. [3] Another version of NPG 518 is in the Museum of Fine Arts, Boston. [4]

Pale blue eyes, pale complexion, double chin, white wig; white lace cuffs, white neck-tie tucked inside waistcoat, flag officer's full dress uniform of 1748-67, hat under his left arm, the hand resting on what appears to be a stone ledge; [1] two ships at anchor, the nearer flying a blue flag at the main mast and a blue ensign at the stern, sun dipping behind the horizon; lit from top left.

1) Not clearly realised; in McArdell's engraving, the fluke of an anchor.

Transferred, 1879, from the British Museum to whom presented 12 March 1814 by the 3rd Earl of Hardwicke, a trustee from 1802, and presumably previously there on loan; Planta's catalogue of Montagu House records a portrait of Anson in 1810. [1]