1 of 4 portraits of Christopher Anstey 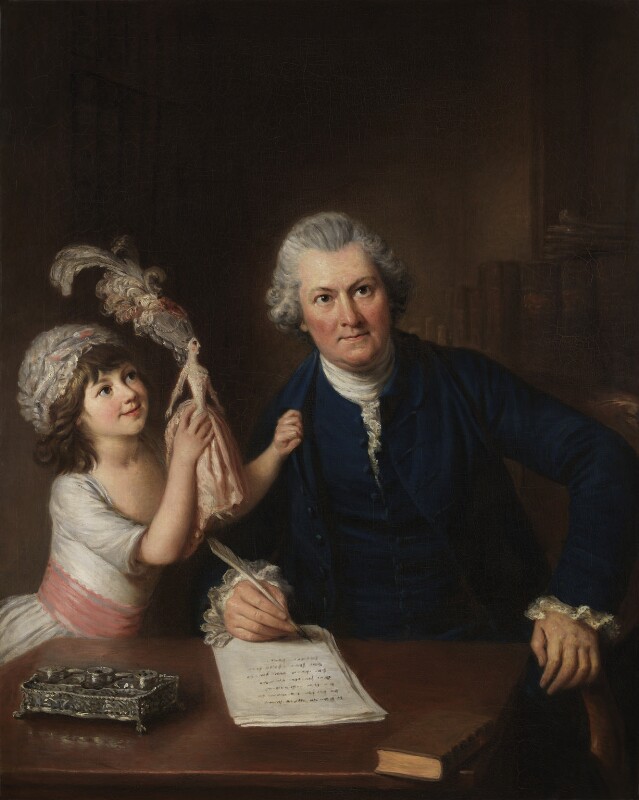 The little girl tries to distract Anstey from his verse composition with a fashionably-dressed doll, whose excessive hair style recalls his own New Bath Guide of 1766 (letter XII):

'Those tresses, which Venus might take as a favour,
Fall a victim at once to an outlandish shaver;
When lo! on a sudden, a monster appears,
A horrible monster, to cover her ears;-.' [1]

A version of the composition, with the child omitted, was engraved in 1807 for Anstey’s Poetical Works [2] as from a drawing by Lawrence, the plate giving Anstey’s age as fifty two, i.e. c.1776. The composition, and even the girl’s head-dress, resembles Wright of Derby’s Rev Thomas Wilson and Miss Macaulay painted in Bath c.1776. [3] Hoare made a bust-length etching of Anstey in 1778-79. Such evidence suggests NPG 3084 dates from soon after 1776; it may well have been the portrait of A gentleman and his daughter half lengths exhibited by Hoare in 1779. Such dating implies that the little girl is one of Anstey’s younger daughters. [4]
In 1913, when NPG 3084 had acquired attributions to both Gainsborough [5] and Lawrence, [6] Horace Buttery suggested it was by Hoare, [7] an attribution subsequently supported by the discovery of an early-nineteenth-century label on the frame. The head from NPG 3084 appears to have been copied in the portrait attributed to Simmons in the Victoria Art Gallery, Bath (c.1780).

Brown eyes, grey powdered hair, wearing a white neckcloth, blue suit, writing (deliberately illegible) verse; the girl has brown eyes and wears a white dress with a pink sash, and a cap of ruched silk gauze; in her hand a doll with a fantastic head-dress and pink dress.

This Portrait of my honoured father by Hoar of Bath is given by the wish of my eldest Brother, the late Revd. Christopher Anstey [1755-1827] to myself for Life, after my death to my Brother Thomas Anstey [c.1770-1843] for life and after his death to our nephew Christopher John Anstey absolutely./A. A. Calvert;1 the Rev John Filmer Anstey, thence by descent to the sitter’s great-great-grand-daughter, Caroline Mary Anstey, Mrs Samsbourne-Palmer, by whom bequeathed 1940.