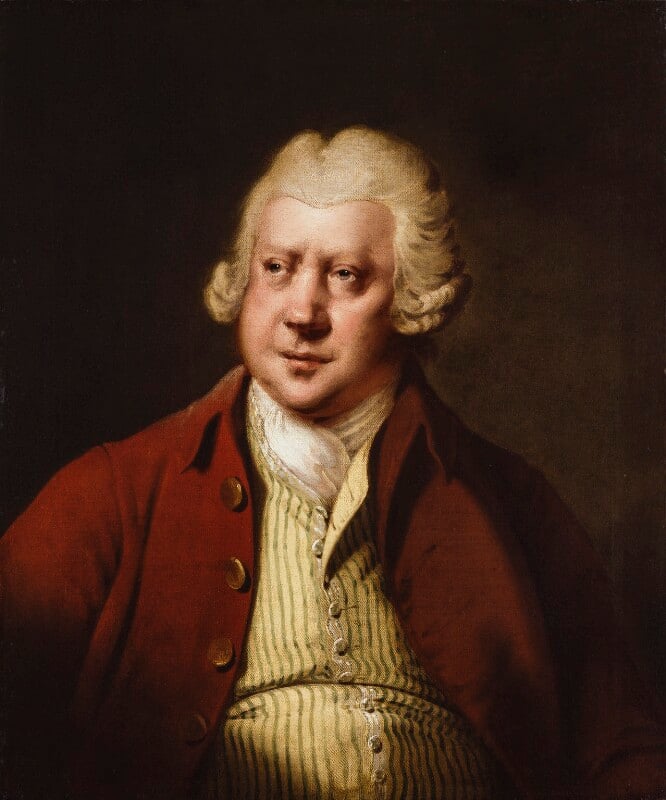 NPG 136 derives from Wright’s remarkable whole-length portrait painted in 1789-90 (in the collection of the sitter's descendants), [1] in which Arkwright’s huge figure is seated by a table bearing a set of rollers for the spinning of cotton, the source of his prosperity and perhaps of his own invention, his stern expression and clenched left hand suggesting the ‘Tyrant ... more absolute than a Bashaw’ described by Boulton. [2]
Wright's undated accounts record 'a full length of Sir R Arkwright £52.12.0' and 'a 3qrs [i.e. 30 x 25 in.] copy of Sir R Arkwright £12.12.0', [3] the latter very probably the half length painted for Jedediah Strutt, now in the Science Museum, London, which Nicolson described as 'the only [half length] that has strong claims to be an original’. [4] NPG 136 is one of three other half lengths which appear to be at least from Wright’s studio, the other two being with the sitter's descendants and in the Helmshore Textile Museum. [5] The abraded surface of NPG 136 complicates assessment, although Nicolson considered it to be ‘also excellent’ and Egerton considered it a replica. It was listed as a studio production in 1981 [6] and the provenance suggests a studio replica commissioned for a friend.
Half-length copies are in Manchester City Art Gallery (1968.239) and the Castle Museum and Art Gallery, Nottingham (1887-5); [7] an oval copy was sold Sotheby’s, 12 February 1998, lot 220, and a small pastel copy of the whole length, attributed to J. R. Smith, was with Sabin in 1964. [8]

Said to have been given by the sitter to Erasmus Darwin;1 his daughter-in-law Lady Darwin, from whom purchased 1861.

1 Lady Darwin [Jane Harriot, widow of Sir Francis Secheverel Darwin, Kt] to Scharf, 15 November 1861 (NPG archives): ‘This portrait of Sir Richard Arkwright (by Wright of Derby) was presented by him to Dr Darwin in addition to a fee of £1000 in compensation for his time and trouble for appearing in London to give evidence at the trial in which Sir Richd Arkwright was proved to be the sole inventor of the spinning jenny.' Arkwright was a close friend and the sum seems surprising; Darwin and Watt had supported Arkwright's claim to the patent for his 'water-frame' in the Court of the Common Pleas in February and June 1785 (on the first occasion Arkwright's patent was upheld, but on the second it was dismissed, due to an inadequate specification); NPG 136 must date from 1790 or after; Darwin subsequently attended Arkwright in his final illness and wrote a warm obituary notice of him in the Derby Mercury, 9 August 1792 (D. King-Hele, Erasmus Darwin, 1999, pp 204-06, 274).