1 of 5 portraits of Thomas Augustine Arne 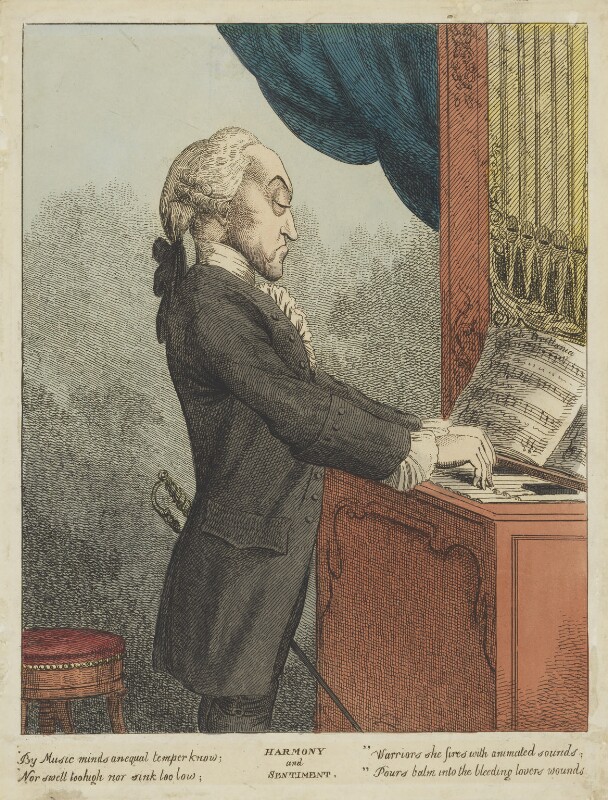 Titled: HARMONY AND SENTIMENT/‘By Music minds an equal temper know;/Nor swell too high nor sink too low;/Warriors she fires with animated sounds;/Pours balm into the bleeding lovers wounds’ [Rule Britannia].

NPG 1130 ultimately derives from the caricature drawing by Bartolozzi at Windsor [1] which, in turn, as Oppé suggested, may have been inspired by a caricature by P. L. Ghezzi [2] of the Italian musician Filippo San Felice. The Bartolozzi may date from c.1770 according to costume and the sitter’s age; it was engraved anonymously in 1782, [3] the plate differing in detail in the coat buttons, the cuff buttonholes, the elaborated organ case, and the omission of the candlestick. A second, more finished, Bartolozzi drawing, sold Christie’s, 8 May 1975, lot 153, compares more closely with this engraving. [4]
NPG 1130 popularises the Bartolozzi design: the figure is extended to three-quarter length, and a stool, upright organ case and curtain are added, together with the music of Rule Britannia and the execrable verses from the text.