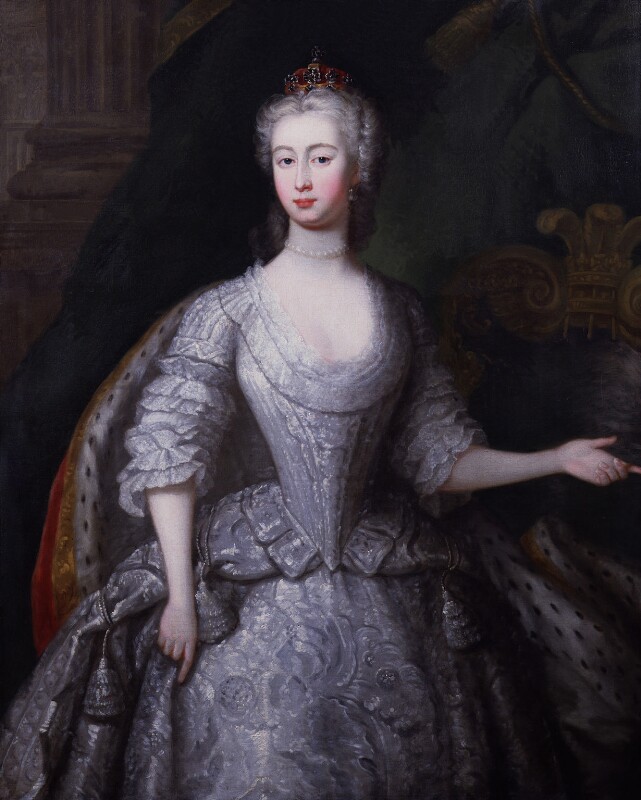 Signed on the base of the column, the initials in monogram: C Philips pinx

Companion portraits of Augusta and Frederick, at Christie's, 25 February 1924, lot 130, were stated to be signed and dated 1736 which, if correct, suggests that the original of NPG 2093 is perhaps associated with the sitter's marriage in April that year. The earliest reliable date for the prototype is 1737, a version at Rokeby [1] and Faber junior's engraving being so dated. A full-length pair, the portrait of Augusta signed and dated 1737, bought from the Turnor sale, Christie's, 4 December 1931, lot 25, is now in the Royal Collection (Sir Oliver Millar, The Tudor Stuart and Early Georgian Pictures in the collection of Her Majesty The Queen, 1963, 531, 532) and an elaborate seated variant, also signed and dated 1737 showing the Princess nursing her daughter Augusta, born 31 October 1737, is at Warwick Castle.

Bought, 1925, from Charles Newman of Duke Street, who also offered the companion portrait of Frederick; both presumably from Sotheby's, 31 January 1924, lots 96 and 97, property of A. M. Champernowne, removed from Dartington Hall and stated in the sale catalogue to have been given to Dr John Hollings, then court physician, who married a Champernowne; according to the Dictionary of National Biography, however, it was one of Hollings' daughters who married a Champernowne.

View all known portraits for Augusta of Saxe-Gotha, Princess of Wales