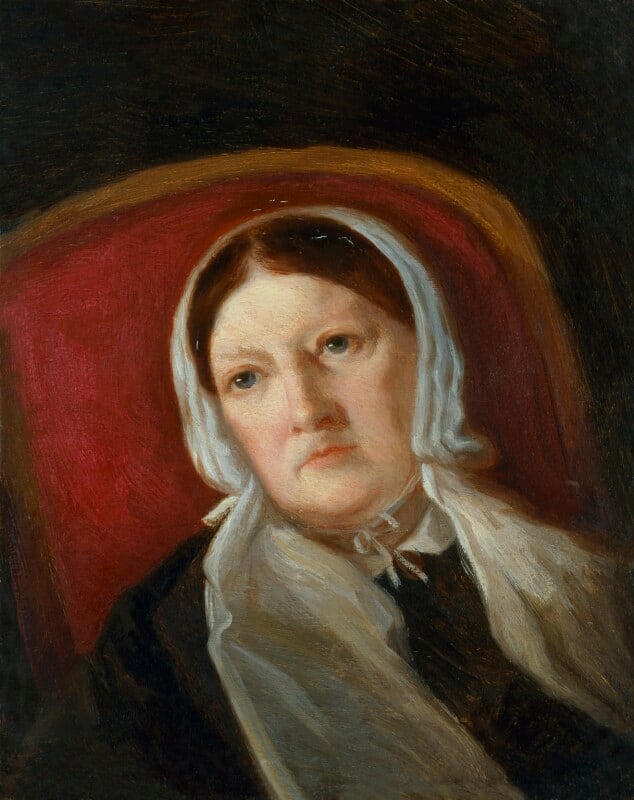 In a letter of 12 June 1879 (NPG archives), Lady Arthur Russell offered this portrait to the NPG, stating that it had been painted about twelve years before, and that it was authentic, but not disclosing the fact that she was the artist. On 2 August Scharf replied to her husband, saying that doubt had been cast on the likeness by several of the NPG trustees, and that he must know the name of the artist, adding:

'I miss however the grey tint round the mouth, and a piercing look about the eyes when I knew her. Here the person represented appears to be an invalid, & has different colured hair from that which I remember.'
On 5 August Lord Arthur Russell replied :

'When Lady Arthur gave you her portrait of Mrs Austin she did not tell you that she had painted it as she was very anxious that you should not be in the least fettered in your decision.
The picture was painted from life a short time before Mrs Austin's death when she was very unwell. She was then on a visit to my mother-in-law in the country in France. She then still wore her hair dyed auburn, perhaps you remember her a little later when she showed her grey hair.
The portrait is exceedingly like to my mind, and was thought so by all who saw it at the time & that is the only reason why Lady Arthur thought of offering it to you.
She sincerely hopes you will make no scruple about returning it, if the Trustees feel doubts about accepting it, and she is flattered by your personal opinion of the painting.' [1]
Richard Ormond

1) Letters from the artist, her husband, the sitter's nephew, Henry Reeve, and G. Scharf, relating to the portrait and its presentation (NPG archives).

The artist, presented by her, 1879. Letters from the artist, her husband, the sitter's nephew, Henry Reeve, and G. Scharf, relating to the portrait and its presentation (NPG archives).