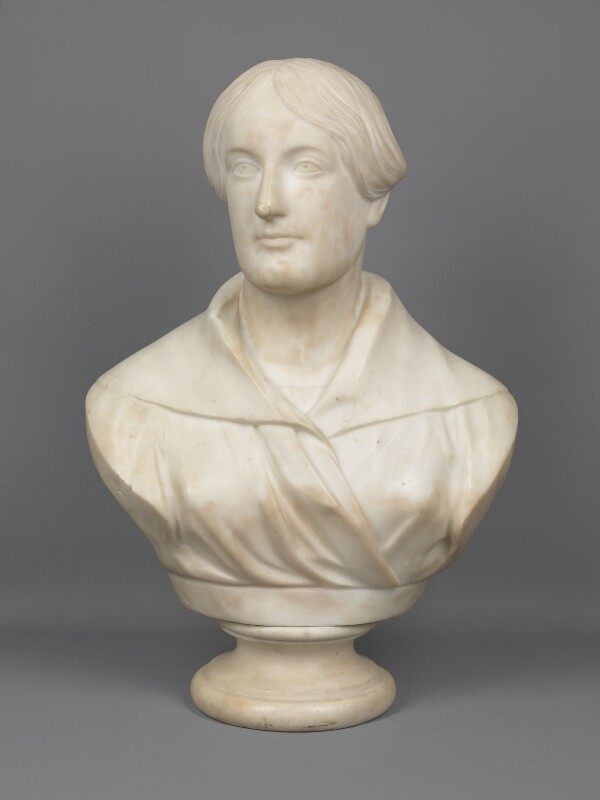 Incised on the shoulder and below: GRACE DARLING./BY D. DUNBAR SC.

Dunbar was the first artist to arrive in Bamburgh on 6 October 1838 after the rescue. Three weeks later an advertisement in the Berwick and Kelso Warder (27 October 1838) read:

'Busts of Grace Darling and her Father
Mr Dunbar most respectfully intimates that he has during the present month, modelled Busts of the above Humane Individuals at their residence, Longstone Lighthouse, Fern Islands, and which are about to be published, and which may be seen, at his Rooms in Oxford Street, Newcastle, or in Villers Street, Sunderland. Finished casts one guinea each.'
Besides the edition of plaster casts, Dunbar executed three busts of Grace Darling in marble, the NPG version, presumably commissioned by Maltby from the artist, another version in the Grace Darling Museum, Bamburgh, and a third in the collection of the Royal National LifeBoat Institution. The bust of Grace was praised for the way it expressed her dignity and intellectual beauty. In a letter of 24 October 1838, William Darling wrote:

'Sir,
We are all very much pleased with the likeness which Mr Dunbar has made of my daughter Grace Horsley, and myself; and we hope he may succeed with his speculation to the full extent of his wishes.
Your most obedient servant,
Wm. Darling.' [1]
Dunbar, who had previously executed some memorial busts in Bamburgh Church, almost certainly came to sculpt Grace Darling and her father at the suggestion of Robert Smeddle. Dunbar exhibited medallions of Grace and her father at the RA, 1848 (1415 and 1416).

Edward Maltby, Bishop of Durham, bequeathed by him to the National Gallery, 1859, and subsequently transferred.