4 of 6 portraits by Thomas Jones Barker 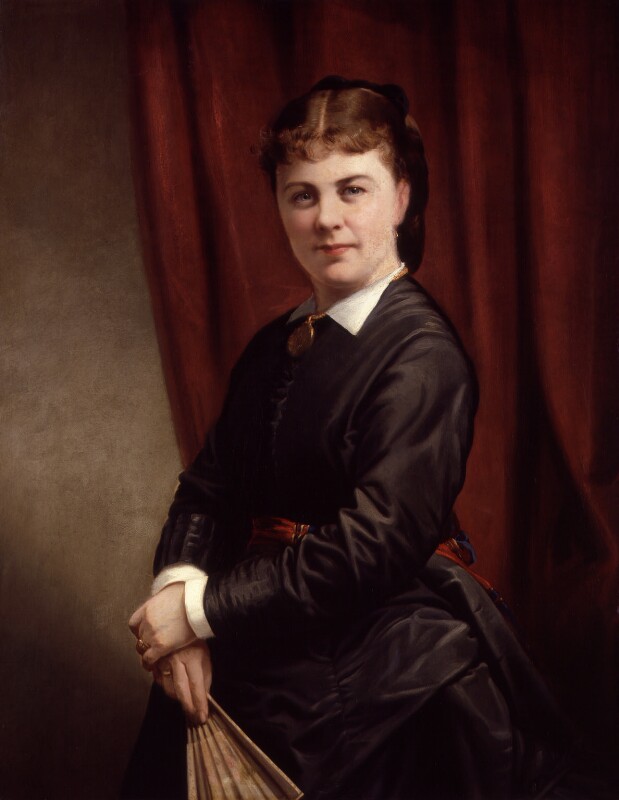 In 1874 Squire Bancroft decided to commission a portrait of his wife. This was the year of her greatest triumph, as Lady Teazle in Richard Brinsley Sheridan’s School for Scandal, which was closely followed by her performances in Edward Bulwer-Lytton’s Money and other pieces whose success enabled the Bancrofts to seek a larger theatre for their productions. From what can be seen of the sitter’s dark costume, it has deeply pleated cuffs similar to those seen in a photograph by Window & Grove from the mid-1870s (see NPG Ax18187). Marie normally dressed fashionably, so the portrait is likely to date from the heyday of the Bancrofts’ management of the Prince of Wales’s Theatre, which ended in 1879.

In 1874 I tried hard to get [Millais] to paint a portrait of my wife, and offered him a thousand pounds to do it. First he ‘shied’ at taking money from a ‘brother in Art’. Secondly, he feared he should not succeed, for this reason: ‘I know no face that it would be more difficult to tackle; it lives entirely upon expression, which is ever changing, both on the stage and off it. No, my dear fellow, the job must be done either in seconds or left alone.’ [1]

In his will Squire recorded his ‘great regret’ that Millais had declined to paint Marie’s portrait. [2]

The decision to offer the commission to Barker is not documented. One can share Squire’s disappointment, for Millais’s skill in lively portrayals of women and children might have caught Marie’s pert vivacity, whereas Barker’s work is solidly painted in what was at this date an old-fashioned style. It includes the dark red drape traditionally seen in formal portraits, presents the sitter’s plump figure, and gives her an alert, almost quizzical expression, which aims to but does not quite catch the droll charm of her stage personality. It may be compared with the marble bust by Count Gleichen (see ‘All known portraits, In private character, Paintings, drawings, sculptures and prints, 1879’). [3] The paint is laid on a thick dark brown ground in a highly finished traditional manner, beneath a smooth and very shiny varnish that has not darkened in the flesh tones, nor on the bright blue and red of the sitter’s sash, just visible.

In his memoirs, Squire recalled ‘chatting happily’ with Millais at a dinner party when Lillie Langtry had been introduced to London society around 1877, [4] and similarities between the works suggest that Barker was consciously emulating Millais’s 1878 presentation of Langtry in A Jersey Lily (RA 1878 (307); Jersey MAG, St Helier), perhaps at Squire’s request. Both images show the sitter three-quarter-length to left, standing, wearing a black dress with white collar and cuffs against a red-brown background; Marie holds a fan, Langtry a small lily. Another possible comparison is Millais’s portrait of Louise Jopling (Grosvenor Gallery, 1880 (49); NPG 6612), in which the sitter turns towards the viewer, as in the present work.

Barker died in March 1882, so this work is among his last paintings. His obituary described him as a portraitist and painter of military subjects, [5] and it is for works like The Relief of Lucknow, 1857 (1859; NPG 5851) and The Charge of the Light Brigade (1877; Defence Academy of the United Kingdom, Shrivenham, Wiltshire) that he is now known.

The work may have originally hung in a private room at the Haymarket Theatre. Together with the companion portrait of Squire (see ‘BANCROFT, Sir Squire, All known portraits, In private character, Paintings, drawings, sculptures and prints, 1880’), it was first exhibited at the Victorian Era Exhibition in 1897, which marked Queen Victoria’s diamond jubilee. From 1917 it hung in the Bancroft apartment in the Albany [6] until Squire’s death, when it was bequeathed to the National Portrait Gallery by him, together with the portrait of himself by Hugh Goldwin Riviere (NPG 2121). When this bequest was communicated to the Gallery, some reservations were raised. Acknowledging ‘some difficulties as to [the bequest’s] likely acceptance’, owing to restricted wall-space, the Bancrofts’ son replied: ‘The portrait of my father particularly is very large indeed, and that of my mother by an unknown artist of 50 years ago … is, I can assure you, quite large enough!’ [7] However, in June 1926 both works were accepted by the Trustees.