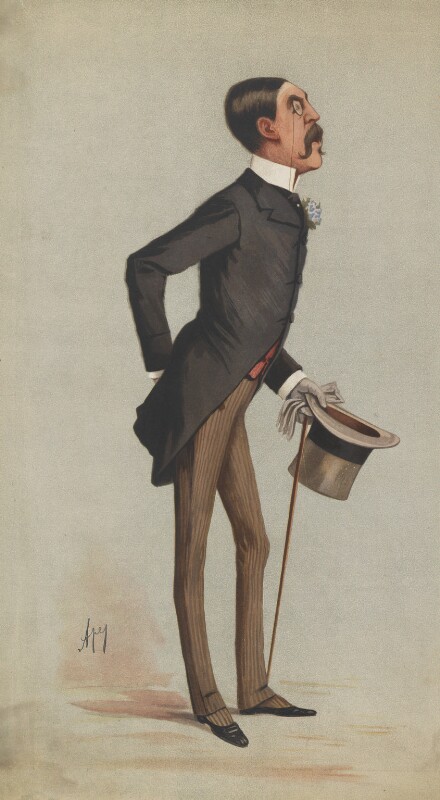 This unusual portrayal of Squire Bancroft, which shows him with elongated moustache and smooth rather than crisp curled hair, conveying a ‘Burlington Bertie’ appearance, depicts him in the role of Captain Hawtree in the successful comedy drama Caste by Thomas William Robertson. It appears to be an unpublished chromolithograph based on the original watercolour caricature now in the Garrick Club collection; there are no other impressions.

First produced on 6 April 1867, Caste was one of the Bancrofts’ greatest theatrical successes (see ‘BANCROFT, Marie Effie, All known portraits, In stage character, Caste, Photographs, 1867’). Squire’s role was described as ‘a striking character after his own heart’ portraying a ‘comic dandy or fop’. [1] Rather than the fair-haired man with long flaxen whiskers suggested by the dramatist, however, Squire succeeded in reversing expectations; as he recalled, ‘At the time, I was by more than one person thought to be mad for venturing to clothe what was supposed to be, more or less, a comic part in the quietest of fashionable clothes, and to appear as a pale-faced man with short, straight black hair.’ [2]. A contemporary described Bancroft’s Hawtree as ‘a monumental picture of Swelldom, unequalled, in its combination of grotesqueness and good breeding, by any stage Swell of [our] time’. [3]

Performances of Caste resumed at the Prince of Wales’s Theatre in September 1867 and the production was revived during the 1871–2 winter season, when it was equally well received:

Not a vacant seat in the stalls, boxes full, dress circle full, every place occupied; and not only this but the same air of refinement, that unmistakable stamp of audience with which it is pleasant to associate, and which makes a visit to the Prince of Wales’s one of the pleasantest treats which can fall to the lot of the playgoer. [4]

Squire was highly praised for his portrayal of Hawtree: ‘Could nine hundred and ninety-nine actors out of a thousand suppress or avoid the farcical, or make the part the magnetising human study Bancroft made of it?’ [5]

There followed a short season at the Standard Theatre in Shoreditch in summer 1873. Five years later Caste was revived at the Haymarket Theatre, opening on 11 January 1879. During this run, a magazine article on ‘celebrities at home’ described an evening at the Bancrofts’ home in Cavendish Square:

Mrs Bancroft’s pretty drawing-room is occupied by men and women celebrated in the world of politics, law, literature, and art. The talk to-night is – among a hundred things – of Caste and Mr Bancroft’s Hawtree, declared on all hands impossible of achievement by anybody but a soldier, until the host observes ‘I never miss an opportunity of explaining that I never was a soldier in my life, either regular or volunteer, although you are good enough to say that Hawtree is too perfect to have been done by anybody but a soldier. Perhaps you are caught by the swinging walk, and the knack of carrying the sword. It is merely the result of observation’. [6]

The play was again revived in 1883, when ‘positively for the last times’ Squire and Marie appeared in their original roles. [7] Seats were in great demand on the final night, 13 April, when the audience queued in the Haymarket from an early hour, and the performance received a highly enthusiastic reception. [8]

The drawing in the Garrick Club is signed and inscribed on a now detached portion of the mount ‘To my friend J.L. Toole / Carlo Pellegrini / August [1883]’, [9] and it can be inferred that the present work is also from around this date. Its style being in keeping with others by Pellegrini, it has been mistakenly assumed that the caricature was drawn for Vanity Fair, but it was not published there.

The acquaintance of artist and sitter was of long standing. The Bancrofts’ memoirs record Pellegrini’s presence at the Prince of Wales’s Theatre early in 1868, at a performance of the comedy that succeeded Caste, noting that ‘his amazing caricatures, with the now historic signature “Ape” were then first attracting attention’. Squire then continued:

Pellegrini drew some special and rather elaborate caricatures of Irving as Benedick [see NPG 5073] and of myself as Captain Hawtree. No ‘sittings’ were ever given for his work, his notes for them being taken generally when the subject did not know it, and the sketches made from memory. Later on he painted a portrait in oils of me, and, in a characteristic note said, ‘I have sent your fac simile to the Grosvenor Gallery: I hope you will be well hanged – I mean the portrait.’ Poor ‘Pelican’! – a most amusing creature, and a fund of merriment to his multitude of friends. [10]

The oil here mentioned is one of three known likenesses by Pellegrini. Many years after the artist’s death, Squire published ‘a few lines in memory of the prince of caricaturists’:

We knew him throughout his career and always enjoyed his company. On one evening when he gave it to us, on being announced, he kissed my wife’s hand and uttered some compliment in Italian; she immediately, in a spirit of fun, rapidly recited an old and rather long ‘proverb’ in his language, which she had learnt by heart, as a child – it being her sole acquaintance with Italian – the little man’s expression of amazement was a study. [11]

Repeating his earlier recollection, he added: ‘I sat to Pellegrini once, when he began to paint portraits seriously – the idea was soon abandoned … I saw the “Pelican” – as Pellegrini was called by his friends – in his last illness at his rooms in Mortimer Street. Shortly before the peaceful end he said pathetically to his faithful servant: “Wil-li-am, put me on clean shirt – I die clean.”’ [12]

Squire’s 1909 recollection seems to place the caricature at a date earlier than Pellegrini’s portrait shown at the Grosvenor Gallery in summer 1880 (see ‘All known portraits, In private character, Paintings, drawings, sculptures and prints, 1880’). Over his ‘Ape’ signature Pellegrini’s works appeared almost weekly in Vanity Fair through 1874–5 and it is possible that the caricature was drawn around this time, when two Ape caricatures of actors in character (Henry Irving as Mathias in The Bells – see ‘IRVING, Sir Henry, All known portraits, In stage character, The Bells, 1874’ – and Tommaso Salvini as Othello) appeared in Vanity Fair. But Caste was not playing at this period, and it is more likely that the caricature dates (as the inscription suggests) from the highly successful and final season in 1883.

That latter date would align it fairly closely with Pellegrini’s caricature of Irving as Benedick (NPG 5073). These two works entered the National Portrait Gallery collection at the same time, together with three similar items, although unfortunately the circumstances of their acquisition do not assist with dating or provenance. An internal memorandum of 26 April 1976 records:

The following drawings were recently found in a drawer in the Registrar’s Office. Nothing can be discovered about their previous history and they are therefore assumed to be deposits of long ago – unrecorded and unclaimed for. They have now become part of the collection, and are given the Registered Numbers of 5072 to 5076. [13]

If drawn for Vanity Fair, the reason the Squire Bancroft caricature was not published there remains unexplained. Nine years later, after Pellegrini’s death, Vanity Fair published a portrait of Squire by ‘Spy’ (Sir Leslie Ward) (see ‘All known portraits, In private character, Paintings, drawings, sculptures and prints, publ. 1891’), with a textual note by ‘Jehu Junior’ that alludes in customary jocular manner to Squire’s earlier career and later prosperity:

He began life unluckily, for he was born on a Friday; but has since spent just fifty years in the vain effort to compass by force of example the extermination of an ancient superstition. Left fatherless while still a boy, he was fortunate enough to be uncursed with a competence; and, his luck still pursuing him, he chose the right profession, and sought on the stage the success which he has since so completely achieved. Having played many parts in the provinces, he came to London for the opening of the Prince of Wales’s Theatre, where he proceeded to create his part in one after another of Mr T.W. Robertson’s comedies, so that presently the ‘Bancroft part’ became quite a theatrical institution. He became lessee of the Haymarket Theatre; and he and David Garrick are popularly supposed to be the only actor-managers who have ever made fortunes solely by theatrical management. And having proved by his performance of Triplet in ‘Masks and Faces’ that he can play something beside a ‘Bancroft part’, he wisely retired from management six years ago, amid the acclamations of that fashionable public which he had made his own … He has an excellent memory, and he is such a good fellow that no-one grudges him either his successes or his luck. [14]