1 of 9 portraits by Hugh Goldwin Riviere 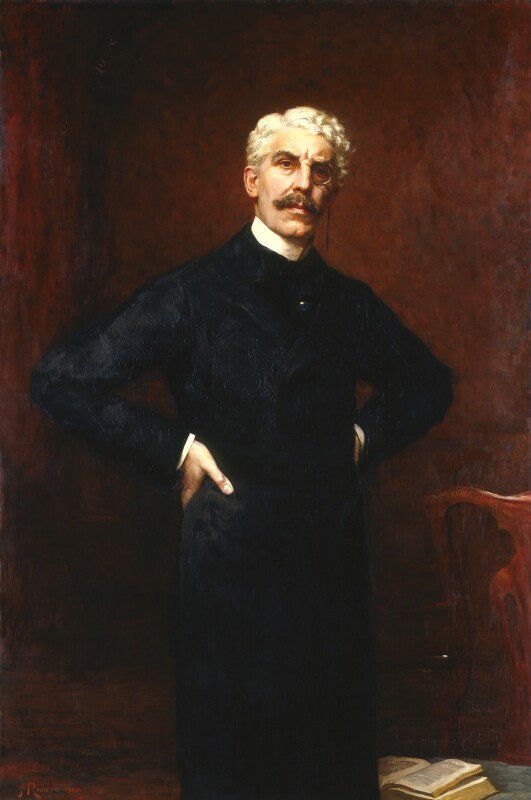 The commission for this portrait presumably came about through the Bancrofts’ acquaintance with the artist’s father, a celebrated animal painter. ‘Briton Riviere was for many years our friend. We first met in the Engadine,’ wrote Squire. ‘He was, in my opinion, a great artist, and has crowded my memory with his works, I think often of those speaking dogs in The Vacant Chair [sic], Sympathy and Charity, as I do of Circe and the amorous pigs, and the majestic Daniel facing the lions in their den.’ [1]

Squire is shown here in characteristic pose, standing with hands on hips as if arrested in the midst of some activity or having risen from the chair on which lies an open book (not apparently a playscript). His tall, lean physical presence is accentuated by the vertical view with plain background. Surprisingly, he is incorrectly depicted with an eyeglass in his left eye, raising the possibility that the portrait was completed with the assistance of photographs, which frequently showed his features reversed. His white hair contrasts with his dark moustache, and he wears a tie-pin with a blue stone.

In his memoirs, Bancroft alluded to the ‘great happiness’ of his long membership of the Garrick Club, and long service on the club’s committee, from 1877. He added: ‘Among the club’s notable collection of works of art connected with the stage, I have the honour to be represented by a replica of the portrait of myself painted for me by my young friend Hugh Riviere, the son of my old friend Briton Riviere.’ [3]

The present work, which is mentioned as hanging in his Albany apartment, [4] was bequeathed by Squire to the National Portrait Gallery, together with his wife’s portrait (see entry for NPG 2122). In February 1928 the artist complained to the Gallery about the positioning of the work. He wrote:

I am sure you agree that where the lighting of a picture can be made passably good without interfering with other work, this should be done. I refer to my rather beastly but publicly interesting Portrait of Sir Squire Bancroft … As it is hanging quite alone on the screen, a liberal tilt forward … would allow the public to see something at any rate of the Picture instead of it being just a reflection of the window. [5]

Three-quarter-length to front, standing with hands on hips against ox-blood background, monocle shown in left eye, book open on chair to right.