16 of 872 portraits matching these criteria: 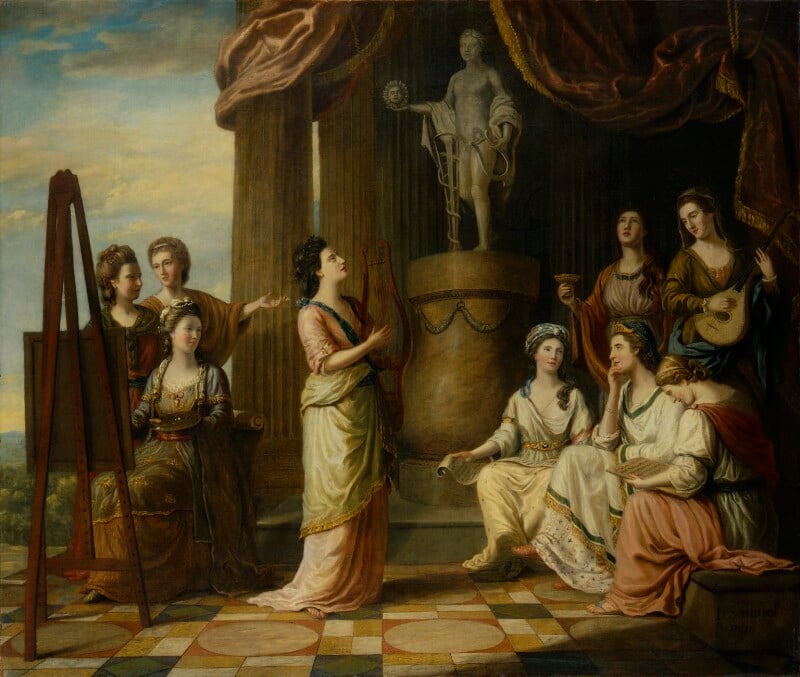 The concept of this picture is rather more interesting than its substance. It celebrates the achievements of contemporary women artists and writers, marking the passing of that ‘aversion which used to prevail against female claims to literary reputation’, [1] and it was presumably the painting exhibited by Samuel at the RA in 1779. The portraits were not named, but the intended identities may be deduced from a related but crude engraving by Page, The Nine living Muses of Great Britain, made from an earlier drawing by Samuel (it is lettered Samuel delin. Page Sculp.), published in November 1777 and printed in The Lady’s Magazine in 1778. [2]
Apart from a simplified setting, the print shows the same disposition of the nine figures (in reverse), although the faces differ, the attributes of the two standing Muses on the right in the painting have been modified (the cup is omitted and the guitar replaced by a book), and Apollo (who seems to totter on one leg in the painting) crowns the seated figure of Britannia. A key below the print identifies the Muses as: Miss Carter, Mrs Barbauld, Mrs Angelica Kauffman, on the Right hand; Mrs Sheridan, in the Middle; Mrs Lenox, Mrs Macaulay, Miss More, Mrs Montague, and Mrs Griffith, on the Left hand. They are listed below in alphabetical order:
BARBAULD, Mrs Anna Letitia, née Aikin (1743-1825), poet and writer
CARTER, Elizabeth (1717-1806), writer and translator
GRIFFITH, Mrs Elizabeth, née Griffith (1720?-93), novelist and playwright
KAUFFMANN Angelica (1741-1807), painter
LENNOX, Mrs Charlotte, née Ramsay (1720-1804), novelist and poet
MACAULAY, Mrs Catharine, née Sawbridge (1731-91), historian
MONTAGU, Mrs Elizabeth, née Robinson (1720-1800), literary critic and patron
MORE, Hannah (1745-1833), playwright and poet
SHERIDAN, Mrs Elizabeth, née Linley (1754-92), singer
Despite this key, one of the Muses, Mrs Carter, confided to another, Mrs Montagu, that ‘by the mere testimony of my own eyes, I cannot very exactly tell which is you, and which is I, and which is any body else’. [3] If Mrs Carter couldn’t recognize anyone, neither can we, and the print remains a liability in terms of portraiture. It nevertheless attracted considerable notice [4] and it would appear that NPG 4905 was a necessary (and commercial) attempt to improve upon it.
It is evident that Samuel had not received sittings from his Muses who, in 1777, were aged between 23 and 60. Even though the heads in NPG 4905 are far more personable than those in the engraving, only three plausible likenesses may be suggested: [5] Mrs Sheridan as the central figure with a lyre (she resembles her portrait by Reynolds of 1776 and she is unambigouously identified in the print caption); Angelica Kauffmann at the easel (identified by her profession as much as her likeness), and Elizabeth Montagu as perhaps the central seated figure on the right, her hand on her chin (not dissimilar to her portrait by Reynolds of 1775, engraved in 1776, or the Wedgwood medallion of 1775, while the elegance of the dress would be appropriate). Samuel apparently did not consult contemporary likenesses of Anna Barbauld, Elizabeth Carter or Catharine Macaulay, and he would in any case have had to invent the likenesses of Elizabeth Griffith, Charlotte Lennox and Hannah More, there being no recorded portraits of them by 1777.[6] The Muses are invoked for their number, sex and pedigree rather than their attributes, though Mrs Sheridan with her lyre might be equated with Erato (lyric poetry); Hannah More, whose tragedy Percy had been performed in 1774, could have been Melpomene (traditionally shown with dagger and sceptre), and the historian Mrs Macaulay, Clio (traditionally shown with quill and lute, or trumpet and book). [7]
Each of the named sitters is separately featured in this catalogue.