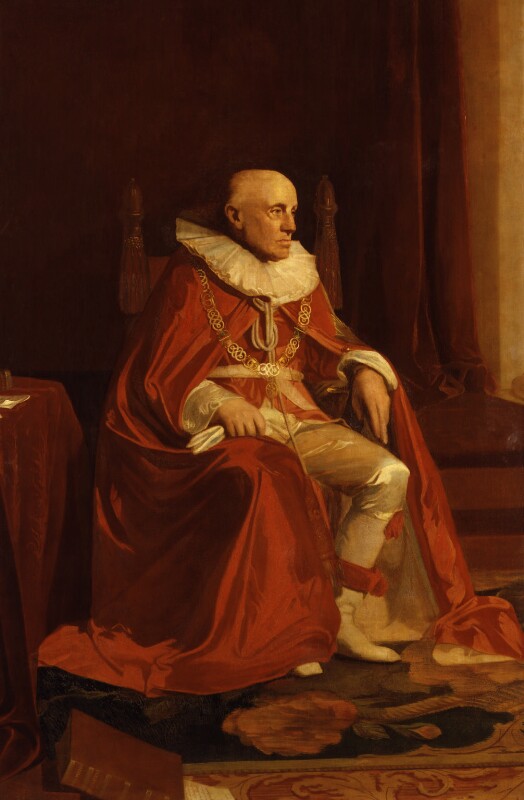 Barlow wears the robes of GCB awarded in 1815 but the portrait was painted in the late 1830s or early 1840s. Apart from the sitter's apparent age, 75 to 80, a terminus a quo of 1837 is found in the paper on the floor. This is an extract from Wellesley's letter to the Prime Minister, Henry Addington, urging Barlow's case for a baronetcy, written 27 February 1803 but not published until Montgomery Martin's The Despatches Minutes and Correspondence of the Marquess Wellesley K.G. during his administration in India, London, 1834-40. The publication of volume V in 1837 or shortly afterwards was no doubt the occasion of the portrait being commissioned. The appurtenances in the picture refer to landmarks in Barlow's controversial administration in India - the Fort William Regulations mark his services in Calcutta from 1779, and in particular the 1793 edition drafted by himself; the Fort St George 1809 volume and Lord Minto's letter refer to the draconic measures Barlow took to quell a mutiny of the European officers throughout Bengal.

Whole-length seated to right, bald-headed, aged 75-80, in robes as GCB. A piece of paper on the floor is inscribed: … a greater benefit has seldom been conferred on any people (than that which Mr Barlow was the main instrument of conferring on our native subjects in India;) to that code are principally to be ascribed the prosperity and tranquillity of these possessions and the Stability of our Power Wellesley Henry Addington Desp. Vol 5, page 426. Near this paper is a heavy leather-bound copy of the Fort William Regulations 1793. Another paper, on a table to left below a copy of Fort St George 1809, is inscribed: … of Minto to the Secy Genl of the Hon (East India) Company 11 Sepr 11 Octr 1809.

Family possession and by direct descent to his great-great-grandson C. M. Barlow of Winchester who gave it in 1974.