16 of 31 portraits matching these criteria: 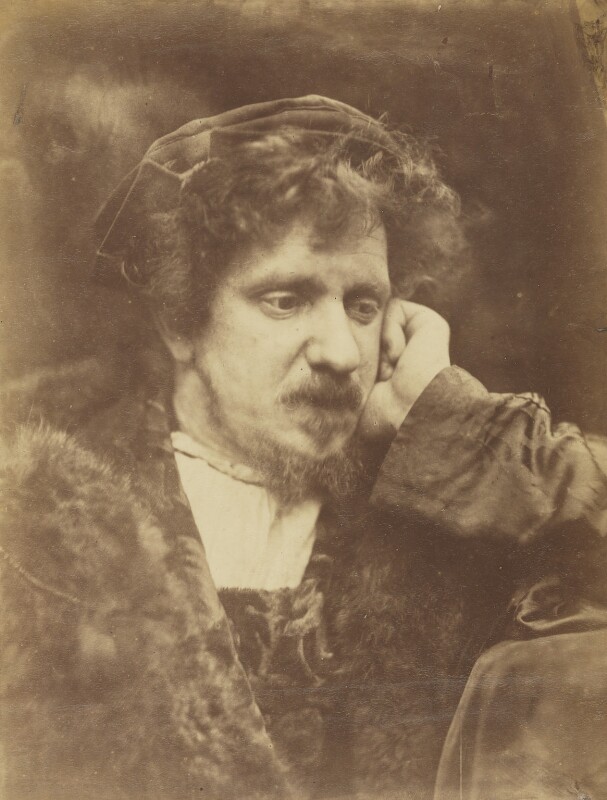 This photograph was created during the 1860s for David Wilkie Wynfield’s series of artists portrayed in historical and contemporary costume, many of which were released for sale from March 1864 under the title The Studio: A Collection of Photographic Portraits of Living Artists, taken in the style of the Old Masters, by an Amateur. Barlow’s portrait appeared in Part 5, ‘After the Flemish Schools’, which also included likenesses of William Gale (NPG P100), (Myles) Birket Foster (NPG P99) and Charles Keene (NPG P92). Although it was not with these among the ten registered for copyright by Wynfield in December 1863, it was presumably taken around the same time.

Here, Barlow, aged 40, is cast as Rembrandt, wearing a large beret and fur-trimmed jerkin over a brocade tunic and linen chemise. Although the pose differs, the composition was probably inspired by Rembrandt’s 1640 self-portrait, which was acquired by the National Gallery in 1861 (NG672) and is itself closely related to a self-portrait etching from 1639. Just as Barlow’s bulbous nose, whiskery beard and tousled hair would suggest affinities with the great Dutch master, so did his profession. As Juliet Hacking notes, ‘Wynfield’s decision to photograph Barlow (an acclaimed engraver) in the manner of a Rembrandt self-portrait is almost certainly a response to the contemporary revival of interest in Rembrandt’s engravings.’[1]

G.F.Watts commended Wynfield’s depiction of Barlow when he wrote to Julia Margaret Cameron: ‘The jewel of perfection I speak of is best found because it exists in connection with extraordinary artistic qualities in some 3 or 4 of Winfield’s [sic]: Val [Prinsep], Fred Walker & Oldham Barlow and one or two others’.[2]

While information on the exact relations between photographer and subject is scant, Barlow was a close friend of the painters Richard Ansdell (NPG P70) and John Phillip (NPG P80), whom Wynfield also photographed for the series.

There is a duplicate print in the National Portrait Gallery, NPG P90. Additional prints of this photograph are in the collection at the Royal Academy of Arts, London (03/5554) and Birmingham Museum and Art Gallery (1978P428); another was recorded at Sotheby’s, 10 May 2001 (102).

Quarter-length to right, in historical costume, left hand to face.