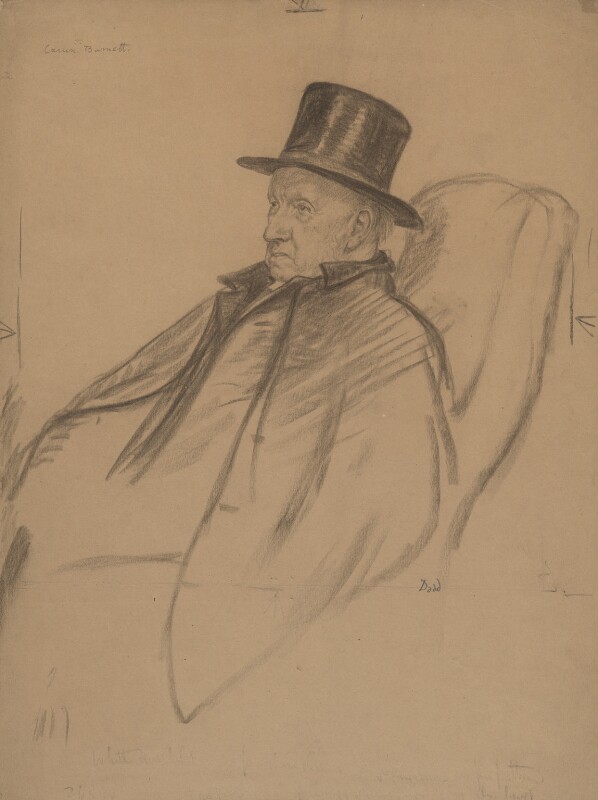 This fairly swiftly executed study of Barnett in his sixties appears to have been drawn on a public occasion, since Barnett is wearing an overcoat and top hat despite being seated in what seems to be a high-backed armchair. The precise date and circumstances are unknown, but the likeness is evidently drawn from life. It is not known where Dodd may have seen Barnett, although it would appear to have been a secular rather than religious occasion, when Barnett would have worn canonical dress.

In Dodd’s drawing Barnett looks elderly and morose, which despite ill health was not his usual demeanour when attending public events. It was used, with significant adjustments of aspect and expression, as the basis for an etching (see below). The date of the print accords with Barnett’s appearance in the drawing. By 1907 he had retired from both Toynbee Hall and St Jude’s church and been installed as a canon at Westminster Abbey, with attached lodging, periods of residence and formal duties. He was not at ease there among conservative churchmen, and endeavoured to involve laymen and women in Abbey events, as two comments from April 1907 illustrate:

The University of London is coming to the Abbey on the 8th. The sweet girl graduates want to wear their academicals. This is pain and grief to the Dean – girls in Church with college caps! I have got some shots into his prejudices, and hope they may die before the day is out, or we shall have the woman raging about us.

We had a meeting of twenty workmen here on Thursday to arrange for a course of lectures in the Abbey. I did not know them sufficiently well to get at their opinions, but they were keen abut the lectures, and on June 1st I expect 700 workmen in the nave. [1]

Barnett supported the Liberal government elected in 1906, which was starting to implement a programme of social reform. The Barnetts met regularly with key public figures, including prime minister Henry Campbell-Bannerman and political scientists Sidney and Beatrice Webb, who were then developing the national health insurance scheme. [2]

Francis Dodd was a painter and etcher (see his self-portrait NPG D17835) who studied at Glasgow School of Art, settled in Manchester in 1895, and moved to London in 1904. He exhibited at the New English Art Club from 1894 and was a member from 1904. The present drawing is one of the earliest of the 52 works by Dodd in the National Portrait Gallery’s Collection. In 1905 he had drawn William Booth of the Salvation Army, preaching in Exeter Hall, London, [3] and it is possible that he intended a sequence of portraits of social reformers, or was simply sympathetic to their endeavours.

The present drawing has pencil markings on all sides, indicating a cropped area measuring 272 x 287 millimetres that cuts off the lower part of Barnett’s overcoat. There is also an extensive pencil inscription along the lower edge of the sheet, which has been almost completely erased. It is not known if the marks and inscription relate to possible plans to reproduce or mount the drawing, or to another purpose. The work was recreated in reverse aspect as a drypoint etching entitled The Tall Shiner in allusion to Barnett’s tall black silk hat (see ‘All known portraits, Paintings, drawings, sculptures and prints, 1907’). This shows Barnett in an upright head-and-shoulders pose, his face well-illuminated and his gaze eager and alert, endowing him with a more youthful appearance than is conveyed in the drawing. Possibly Dodd added the brighter expression he had observed when Barnett was in active mode. The style of both sketch and etching are similar in technique to Dodd’s portrait of architect Charles Holden (NPG 4427), which was likewise used as the basis for a reversed-aspect etching (NPG 4173), with comparable adjustments to the sitter’s appearance.

NPG 4419 was purchased, together with nine other works by Dodd (NPG 4419–4428), offered by the artist’s executors through Sir Henry Rushbury RA. Negotiations over the acquisition began in 1959 and were finally concluded in January 1965, when the price of 15 guineas each was agreed. [4] It has apparently never been exhibited.

1) Samuel Barnett to Frank Barnett 27 April 1907, quoted Barnett 1918, vol.2 p.349
2) At a lunch with the Barnetts, Beatrice outlined 'her scheme for transferring all medical relief to the health authority, establishing in fact a medical church but better "kept in order" she says. Everyone would have a doctor and doctors would not be dependent on disease':Samuel Barnett to Frank Barnett 19 January 1907, quoted Barnett 1918, vol.2, p. 354; the Poor Law reform scheme thus outlined developed into the National Health Insurance Act 1911
3) see BM 1912,0828.1
4) NPG RP 4419.

The artist; his executors, from whom purchased 1965.