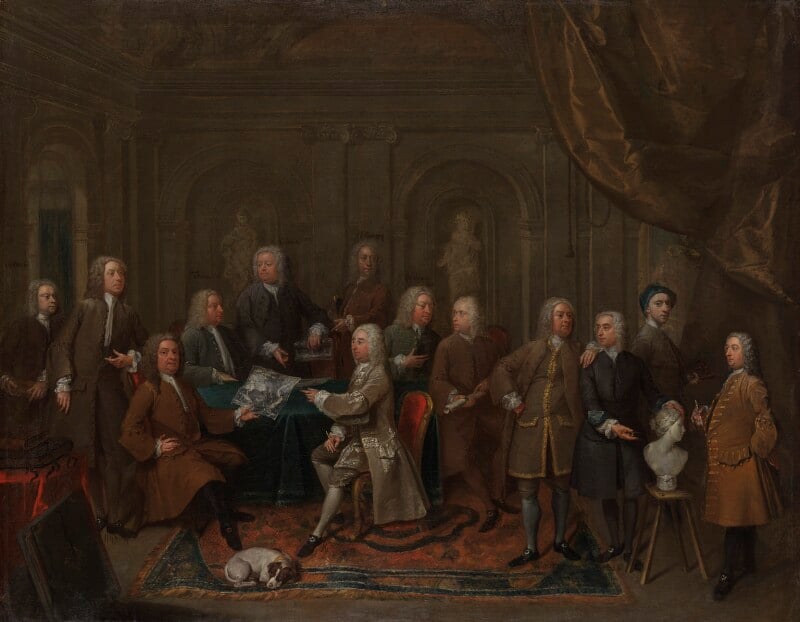 Formerly catalogued as ‘A Club of Artists', Vertue's description of NPG 1384 is here restored. He must have first seen the picture in its unfinished state with only ten figures, mentioning it in an account of Hamilton's work towards the end of 1734: 'But the piece of a Conversation of Virtuosis that usually meet at the Kings Armes. New bond Street a noted tavern. is truly a Master piece as far as is done. truly shews him a Master of Art. the persons there represented. are ten' [1] Then follows the list of sitters, sketched with a key: ‘Mr. Dahl, Mr. Wm Thomas. Mr. Gibbs, Mr. Hysing Mr. Bridgman. Gardner. Mr. Baron Engraver. Mr. Wooton. Mr. Rysbrake statuary. Mr Robinson a Gent. & Mr. Kent Vertue. Jos Goupy. and Gn Hamilton pictor.' [2] The names of Vertue, Goupy and Hamilton are the last three in the list, while in the key, Goupy is numbered 11, Vertue 12, and Hamilton is not indicated. Kent is behind the bust near Hamilton's present position. Consequently, Hamilton may have been added later, and indeed, the paint is thin here.
There is little problem concerning the identity of the sitters except for Thomas who is rather obscure. Mrs Finberg suggests that he may be the 'steward to the Earl of Oxford' mentioned by Vertue in 1732 as having his head modelled by Rysbrack. [3] He was co-arbitrator with Gibbs in 1723 for the Oxford chapel, Marylebone Road. Two successive William Thomases, treated as one by Redgrave, are distinguished by Colvin, and judging by age, he must be the earlier one. [4] Robinson is surely correctly identified by the provenance and information in Brayley to which Mrs Finberg drew attention. The father of the famous Mrs Montagu and an accomplished artist, his great nephew states he 'excelled most of the professional artists of his day in landscape'. [5]

The painting appears to have been commissioned under rather unusual circumstances. Vertue relates a proposition to promote 'the Interest of Mr. Hamilton' by which each sitter paid four guineas and the completed picture was raffled, the winner being Goupy, who later sold it to the Prince of Wales. [6] This has not been verified, however. Horace Walpole, who confused Joseph with his uncle Louis (d. 1747), apparently knew a Goupy sale in March 1765 which included ‘a piece in oil by Hamilton with portraits of several artists', [7] where, Mrs Finberg suggests very plausibly, it could have been bought by Robinson. [8] This sale is not otherwise recorded; a posthumous Joseph Goupy sale, Langford and Son, 3 April 1770, lot 1826, does not contain anything identifiable as NPG 1384.
The question of whether the painting represents a particular club of artists is too involved for lengthy discussion here. In favour is the suggestion of regular meetings - 'usually meets' in Vertue's description - but Mrs Webb's view that the Society of Virtuosi of St Luke is depicted should be approached with caution. [9] The venue of St Luke's is not known so late. While the group includes seven persons who had been stewards of St Luke's by this date, Bridgman, Dahl, Gibbs, Goupy, Rysbrack and Vertue, Kent was not elected until 1743. Goupy deserted in 1727 when his turn came to be steward, whose costly duty it was to provide hospitality on the annual feast day. It seems unlikely that he would have been included. Seven of the artists, Baron, Gibbs, Hamilton, Hysing, Rysbrack, Vertue and Wootton, were members of the less exalted and less restrained Rose and Crown Club, possibly by this date, though this is not altogether certain. But this usually met at the Rose and Crown in Covent Garden, not at the Kings Arms in New Bond Street, and Vertue provides a pretty full account of its membership, which does not include the other five sitters. [10]
Vertue, it will be noted, does not himself use the term 'club', but simply refers to the picture as 'A Conversation of Virtuosis'. Despite the title of the club The Virtuosi or St Luke's Club found in his manuscript, [11] it seems safer for the present to regard 'Virtuosis', which occurs elsewhere in his notes, [12] as a near synonym for cognoscenti and artists. NPG 1384, then, may be considered a painting in which members of both clubs happen to occur, rather than as either club in session.
It has been suggested that the group of fifteen figures in the Ashmolean Museum once attributed to Hogarth may be by Hamilton and may even be connected with NPG 1384, but it is not well preserved, and fuller investigation would require confrontation of the two pictures. The Ashmolean group was described by J. B. Nichols in 1833 as a 'Portraits of a Society of Artists, that existed about 1730' [13] It is stated in 1827 to have born an inscription which included 'Hamilton, Dahl, Laroon, Gibbon or Gibson, Rysbrach, Vanderbank, Bridgman and Kent'. [14] Both references are nearly a century later. While the style is reminiscent of NPG 1384, the composition is not sufficiently connected with it. Five of those named were members of the Rose and Crown club: Gibson, Hamilton, Laroon, Rysbrack and Vanderbank, but the others are not known to have belonged to it.

From left to right, the names inscribed with black: in brown, holding book with both hands, Vertue G; in grey, leaning on back of chair, Hyssing; in brown, seated, holding a landscape drawing, Dahl; seated behind the table in blue, Thomas Aht (?); [1] looking at the latter, holding a rolled paper, wearing slate grey suit, Gibbs mr (?); gesturing left, in brown, J. Gouppy; seated, near side of table, in grey suit with silver lace frogging, Robinson; leaning right, in light blue, Bridgeman/Gar; in pale brown, holding scroll, looking back towards him, Barren (?); [2] in pale brown coat, pale green waistcoat with gold lace, resting his left hand on the shoulder of the next, Woolet (originally Wooton); [3] in dark grey, holding dividers, his left hand on an antique female bust, Rysbrac St.; behind the bust, holding brush and palette, Hamilton (without inscription); holding dividers, in mid-brown coat, Kent; large room; rear wall divided by pilasters, male and female statues in niches; brown carpet with blue edging; a dog lying between the feet of Dahl and Robinson; far left, table with two large books, a third book on the floor, leaning against it; top right, a curtain drawn back.

Purchased, 1904, from Miss Elizabeth Montagu, great granddaughter of Mathew Robinson; in Brayley's description, 1808, of the Robinson house, Mount Morris, Horton, Kent, in which the family is said to be 'still in possession of the picture'; [1] this suggests that it may originally have belonged to Robinson, although the identity of its first owner is uncertain.