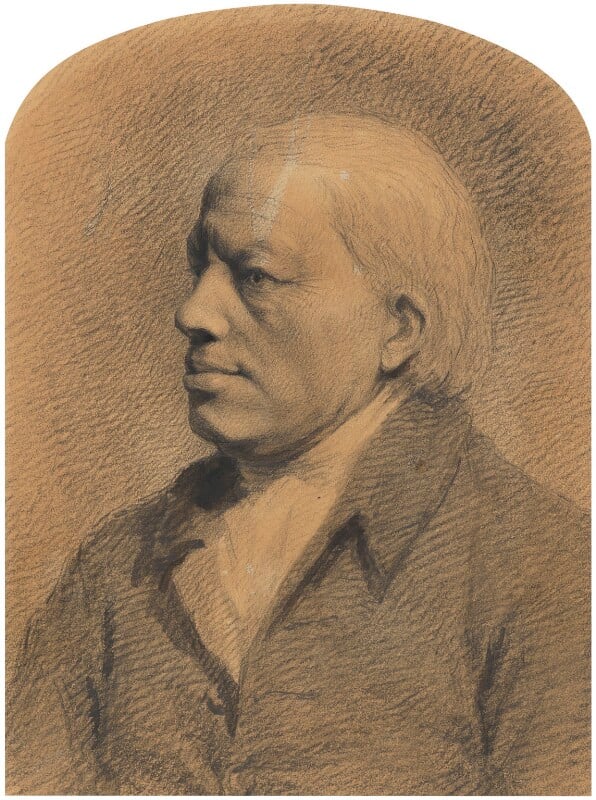 Inscribed in pencil James Barry R.A. (the inscription on a folded area)

Picart’s engraving, used as the frontispiece for Barry’s Works, described NPG 441 as drawn ‘from an original Cast, taken a short time before his Death’ (a contemporary annotation in the NPG copy of Barry’s Works alters ‘short’ to ‘some’). The mask referred to was conceivably made, as Pressly first supposed, [1] by W. J. Coffee in preparation for a Coade stone bust. Through Picart’s engraving, it became the most familiar image of Barry, and drawings by John Jackson, [2] William Blake [3] and J. M. Brighty [4] were based upon it.
Despite his appearance in NPG 441, Barry’s final years were spent in isolation and fearful squalor. Robert Southey remembered him c.1803 wearing a faded old coat of green baize ‘covered with incrustations of paint and dirt’, living alone ‘in a house which was never cleaned’ and afraid to venture out by day lest ‘the Academicians would waylay him and murder him’. [5]

Col. Francis Cunningham, from whom purchased 1877.