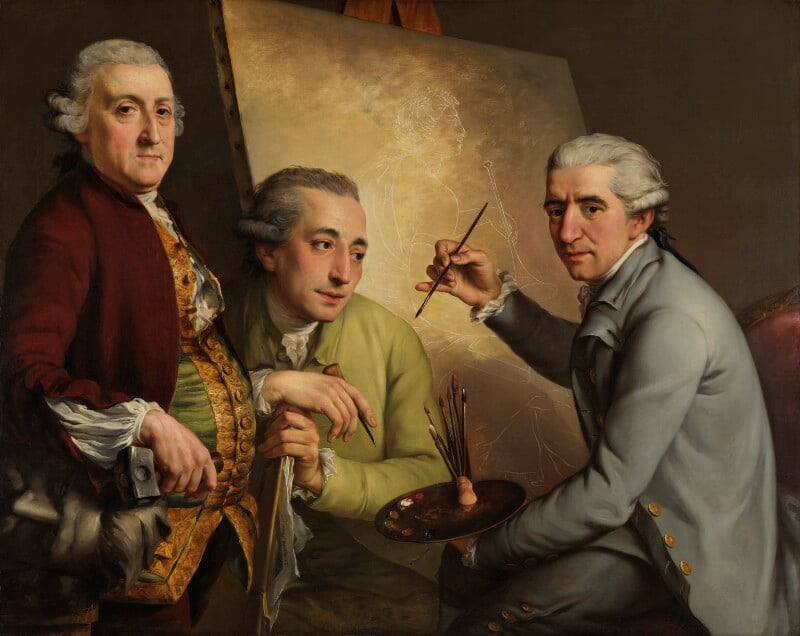 Signed on one of the engravings held by Bartolozzi: J. F. Rigaud Pinxit 1777.

NPG 3186 shows from the left:
Agostino Carlini (c.1718-90): brown eyes, powdered wig, deep red coat and breeches, green gold-trimmed waistcoat, white shirt, a hammer in his right hand which rests on a stone figure (of a River God?).
Francesco Bartolozzi (1727-1815): brown eyes, powdered grey hair, pale green coat, green waistcoat and breeches, a burin in his right hand holding up a portfolio of engravings with his right
Giovanni Battista Cipriani (1727-85): brown eyes, white powdered hair, grey suit with gold buttons, sitting in a red-upholstered chair, painting the wreathed figure of Fame with a trumpet and book on the canvas before him.
Rigaud, from Turin, had arrived in London in 1771. Here he painted an Italian sculptor, engraver and painter, each of whom had been a founder member of the Royal Academy in London in 1768. Spatially the composition is a little awkward, with Bartolozzi perched uncomfortably between his companions, but the artist's son considered it

'an interesting group of three Italian Artists Royal Academicians, - Cipriani the painter, Carlini the Sculptor, (who held the Office of Keeper of the Royal Academy,) and Bartolozzi the engraver; - all extremely like; (The two last I well remember, and they were strikingly so.) ... (The Portrait of Cipriani is, I believe, the only one that was ever taken of that celebrated Artist).' [1]
The Florentines Bartolozzi and Cipriani, exact contemporaries, had first met in Hugford’s studio in Florence; they then separated, Bartolozzi to Venice to study under Wagner, and Cipriani to Rome where he met Chambers and Wilton, who were jointly responsible for bringing him to London in 1756. When Bartolozzi came to London in 1764 he shared lodgings with Cipriani in Golden Square. Cipriani worked in collaboration with both Chambers and Wilton and his reputation as a decorative artist was greatly facilitated by Bartolozzi’s engravings. Carlini, from Genoa, had settled in England by 1760; he also worked for Chambers at Somerset House.
Each sitter is featured separately in this catalogue.