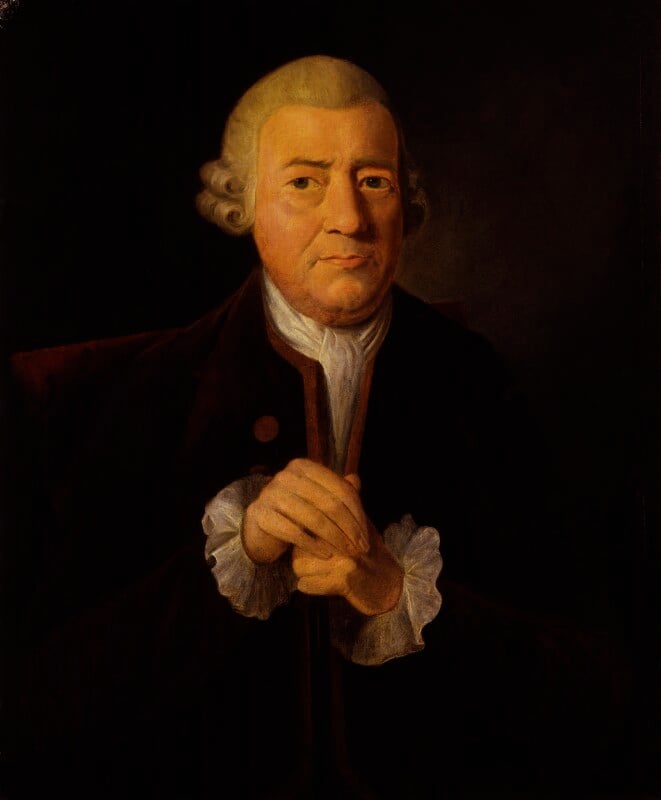 NPG 1394 is a version of the one known portrait of Baskerville by James Millar of Birmingham (fl. 1771-90), and although no references are known in the sitter's lifetime, the pedigree of the original can be traced to his family. The type was engraved as Baskerville by Rothwell, probably T. Rothwell of Birmingham (d. 1807), and is one of four known versions.
The first is the Millar portrait signed and dated 1774 presented, 1940, to Birmingham City Museum and Art Gallery [1] by the Rev. A. H. Caldicott, a descendant of Knott's successor on the Birmingham Gazette. It had been bought by Knott at the sale of the sitter's step­daughter Mrs Ruston some time before 1825. [2] A copy by Raven, engraved by Lee and Craig for Hansard, c.1825, [3] is possibly the signed miniature by Samuel Raven (1775-1847) on the lid of a japanned papier-maché box transferred from the Midland Institute to Birmingham Museum and Art Gallery c.1958 [4]. The box itself is known as the work of Henry Clay (d. 1812). A further copy 'passed into the possession of Mr Joseph Parkes', [5] formerly of Birmingham, some years before 1861 [6] but is not mentioned in the sale of his pictures, Christie's, 8 May 1858. It may be either NPG 1394 or the copy that appeared at Christie's, 30 July 1965, lot 338, as Garrick by Gainsborough. The last version, clearly a copy when compared with the Ruston portrait of 1744, belonged to the publishers Longman's by 1852 [7] when ascribed to Gainsborough or 'Exteth, pupil of Hogarth'. [8] In 1855 it was in the care of Bennet Woodcroft, clerk to the commissioners of patents, and transferred from the Patent Office to the Science Museum in 1883.
R. Straus, after seeing the Ruston portrait, suggested that NPG 1394 was possibly a copy by Raven [9] but this artist is not known to have painted life size.

Considerable retouchings in the face, especially on the right of his chin.

Bought, 1905, from W. Gilbert of London; previous history unknown but possibly the copy once owned by Joseph Parkes.

Engraved by Rothwell, without sitter's name; the plate for the engraving was apparently 'bought at Richardson's in London in 1813'. [1]