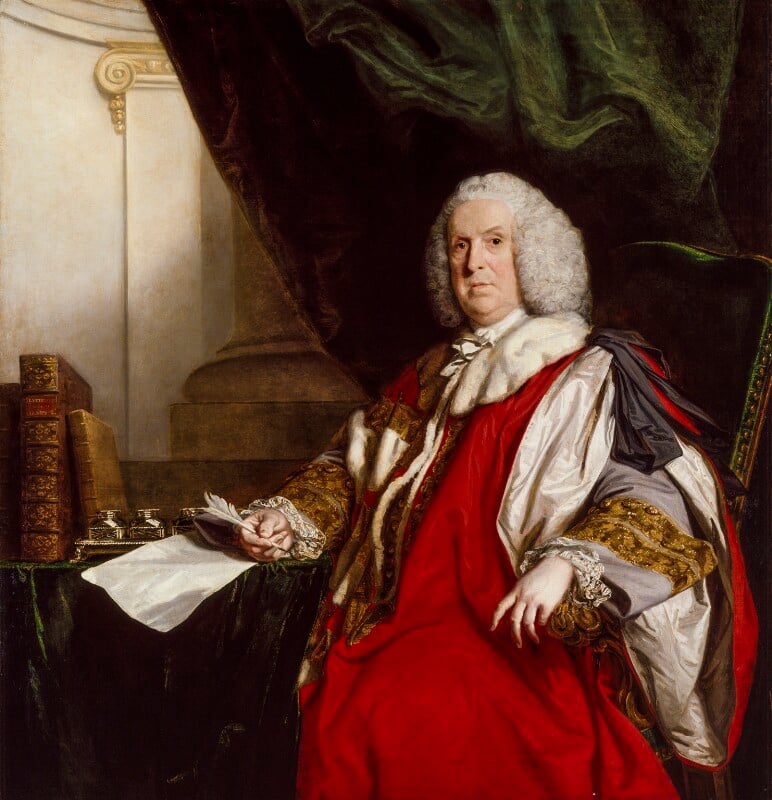 Painted for Mrs Elizabeth Montagu in 1761 and given to her by the sitter, NPG 337 is a documented example of the use of the drapery painter. There are appointments in the sitter book for 28 and 31 August, 17 September, 16 October and 30 December, and progress may be followed in seven letters to and from Mrs Montagu. In early September, the painting is noted as due back from the drapery painter on 15 October and presumably despatched after the sitting of the next day. It then meets with criticism and goes back to Reynolds to be altered on 30 December, after which no more sittings are recorded. Relevant sections of correspondence include Mrs Montagu writing to Elizabeth Carter, 6 September: 'I have not told you that my Lord Bath has sat twice for his picture, it will be very like him but not so handsome, as long as he lives I shall look on it with pleasure, always with reverence'. [1]
Bath himself writes to Mrs Montagu after 2 September [2]:

'I shall be in town again in a few days, but not till after the Queen's arrival, [3] for I have had the opportunity of making my excuses, in the proper place, for not attending the marriage ceremony. You will judge of the likeness of the Picture best, when I am not present, if it could speak, it would tell you, what I can scarce venture to do. How much I love and am, etc'; and again, 21 September: 'Does the Picture answer? Would it could! ... the eyes which you found fault with, would when you look intensely on them, express more than I dare venture'. [4]
Bath's letter of 15 October touches on the drapery painter:

‘... I was yesterday with Mr. Reynolds, & have fixed Fryday next at twelve, to finish the Picture. I have discovered a secret by being often at Mr. Reynolds, that I fancy, he is sorry I should know. I find that none of these great Painters finish any of their Pictures themselves. The same Person, (but who he is, I know not) works for Ramsay, Reynolds, & another, calld Hudson, my Picture will not come from that Person till Thursday night, and on Fryday it will be totally finished, and ready to send home ...'. [5]
The 'Person' could be Alexander Vanhaecken mentioned in 1752-3 in the accounts of Thomas Hudson, Coutts Bank archives, perhaps the younger brother of Joseph Vanhaecken, who is known to have worked as drapery painter for the artists named by Bath. [6] Joseph's death in 1749 is recorded by Vertue [7] and there are references to payments, 1751, in the accounts of Ramsay, his executor, also at Coutts. Bath does not appear in Reynolds' sitter book under Wednesday 14 October 1761, but he is entered at noon on the 16th. The remaining letters concern corrections:

'Madam, I will sitt to Mr. Reynolds either Wednesday or Saturday next, whichever is most convenient to him, and shall be glad to meet Mr. Tristram Shandy (as you call him) or Mr. Sterne (as I must call him) there, but where it is to be you do not mention. If the alteration can be made in a quarter of an hour, it is scarce worth taking the Picture out of your house, but if it is to be altered at Mr. Reynolds' I will be there on either of the days mentioned ...’, Dec 26 1761. [8]
Bath had remarkably penetrating and brilliant eyes, noted Mrs Montagu, and one of the faults found with the painting was in the representation of this feature. On Wednesday, 30th December, there is an appointment in Reynolds' sitter book for 1.30 pm and it is to this presumably that the following extract refers:

'... On Wednesday about one of the Clock, I will most certainly be at Mr. Reynolds' to mend my sickly looks, and to sitt down in my chair, as I should do; instead of being half standing, which criticism of Mr. Sterne's I think perfectly right; as for my looks, I fear they will not be much mended by any Physick of Mr. Reynolds. He has made an old man look as if he was in pain, which an old man generally is, and so far he is right'. [9]
The final letter, from Mrs Montagu to Mrs Vesey, has been placed in 1762, [10] but it was more likely written in the last days of 1761:

'Will you my dear Mrs. Vesey go with me tomorrow at half an hour after one to Mr. Reynolds, where my Lord Bath is to sit for his picture? Where ye facetious author of Tristram Shandy is to make him smile? and where you may see the historical picture in which the Muse of Tragedy and Comedy are disputing for Mr. Garrick? ...'.

Unlined, the canvas now very frail [Editorial note, 2012: relined in 1975]; x-rays taken in 1968 show little sign of the alterations indicated by Mrs Montagu except perhaps in the narrow passage down the inner side of the wig and along the left cheek; the position of the hands may have been slightly moved.

Bought, 1872, from Henry, 6th Baron Rokeby; presumably by descent from Mrs Montagu whose property, at her death in 1800, was left to her nephew and adopted son Matthew Montagu; he succeeded as 4th Baron Rokeby in 1829. [1]