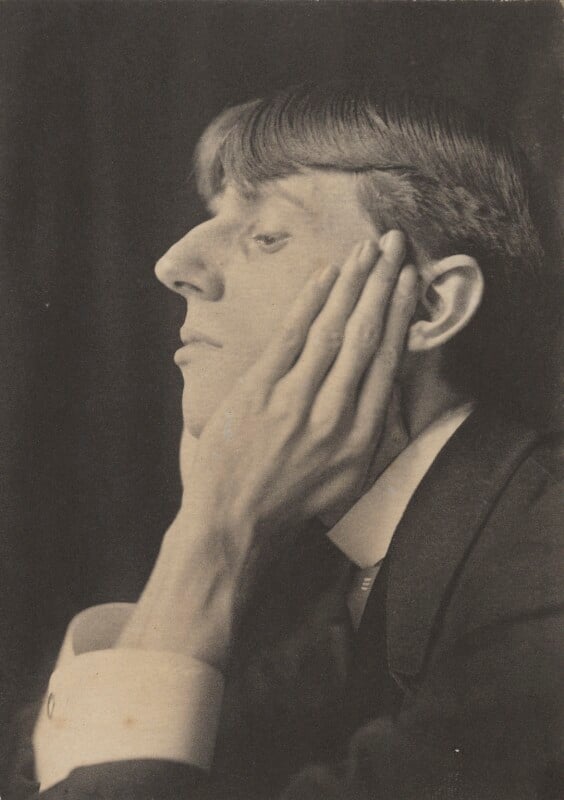 Frederick Evans was a bibliophilic bookseller in Cheapside; in 1898 he retired on an annuity to devote himself to photography, for which he had already won several prizes. A fastidious experimenter with platinum papers he advocated pure – unretouched – photography.[1]

In the early 1890s Evans’s shop (‘jam full of books’) was a haunt for collectors.[2] It was a refuge for Beardsley who from 1889 had been working as a frustrated insurance clerk in the City.[3] Evans detected ‘a certain freshness of idea, a more than hint of a positive and rare beauty of line’ in Beardsley’s drawings and acquired them in exchange for books;[4] he reproduced them as platinotypes and sold them in the shop.[5] It was Evans’s recommendation that provided Beardsley with his first break, the commission to illustrate a new edition of Thomas Malory’s Le Morte Darthur (publ. 1893). The project – which Beardsley grew to hate – enabled him to give up his clerical job in 1892 and become a full-time artist.

NPG P114 is the defining Beardsley portrait. In 1943 Evans described its origin:

[Evans] was at first puzzled to know how to tackle him. ‘There’s not much to be done with a face like yours,’ he told him. ‘You’re only a gargoyle, you know.’ Beardsley at once put his hands up to his face in the attitude made famous by the subsequent photograph. ‘That’s it! a gargoyle on Notre Dame,’ exclaimed Evans excitedly, and made the exposure.[6]

Beardsley was delighted with the results and wrote (20 Aug. 1894), ‘I think the photos are splendid; couldn’t be better’ and two months later, ‘I am so glad your photo of me was a success at the Salon. It did indeed deserve to be.’[7] This was a reference to the second Photographic Salon of the Linked Ring; Evans had exhibited a print of P114 set in a photographic surround adapted from one of the designs for Le Morte Darthur.[8] In 1919, the same year that he sold his library with its Beardsley rarities,[9] Evans published a limited edition portfolio of twelve platinotype facsimiles, Grotesques by Aubrey Beardsley, with the Morte Darthur framed P114 pose as the frontispiece.[10]

Evans’s photographs were the portraits used in early editions of Beardsley’s drawings. The NPG P114 pose appeared as the photogravure frontispiece for the first edition of The Early Work of Aubrey Beardsley (1899), and as a frontispiece for the second (1911) and later editions of The Later Work …, when the illustrations themselves were reorganized between the two volumes.

The dating of NPG P114 and NPG P115 is enigmatic. M.F. Harker (1979, p.107) gives the date as 1893. Evans himself inscribed ‘1895’ on the mounts of both, no doubt a reference to the date he made the prints rather than the date of the sitting. The date ascribed here, c.1894, is based on the Beardsley correspondence (see note 7). The Evans photographs were mounted on plain grey card or given Morte Darthur-style mounts, with ruled frames and Beardsley’s facsimile signature.[11]

A further set of three prints, c.1897, is sometimes attributed to Evans on the strength of a pencil inscription on the reverse of one of them: ‘Fred Evans Johns [sic] & Evans 77 Queen’s St. Cheapside E.C.’. The prints show Beardsley in a checked tweed jacket and waistcoat and round stiff collar, and are the only ones to show him with hair slicked back and no fringe; the finest example is at Princeton (see ‘All known portraits, Photographs, c.1897’). They are good quality but apparently not platinum prints, and there is no evidence that Beardsley sat to Evans a second time.

Head on hands, profile to left.

With P115 given by Dr Robert Steele, 1939; transferred from Photographs Collection 1979.

See note 11 for other original and reproductive prints of this image.


Reproductions of other prints of this image