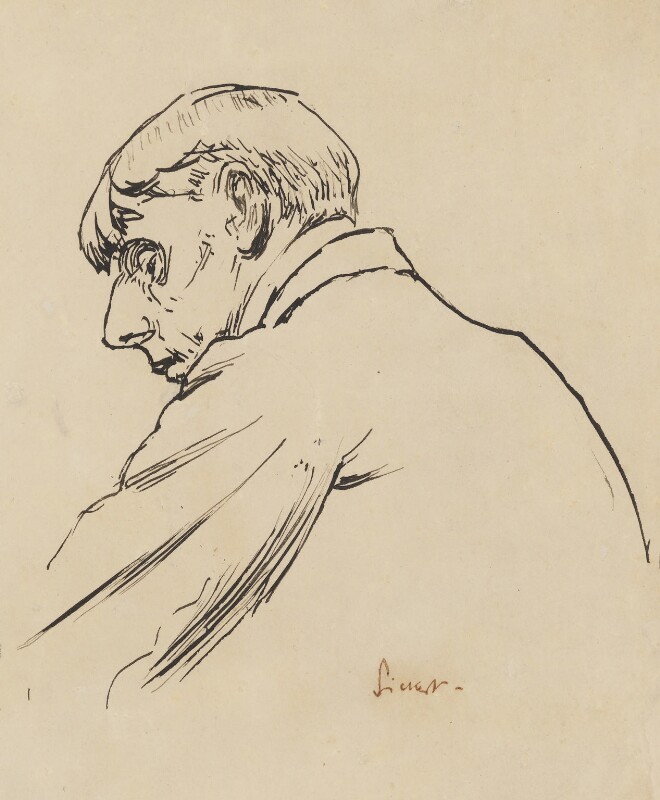 Sickert painted a whole-length ‘sketch in distemper’ of Beardsley in July 1894.[1] The first volume of The Yellow Book had been assembled earlier that year and was published in April; Sickert’s sketch was reproduced in the second volume, in July 1894.[2] Beardsley had been nominated The Yellow Book’s art editor and Sickert was one of the first he approached to contribute drawings to the quarterly.[3] Sickert also gave Beardsley his ‘first and last’ lesson in painting and advised him on the ratio of black to white in his drawings; the two men knew each other through New English Art Club circles and from visits to Normandy coastal resorts such as Dieppe in the 1890s.[4]

NPG 1967 is unrelated to the whole-length though it probably belongs to the same year. It is believed to have been drawn in the Beardsleys’ drawing-room at 114 Cambridge Street, Pimlico and (unusually) captures Beardsley in an unselfconscious pose, hunched away from the viewer. Another Cambridge Street drawing by Sickert showing Beardsley seated to the left in a winged armchair, c.1895, is presently untraced.[5]

Half-length, profile to left, bent over.

Purchased from Messrs Ernest Brown and Phillips, The Leicester Galleries, 1922.