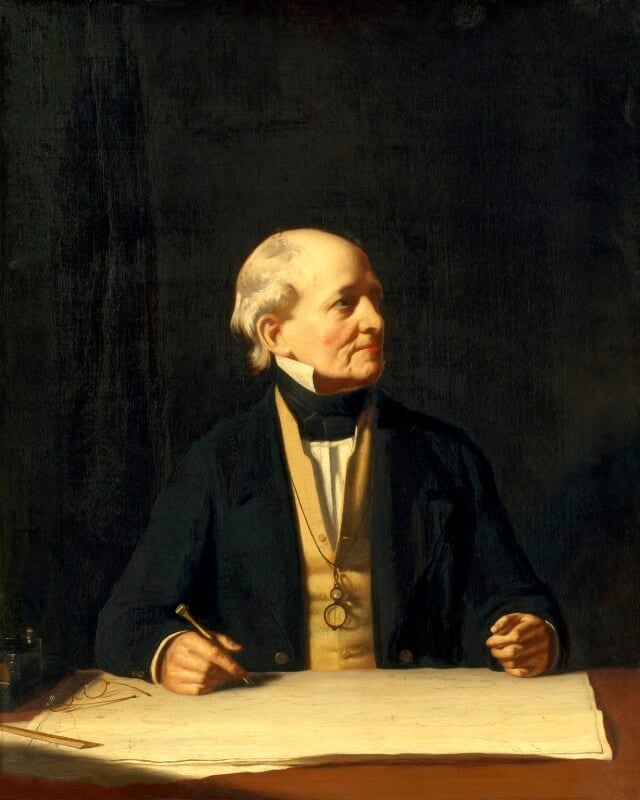 This is a study for Pearce's 'Arctic Council' (see NPG 1208), as well as an autonomous portrait in its own right. Pose, features and costume are identical with those in the group, except for a differently coloured waistcoat (yellow in the study, dark brown in the group). According to a memorandum by Pearce of c.1899 (NPG archives), the study was painted in 1850. Pearce used the NPG study, in conjunction with further sittings, for the three-quarter length portrait of Beaufort of 1855-6 in the National Maritime Museum, Greenwich, exhibited RA, 1857 (354), engraved by J. Scott, published H. Graves & Co, 1857 (example in NPG). The latter was commissioned by the subscribers to the Beaufort testimonial, and is mentioned in Pearce's Memories of the Past (1903), p 80, reproduced facing p 8, and in a single-sheet pamphlet published by Graves (example in NPG, 'Pearce Documents'). Pearce records painting a replica of the NPG portrait for the sitter's son, in his memorandum of c.1899. Besides the group by Pearce, and the drawing by Brockedon (see below), no other portraits of Beaufort are recorded.