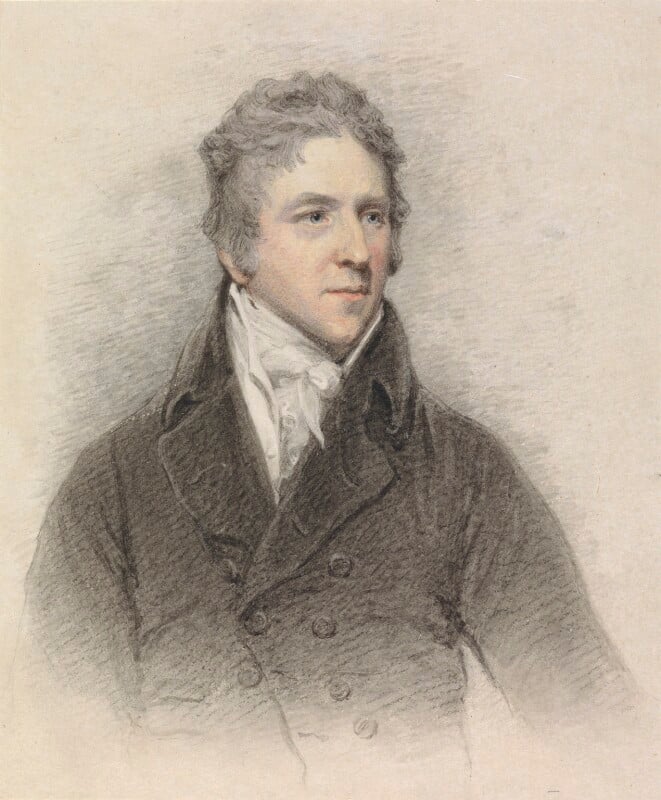 The drawing is a copy of Hoppner's portrait in the National Gallery (6333), the ascription to Wright resting on the stipple engraving of 1812 above. It had a 'distressed' appearance and could well have suffered during the engraving process, but McKay & Roberts (W. McKay & W. Roberts, John Hoppner R.A., p 17) record another Wright drawing, in India ink and colours, at Christie's (Bicknell sale) 1 May 1863 (284). Hoppner's original is probably the painting recorded in Farington's Diary 27 March 1803, 'Sir George Beaumont has sat twice to Hoppner', exhibited RA 1809 (54), given by Beaumont to Lord Mulgrave in 1810 and acquired by the National Gallery in 1962 (Margaret Greaves, Regency Patron: Sir George Beaumont, 1966, frontispiece). Versions were in the Hoppner sale 1823 (27) and Sir David Wilkie sale 30 April 1842 (674).

Half-length in a dark coat fastened with one button, white shirt and loosely knotted tie; grey eyes, his own short powdered hair.

Stipple vignette by J. S. Agar 'From an original Picture by J. HOPPNER Esq. R.A. in the Possession of the Right Honble Lord Mulgrave. Drawn by J. Wright. Engraved by J. S. Agar. Published Jan 16. 1812 ...' and used as a plate in Cadell's Contemporary Portraits, 1822, I, p 14. Say's mezzotint of the original Hoppner was published 26 December 1808.