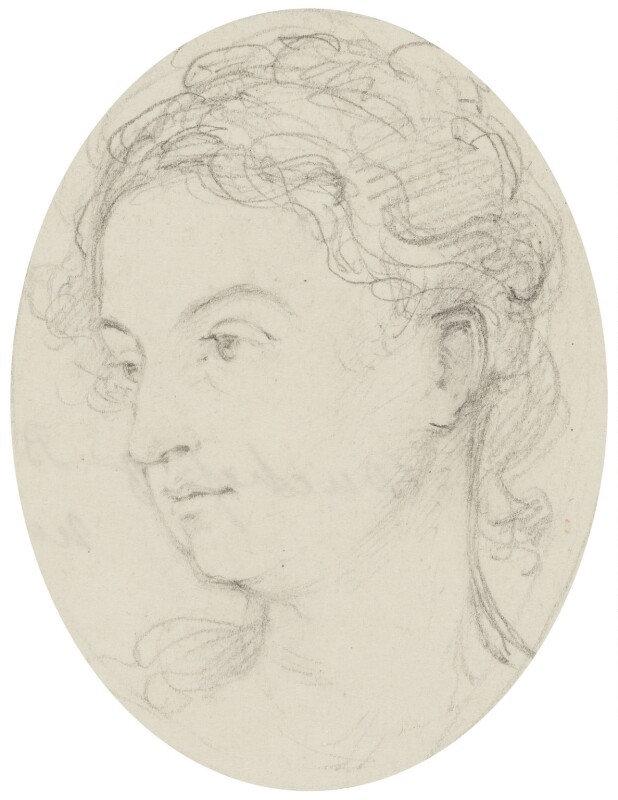 Probably an early study for a miniature, present location unknown. A drawing, signed and dated Aug 21 1819, at Sotheby's 25 May 1966 (16), was among six Hayter drawings of the Duchess, one a whole-length holding a violin. Henry Bone made an enamel after Hayter's original, probably that dated 1829 at Woburn; two Bone drawings for this enamel are in the NPG library (Henry Bone’s annotated pencil drawings for miniatures and enamels, I) - 62 an undated pen drawing on squared tracing paper, and 96 a small pencil drawing on squared paper dated May 1820; the miniature was engraved by J. H. Robinson though it differs slightly in hair-style.

These drawings [NPG 883(1-21)] are all apparently studies for miniatures, which explains their small scale, the largest (Codrington) being 17.5 x 13 (6 7/8 x 5 1/8) and most much smaller. They are drawn in pencil, some strengthened with pen and ink and colour wash, two or three quite elaborately. They were probably bought at the Hayter sale, Christie's 20 April 1871, where many of his drawings were sold in large uncatalogued lots.
They are all contained in a drawer fitting into a box bound, on acquisition in 1891, to resemble a red leather book titled on the spine: ORIGINAL DRAWINGS by Sir George Hayter/NPG.