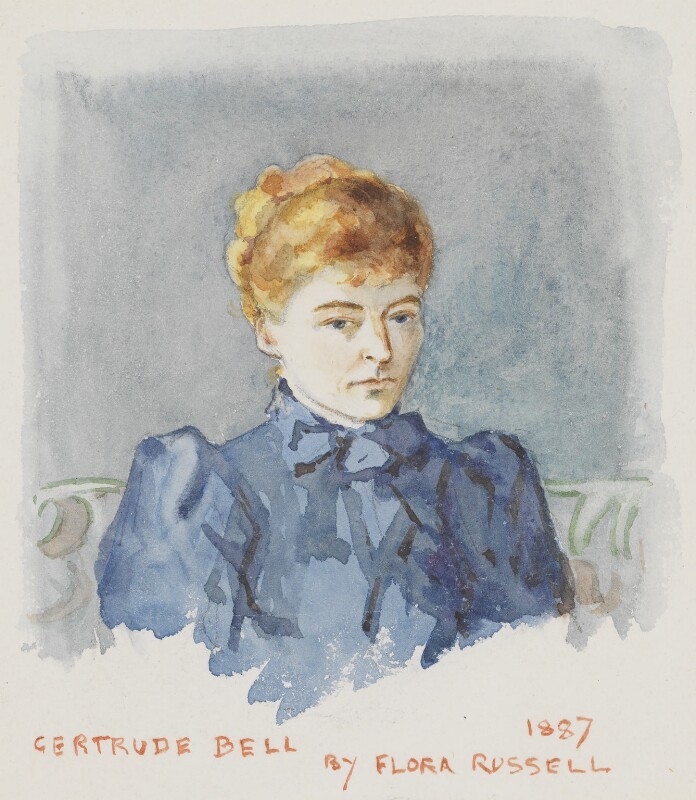 In 1887 Gertrude Bell was studying modern history at Oxford.[1] According to her detailed correspondence with her parents in Redcar, North Yorkshire, Gertrude and Flora Russell first met at a tea party in London in July 1888.[2] A second meeting occurred in December: ‘I lunched with the Arthur Russells today. They were extremely nice and asked me to come and see them again when I came back from Oxford […] Flora is very attractive – pretty, quite unaffected and intelligent. She showed me a lot of her drawings which I thought very good.’[3] The friendship seems to have developed gradually. ‘This afternoon I shopped with Flora whom I like very much, far, far, more than I ever did before,’ wrote Gertrude. ‘She is fond of me too I think and we have reached a most comfortable stage in our friendship’ (19 February 1890).[4] The two became close friends and correspondents, and they worked for the Red Cross in northern France during the winter 1914/15.

Flora Magdalen Isabel Russell, a keen amateur artist,[5] was the elder daughter of Lord Arthur Russell. She was born on 28 September 1869 and died unmarried aged 97 on 23 August 1967. In 1964 there was the possibility of a large collection of her portrait drawings coming to the National Portrait Gallery but in the end only this unframed head and shoulders of Gertrude Bell was offered to the Trustees.[6]

Below the painted inscription is a rubbed-out pencil one which seems to read ‘Gertrude Bell / about 1887?’, suggesting that the painted date may be later than the drawing. Judging by evidence in the correspondence a date after 1888 and around 1900 does seem more likely. For a drawing of Bell by Flora Russell dated 1900 see ‘All known portraits’.

NPG 4385 shows Gertrude Bell as a young woman, years before she became a distinguished traveller, archaeologist and diplomatist – the fields that earned her a place in the Dictionary of National Biography. But as she was more often carrying a camera than sitting to one, and very rarely sat to artists, the opportunity to acquire a portrait was not to be missed: ‘she [GB], a splendid example of a peculiarly English breed of woman, should certainly be here and portraits of her are very rare’ wrote the NPG director David Piper to Flora Russell.[7] The additional value of NPG 4385, in a mainly monochrome iconography, is that it indicates Gertrude Bell’s complexion and colouring as a young woman.

Off the Beaten Track: Three Centuries of Women Travellers, NPG, London, 2004 (no cat. no.)