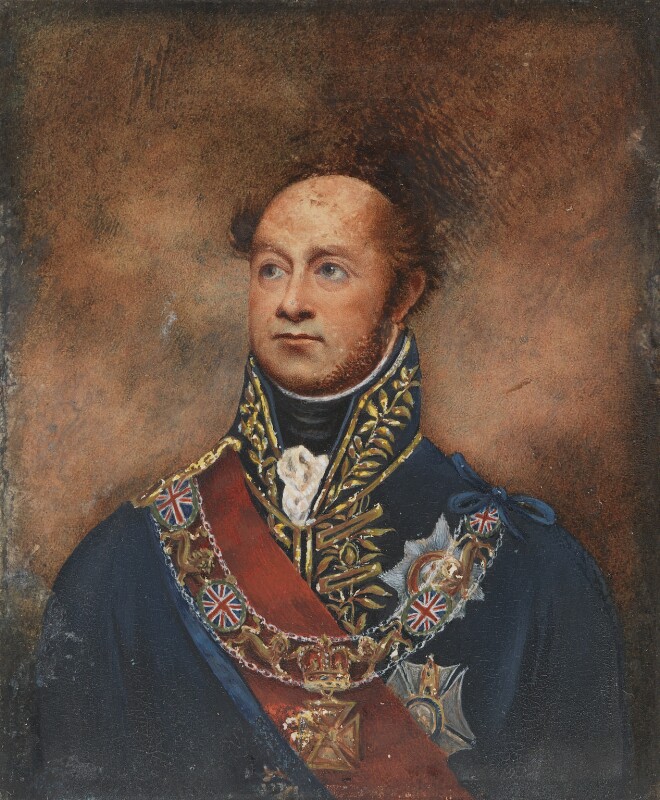 Beechey's original painting 1812-14 (not mentioned in W. Roberts, Sir William Beechey R.A., 1907 and location unknown) shows Beresford with only two Stars (Bath and Tower and Sword) and the two broad Ribbons without the Collar of Honour; a copy of this was at Christie's 30 April 1971 (15) and again 17 February 1972 (4). A later version was painted after the award of the Collar of Honour in 1814 and Turner's mezzotint made in the same year. Drawings for this Collar were first prepared in 1814 by command of the Prince Regent under the direction of Sir George Naylor, intended to commemorate the Duke's victories in the Peninsula and later altered to include the Battle of Waterloo. Wellington's Collar is in Apsley House (WM 1376.1948). E. Beresford, the copyist, was probably Elizabeth Beresford, great-granddaughter of the Marquess of Waterford, who married Felix Ladbroke of Headley, Surrey, in 1827.

Lieut.-General Sir William Warre who served with Beresford throughout the Corunna campaign and thereafter as ADC; family possession until presented by his descendant the Rev Francis Warre, Rector of Bemerton, in 1898.

(of Beechey's original)
Mezzotint by C. Turner published 21 September 1814 (Alfred Whitman, Charles Turner, 1907, 45); stipple by Tomkins published 1830 for Jerdan's National Portrait Gallery; both show the Collar of Honour with the names on the flags of the Peninsula actions Piranese, Salamanca, Vittoria and Neve.