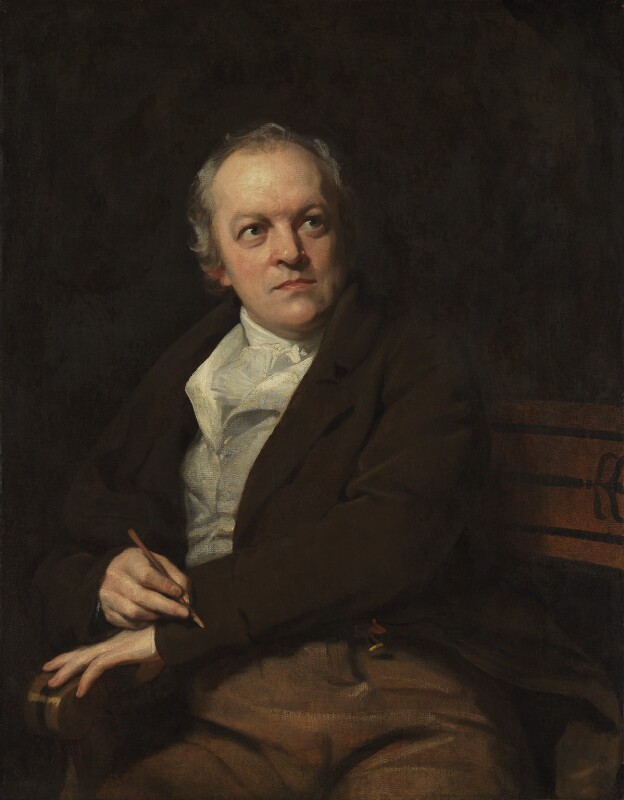 Signed with initial P and dated 1807 centre right above back of bench.

The portrait shows Blake at the age of 50 when he had completed the drawings for Blair's Grave published by R. H. Cromek in 1808 with engravings by Schiavonetti. It has been suggested that Phillips's portrait was commissioned or at least painted on the initiative of Cromek himself; but its first appearance is in Phillips's Sitter Book as 'Blake the Artist kitcat' under April 1807; an earlier reference for 'Mr Blake TQL' under November 1797 probably refers to another Blake. It certainly appears as a plate in the Grave but there is no other evidence of Cromek's responsibility. According to a rather melodramatic account in Cunningham's Cabinet Gallery of Pictures (1833, I, pp 11-13) the 'rapt poetic expression' was conjured up by Phillips's luring Blake to talk about his friendship with the archangel Gabriel. It certainly impressed the Rev Thomas Dibdin, '... his stature mean, his head big and round, his forehead broad and high, his eyes blue, large and lambent - such as my friend, Mr Phillips, has represented him upon his imperishable canvas' (Rev Thomas Dibdin, Reminiscences of a Literary Life, 1836, pp 286-7). Its subsequent history is recorded, though how it was acquired in the first place by Bishop Coplestone remains a mystery.
A half-length replica was exhibited Burlington Fine Arts Club 1876 lent by J. R. P. Kirby, later in collections of H. Buxton Forman (1881), Percy H. Muir (1945), and Philip Hofer, Houghton Library, Harvard University, reproduced in Ruthven Todd, William Blake the Artist, 1971, p 86; this was engraved by W. Bell Scott, published by Colnaghi 1881 and reproduced in Nicoll, Literary Anecdotes, 1895, frontispiece. The brushwork is flatter than in NPG 212, with the right sleeve unfinished and the coat greenish-buff instead of dark brown; it was probably painted from recollection and has a cramped look as though cut down all round; Keynes lists this as 'by an unknown artist (after Schiavonetti)' but an entry in Phillips's Sitter Book under July 1843 for 'Wm Blake Esq kitcat' may refer to this replica.

Three-quarter-length seated to left on a Regency mahogany bench inlaid with ebony (the bench may have been Blake's own property; it does not appear as a studio prop in any other portrait by Phillips); head slightly to right looking upwards, holding a pencil in right hand, his left on arm of bench; grey hair and eyebrows, prominent blue eyes, fresh complexion; dark brown frock-coat, light brown trousers, white waistcoat and cravat, gold seal with red ribbon at waist. Pasted on the stretcher is an abstract from The Saturday Review, 14 November 1853 reviewing Gilchrist's Life of William Blake.

Copper-plate by Schiavonetti published by Cromek 1 May 1808 in his edition of Robert Blair's Grave and also used as a frontispiece to Gilchrist's Life of Blake, 1880, II, Swinburne's Blake, 1906 etc. The head only was engraved by Edwards for Cunningham's Lives of the Painters, 1830, II, p 142.