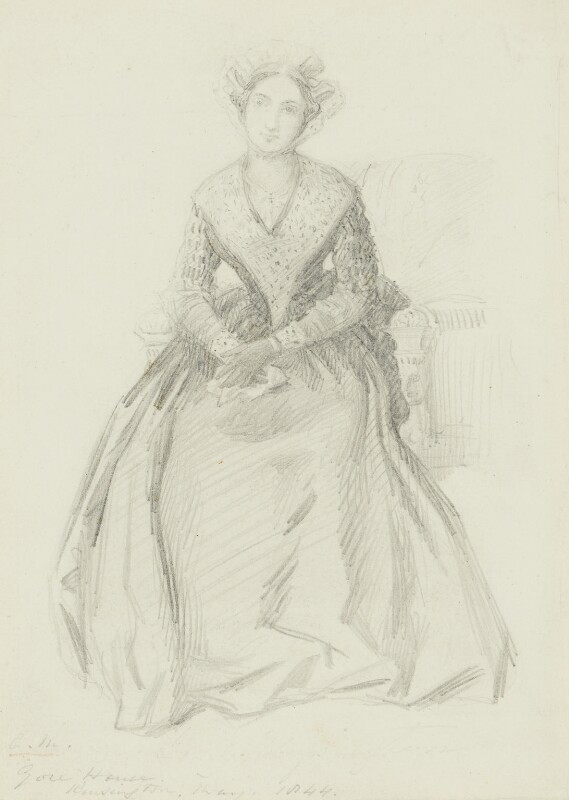 Inscribed, signed and dated in pencil (bottom left): C. M./Gore House./Kensington, May,1844
Inscribed by the artist in red crayon on the front of the mount: Gore House. Kensington/May, 1844, and in pencil in another hand, on the left of the mount: Charles Martin
Faint pencil inscription along the bottom (possibly an autograph): Lady Blessington
Inscribed on the back of the mount, in the vendor's hand: My father Charles Martin (son of John Martin) drew a large/number of Portraits of distinguished persons of the time for the/"Illustrated London News", in the forties and this is one of them/Thos. C. Martin/I often remember my father/speaking of his visit to Gore House (Albert Hall Mansions on its site)/and the handkerchief Lady B. wore. The late Queen Victoria/always was taken/with a similar/handkerchief/It was fashionable

This drawing was published as a contemporary woodcut (example in NPG), for an unidentified newspaper or magazine. It did not appear in the Illustrated London News, although Martin published several other portrait drawings there. The NPG drawing was also used for a coloured lithograph in Martin's Twelve Victorian Celebrities (1899), no.3; the lithograph, apparently dated 26 February 1844 (the name of the month is not very clear), has several accessories not shown in the NPG drawing, is more finished, and differs in some other details; the basic pose, however, is the same. Lady Blessington's letter of 14 February 1844, agreeing to sit, is reproduced in facsimile in Martin's book. Several similar drawings by Martin of other 19th century celebrities are in the British Museum, and that of Dickens is in the collection of Mrs Jane Cohen, Boston.

View all known portraits for Marguerite, Countess of Blessington